Is Hamas offering too little too late?

Hamas is willing to display flexibility in order to ease the heavy isolation it faces, but what its leaders view as a significant compromise is likely far from what Palestinian President Mahmoud Abbas is willing to accept. 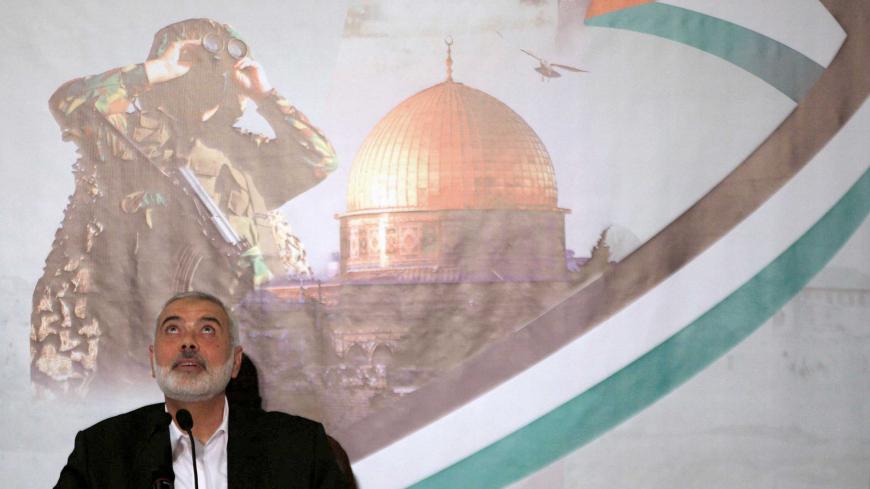 The two leaders of the rival Palestinian factions have been estranged for several years. They last spoke by phone six years ago, in 2011, when Haniyeh called Abbas to express his condolences upon the death of Abbas' brother. About a year ago, in October 2016, Haniyeh, Abbas and Khaled Meshaal, Haniyeh's predecessor, met in Qatar in what Abbas’ office described as a “random encounter.’’ They exchanged a few polite words and spoke of their desire for reconciliation. Nothing more happened after that.

This time, the call was trans-Atlantic, from Gaza to New York, where Abbas is preparing for what the Palestinian president has billed as “the speech of his life” to the UN General Assembly on Sept. 20. Haniyeh felt the time was right to remind Abbas about a possible Palestinian reconciliation and ask him not to forget to say so to the assembly.

In their talk, Haniyeh mentioned Hamas' decision to dismantle the administrative committee governing Gaza, but Abbas did not commit in return to lifting the sanctions the Palestinian Authority (PA) has imposed on Gaza. At this stage, Abbas, following the advice of his two envoys upon their return from Cairo, is treating Haniyeh and the Hamas leadership with a mix of suspicion and respect, along the lines of US President Ronald Reagan's approach to the Soviets — “trust but verify.” Despite the smiles, none of the PA brass is optimistic about the prospects of mending the rift between Fatah and Hamas, which began more than a decade ago.

“The gaps between us are major and deep, much more so than the gaps between Israel and the Palestinians,” a senior Fatah source well versed in the Cairo talks with Hamas told Al-Monitor on the condition of anonymity. It is not simply about dismantling the Gaza administration, which Hamas established in 2007 when it ousted Fatah from power in the territory. The question is also, what's next?

Will elections be held in Gaza, and if so, in what form? If Hamas loses, would it be willing to adapt to Fatah's approach of seeking a diplomatic arrangement with Israel? Will the movement’s leaders in Gaza who are now saying the magic word, “reconciliation,” accept the principles of Palestinian negotiators who are gearing up for an international struggle over the establishment of a Palestinian state? How about the biggest question of them all: Is Hamas willing to dismantle the armed militias it established before the 2007 rebellion, a virtual army that has expanded and become frighteningly more powerful than the PA’s security forces? According to the source, none of these questions were answered in the Cairo talks.

Hamas is, indeed, undergoing changes and is willing to bend somewhat to extricate itself from the isolation it faces. What seems to its leader to be a tremendous compromise, verging on ideological sacrifice, is still far from what Abbas is willing to accept. This is not to mention the international community, which regards Hamas as a terror organization. Nonetheless, Abbas will probably keep up the “reconciliation talks” being conducted in Cairo, even after the grim report by his envoys, for one simple reason. Like Hamas, he is playing the reconciliation game to prove to Egyptian President Abdel Fattah al-Sisi that they, Fatah, are the good guys. The Hamas leadership is between a rock and a hard place. They have to prove that they are willing to accept the conditions imposed by Egypt in return for opening its border and ending the siege of the beleaguered enclave.

When Fatah and Hamas formed a unity government in April 2014, it served as a local administrative council, but Hamas and Fatah then went their separate ways. Hamas decided to invest scarce resources in arming itself and digging tunnels ahead of yet another confrontation with Israel, while the aging Abbas sought international diplomatic avenues toward realizing his dream of establishing a Palestinian state while he is at the helm.

The unity government managed to survive the 2014 Israel-Gaza war and Israel's Operation Protective Edge, which resulted in thousands of Palestinian deaths and massive destruction of Gaza’s infrastructure. Nothing truly linked the two rival movements, however, not even the stark humanitarian crisis persistently afflicting Gaza’s 2 million residents, unlike the relative well-being enjoyed by residents of the PA-administered West Bank.

“Ten years of separation is a very long time,” said the Palestinian source. “You cannot turn the [clock] back.” Over the years, Hamas has become entrenched in irreconcilable positions. For example, Hamas sees itself as sole ruler of the Gaza enclave and is unwilling to accept that reconciliation also means giving up control. “Ceding control also means saying goodbye to an army that only serves them and not the Palestinian people,” the source said. “That is how the security forces in the West Bank view their role.”

The official believes that even if another unity government is formed, it will operate exactly like the previous one. “[It] did not lead to unity and did not advance reconciliation, but only served to cover up the separation between Gaza and Ramallah,” he said.

The reconciliation games will be held in Cairo and Gaza under the auspices of Egypt, which is pushing hard for the sides to reach speedy understandings. This is the only way the Egyptians can address the nightmare scenario troubling the regime: Poverty, disease and tremendous despair in Gaza will culminate in an attempt by residents to reach the border with Egypt, bring the walls crashing down, break through the siege and flood into the Sinai Peninsula, as happened in January 2008.

“Even if hundreds of thousands don’t swarm [the Egypt-Gaza border town of] Rafah, the Arab world will still hold Egypt responsible for the disaster it caused for 2 million Muslims in Gaza,” said the Palestinian source. “This is something they don’t want and fear.”

Thus, the primary rule of the game being played by Haniyeh and Abbas is to do everything possible so that the president of Egypt does not think that he is the guilty party.

by Murielle KASPRZAK and Joseph SCHMID | AFP | May 26, 2022
END_OF_DOCUMENT_TOKEN_TO_BE_REPLACED