Shock, confusion in Egypt over US aid cut

The Trump administration has cut hundreds of millions in military and economic assistance to Egypt, which has been criticized for its human rights record under President Abdel Fattah al-Sisi. 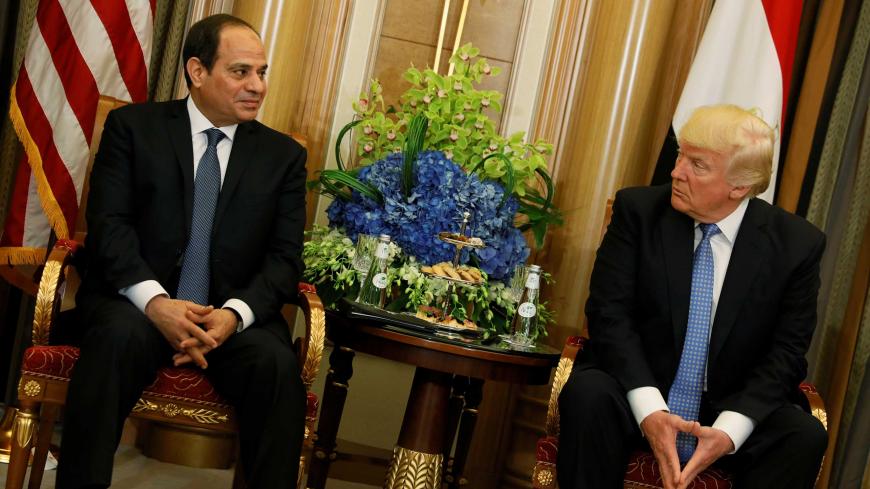 When Donald Trump was elected US president in November 2016, Egyptian President Abdel Fattah al-Sisi was the first world leader to congratulate him on his win amid rife speculation that the Trump era would herald warmer ties with Egypt. After all, this was the man who as a presidential candidate had called Sisi “a fantastic guy” and had publicly lauded the “chemistry” between them. A little over seven months into Trump’s presidency, the United States has announced it will cut nearly $100 million in economic and military aid and withhold nearly $200 million more in military financing to its key Middle Eastern ally, owing to what it said was Egypt’s poor human rights record.

The controversial US decision took many by surprise, not least the Sisi government, which reacted with shock, confusion and restrained anger. In a statement released shortly after the news was announced, Egypt’s Foreign Ministry said it regretted what it called a "misjudgment of the nature of the strategic relations that have bound the two countries for decades.” It further cautioned the cutbacks could yield "negative consequences for the realization of the two countries’ joint interests." The statement did not explain, however, what the repercussions might be.

A scheduled meeting between Foreign Minister Sameh Shoukry and White House adviser Jared Kushner (whose Cairo visit coincided with the aid cut announcement) was initially called off in what observers said was a sign of protest at the US decision, but the Egyptian diplomat-host quickly had a change of heart. The talks did take place, albeit later than originally planned. Photographs of the two men smiling and shaking hands belied earlier media reports that the meeting had been canceled.

But behind the smiles, anger is seething in Cairo. Supporters of the Sisi regime vented their dismay with an Arabic hashtag on social media networks that translates into #Egypt_is_far_bigger_than_your_aid. A cartoon published in the pro-government Youm7 newspaper depicted a man buying a pair of shoes at a Bata store to “raise in the face of America,” according to the caption. The message to the Trump administration (printed below the cartoon) was: “Egyptians could not care less about the aid.”

In reality, they do care — a lot. The country is suffering its worst economic crisis in decades, with unprecedented price increases, a burgeoning budget deficit and annual inflation rates hitting above 30% in April. Analysts warn the dire economic conditions, made worse by a slump in tourism, threaten to destabilize the country where nearly 30% of the population lives below the poverty line, according to a July 2016 survey conducted by the national statistics agency CAPMAS.

Egyptian government officials had misread the positive overtures toward Sisi from President Trump as signaling a potential increase in military and economic assistance rather than a slash in the aid. Foreign Minister Shoukry told reporters before Sisi’s April visit to the United States that continued military aid is not a “gift” but rather comes in the context of “joint interests.” After the Sisi-Trump talks at the White House, described by analysts as “cordial” and “positive,” Trump had described Sisi as “a great friend and ally [of] the United States” and said he was doing a “fantastic job in difficult circumstances.” But Sisi was not the only one fooled by the red carpet treatment afforded him during the US visit; analysts also saw the visit as a reversal of the Obama administration’s foreign policy. Not only had Trump’s predecessor denied Sisi a White House visit, but he had also largely snubbed the former general whose repressive policies and rights abuses have been widely condemned by rights groups and Egypt’s revolutionary activists.

Egypt’s human rights record, however, did not figure into those talks, nor were rights violations on the agenda at another friendly encounter between the two presidents in the Saudi capital Riyadh a little over a month later, when Trump and Sisi had again heaped lavish praise on each other. At least there was no public mention of the rights abuses allegedly practiced by the Sisi regime, much to the disappointment of rights campaigners who had hoped for a stern reprimand from the US president for the rampant abuses. Trump chose to turn a blind eye to the Egyptian regime’s misconduct — including the jailing of tens of thousands of opponents on trumped-up charges and hundreds of reported cases of torture and enforced disappearances since 2013 — and to focus instead on security and economic matters, a decision that earned him his fair share of criticism from the rights advocates and international media alike.

The US president was lambasted by the critics for “cozying up to dictators” and having a weakness for strongmen. Pundits, on the other hand, suggested that Trump’s disregard for human rights was, in fact, a strategy meant to gain more cooperation from the autocrats on the things that mattered most to America. He was simply staying true to his America-first approach, prioritizing security cooperation over everything else, they suggested.

Despite their concerns over the aid cut, Egyptian officials have downplayed the US decision as “not surprising” at a time when Trump had made no secret of reducing budget spending. In March, in announcing the US intention to cut foreign aid, White House Budget Director Mick Mulvaney explained on FOX news that “the overriding message is fairly straightforward: Less money spent overseas means more money spent at home.”

“The aid cut is a pressure tool used by the United States to further its own interests,” lawmaker Kamal Amer, who heads parliament’s National Security Committee, told Al-Monitor. “It will only serve to strengthen our resolve and determination to remain sovereign and to maintain balanced relations with all states,” he added. Amer expressed hope that the Trump administration would reconsider its decision concerning the nearly $200 million in military aid that the US has delayed pending Egypt’s progress on human rights. “Releasing the funds would be seen by the Egyptian people as a goodwill gesture and would benefit our mutual interests,” he said.

Egyptian regime critics, meanwhile, see the US decision as sending a strong message to the Sisi government to ease the repression.

“But [the aid cut] is not for the sake of democracy, which Trump cares little about; rather, it’s for the sake of stability and US interests,” prominent rights lawyer Gamal Eid told Al-Monitor. “The surge in rights violations under the Sisi regime, especially the harsh crackdown on civil society, can only fuel further dissent and ultimately lead to instability,” he warned.

Eid fears the US pressure on Egypt to improve its human rights record could backfire.

“The US decision has put Sisi in an awkward situation. Rather than ease the crackdown on dissent, Sisi may crack down even harder on his opponents for fear of being seen as succumbing to pressure from the United States.”

Hassan Nafaa, a professor of economics at Cairo University, described the aid cut as having “political rather than economic significance.”

“The US administration is sending a message that it highly disapproves of the Egyptian regime’s excesses and that it is punishing Egypt for the violations. While the US Congress was largely responsible for the decision rather than Trump himself — he has expressed his admiration for Sisi on several occasions — the aid cut could not have been announced without the US president giving his blessings to it,” Nafaa told Al-Monitor.

He lamented that US pressure can have little impact on Sisi’s “repressive” policies. “Only internal pressure can bring about the desired improvement in our human rights situation. The pressure has to come from local civil society organizations, political parties and the media. But the current atmosphere does not allow for much progress: The stifling of free expression, the weakened political parties and the public’s suspicion of any kind of political activism give little hope for change.”