Trump welcomes Egypt’s Sisi 'as is'

US President Donald Trump and Egyptian President Abdel Fattah al-Sisi seem to hit it off at the White House, but will Trump come through on the funding Sisi wants? 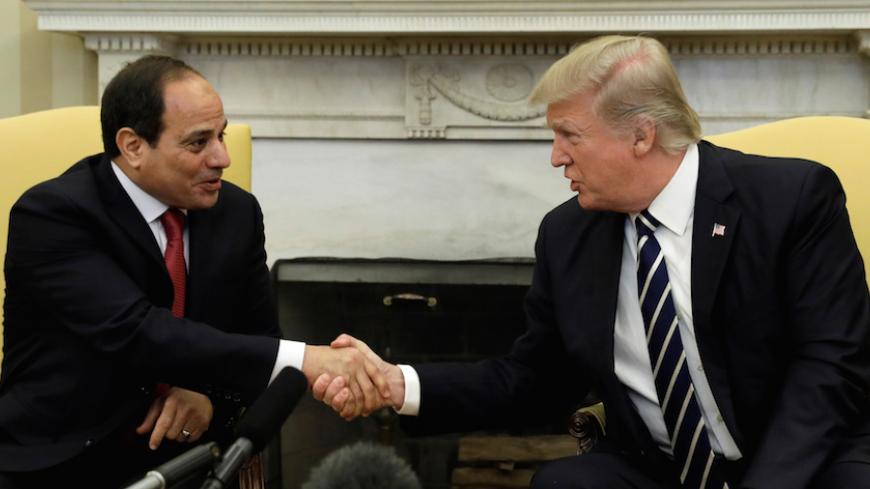 WASHINGTON — Bonding over their common interest in fighting terrorism, US President Donald Trump warmly welcomed Egyptian President Abdel Fattah al-Sisi to the White House on April 3, pledging to focus on areas of cooperation rather than chide the repressive leader on human rights and political reform.

“We agree on so many things,” Trump, relaxed and smiling, said at a brief photo session with Sisi on April 3. “I just want to let everybody know, in case there was any doubt, that we are very much behind President al-Sisi. He’s done a fantastic job in a very difficult situation. We are very much behind Egypt and the people of Egypt.”

Sisi returned the admiration, praising Trump’s strength and determination to fight terrorism, and expressing confidence in Trump’s ability to achieve an Israeli-Palestinian peace deal that has eluded the last half dozen of Trump’s predecessors.

Referring to the Israel-Palestinian conflict, Sisi continued: “You will find me supporting you very strongly and very earnestly in finding a solution to the problem of the century, and I am quite confident that you will be able to bring a solution to this issue.”

“We will,” Trump agreed. “We will do that together.”

Egypt under Sisi is more repressive and economically distressed than ever, and efforts by the past two US administrations to urge reforms have failed and damaged US-Egyptian relations, said Egypt expert Eric Trager.

“Look, the Sisi government is certainly the most repressive in Egypt’s contemporary history,” Trager said on a call with journalists hosted by the Washington Institute for Near East Policy on April 3. “There are tens of thousands of Egyptians in prison right now, significant police brutality, significant restrictions on media.”

He continued, “But the reason this is the case is because the government has seen itself as being in a ‘kill or be killed’ struggle with the Muslim Brotherhood since the overthrow of Mohammed Morsi in July 2013. And it fears that any political opening could lead to the spark that produces its demise.”

Trager said, “Now the question, of course, is, given that Egypt today is more repressive than it was six years ago and economically worse off, why has the Sisi government actually proven more durable than anything that followed [Hosni] Mubarak’s ouster? And the answer is … that the Egyptians have learned by and large over the last six years that uprisings tend to make things worse, not better. And so the mood within Egypt, despite the repressiveness and despite the economic hardship is one that is hoping that the Sisi government can get things right.”

Mideast expert Robert Satloff agreed that Sisi and Trump will bond over their common interests in fighting radical Islamist extremism and advancing a Middle East peace agreement. Trump is seeking validation from a Middle East leader for his approach to fighting terrorism, and Sisi is looking for reassurance from the American president that America accepts the Egyptian regime as it is, said Satloff, executive director of the Washington Institute for Near East policy.

What does Egypt want from the United States?

“If you ask senior Egyptian leaders … they would like President Trump to finally bury the stake in the heart of the conspiracy idea that America is conspiring to undermine the regime in Egypt,” Satloff said.

“There is a common, popular idea in Egypt, fed by conspiracy-minded media, fed by elements of the government, that America, going back two administrations, has been out to undermine the Egyptian regime — through NGOs, through democracy promotion,” Satloff said. “In the Egyptian mindset, they see this as some nefarious plot to undermine the regime.”

“What [Egyptian leaders] want most of all is confirmation from President Trump that America embraces the Egyptian regime as it is,” Satloff said. “Yes, reforms are needed, yes, there is room for improvement. … But at its fundamental, America embraces this regime and is putting an end to the idea of fundamental change. If they get that and they can walk arm in arm, president to president, that will be viewed as turning a page in the relationship and restoring a strategic partnership.”

Egypt also seeks economic assistance from the United States, which may be a harder ask during the Trump administration, which has pledged to cut foreign aid.

“Egypt wants assistance, but our cupboard is bare,” Satloff said. “It will be a tough sell even to maintain the same level of assistance.”

Trager said, “Where the rubber will hit the road, is Sisi will likely ask for more economic aid and more military aid … and I think this will be difficult for President Trump to meet.”

Ultimately, “we are likely to see a relationship between Cairo and Washington that is more positive in terms of the ‘optics’ and relationship between the two presidents,” Trager said. “But I don’t think that we are going to see a substantial deepening of ties because, from Cairo’s viewpoint, so much of that is tied to the request for more aid.”

Critics of Sisi’s repressive regime and US policy toward Egypt say Trump has an opportunity to rethink what it is getting for its decades of support to the Egyptian government.

Robert Kagan, a Brookings Institution scholar, and Michele Dunne, a former US diplomat with the Carnegie Endowment for International Peace, wrote in the Washington Post: “The United States has a long record of blindly supporting whoever happens to hold the reins of power in Cairo. It has ignored their failings and looked the other way while they drove Egypt further into an economic and political ditch.”

“It’s time to get off autopilot,” Kagan and Dunne, who co-chair the bipartisan Working Group on Egypt, continued. “President Trump should ask some hard questions about what the United States has been getting for the $77 billion it has already spent. He might press Sisi to change his counterterrorism tactics to make them more effective and less repressive. He might insist that Sisi release arrested Americans and stop trashing the United States in the no-longer-free media.”

Asked if Trump raised human rights concerns behind closed doors with Sisi on April 3, the White House declined to say, although press secretary Sean Spicer alluded to “candid” discussions that included areas of concern as well as cooperation.

“Human rights are always an issue of concern to the United States, and they’re first and foremost in our discussions,” a senior administration official, speaking not for attribution, said in a White House background briefing March 31. “Our approach is to handle these types of sensitive issues in a private, more discreet way. And we believe it’s the most effective way to advance those issues to a favorable outcome.”