On a charm offensive to Washington, a group of influential Egyptians defended the ouster of Mohammed Morsi but got pushback on Egypt’s human rights record and decision to declare the Muslim Brotherhood a terrorist group. 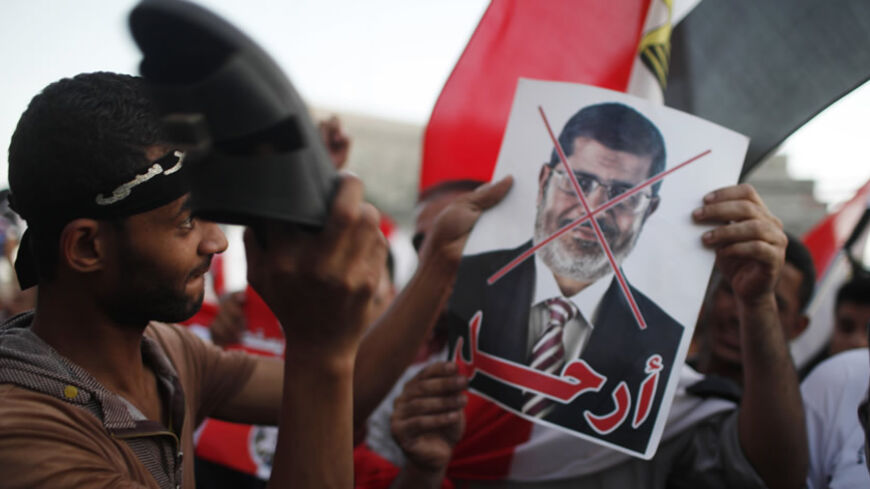 An anti-Morsi protester uses his sandal to beat a crossed-out picture of President Mohammed Morsi during an anti-Morsi and anti-Muslim Brotherhood protest in Tahrir Square in Cairo, June 28, 2013. - REUTERSAsmaa Waguih

The conversation at a Virginia hotel not far from Washington’s Reagan National Airport quickly grew heated as a group of influential Egyptians sought to convince a dozen Americans that the removal of elected president Mohammed Morsi in 2013 and his replacement by Field Marshal Gen. Abdel Fattah al-Sisi was a plus for Egypt’s political evolution and US interests.

Some members of the Egyptian delegation — invited to Washington by Hands Along the Nile Development Services, a group that promotes people-to-people ties with Egypt, and several US faith-based organizations — accused American think tank staff and human rights advocates of having a double standard for labeling the overthrow of Ukraine’s elected president this year as a “revolution” but Morsi’s ouster a “coup.

Riham el-Sahly, a television presenter on El Mehwar satellite channel, noted that Morsi had violated the constitution by claiming dictatorial powers in November 2012 and acquiesced in the brutal beating of demonstrators in front of the presidential palace. Crime rose during Morsi’s tenure and Egyptians were afraid to walk the streets or send their kids to school, she told Al-Monitor.

“He turned people against him,” she said.

The Americans, in turn, criticized Egypt for criminalizing the Muslim Brotherhood, killing more than a thousand people and detaining thousands more, including journalists and secular liberals, in the aftermath of Morsi’s ouster.

It isn’t enough just to “say how bad Morsi was,” Nicholas Veliotes, a former US ambassador to Egypt, told the group.

Jim Zogby, president of the Arab American Institute, said that while the Barack Obama administration’s handling of Egypt’s tumultuous events since 2011 had been characterized by “meandering and confusion … I don’t think Egypt has handled itself well in the last couple of years. To the degree we can be self-critical, Egypt can be self-critical as well.”

The debate on Oct. 21 kicked off a week of encounters for the Egyptians, which included two former ambassadors, several prominent journalists, Coptic and other Christian leaders and a representative of the Ministry of Endowments. Their charm offensive was partly aimed at overcoming strains in US-Egyptian ties before a major economic conference in Sharm el-Sheikh in February, when Egypt hopes to attract significant foreign investment.

The delegation met with Assistant Secretary of State Anne Patterson — a former US ambassador to Egypt — and other State Department officials, Director of the White House Office of Faith-based and Neighborhood Partnerships Melissa Rogers and the staffs of Sens. Barbara Boxer, D-Calif., and Lindsey Graham, R-S.C., and of Rep. Chris Van Hollen, D-Md. They also saw prominent Egypt experts at the US Institute of Peace and the Carnegie Endowment for International Peace.

By the end of the week, members of the group said they were satisfied that their views had been heard and that they were taking some messages back home as well.

Andrea Zaki, general director of the Coptic Evangelical Organization for Social Services, told Al-Monitor that the Egyptians conveyed their support for Sisi, who, after ruling as head of a military council that replaced Morsi, was elected president in May with a large percentage of votes, although a smaller turnout than in the previous presidential election.

Zaki said the delegation also expressed their view that while “we know we are moving toward a strong state, a strong state needs civil society and political opposition.” The third message, he said, was that Egypt wants US support in the fight against terrorism.

US officials and analysts pushed back, Zaki said, on the issue of whether the Muslim Brotherhood should be considered a terrorist organization. He said the Americans told the Egyptians that their government had not provided “serious evidence” for designating the Brotherhood a terrorist group and that the Egyptians would take this message back to their media and officials.

The Obama administration has toned down its public criticism of Sisi, whom President Barack Obama met in September on the sidelines of the UN General Assembly. Washington has praised Cairo for mediating last summer’s Gaza war between Israel and Hamas and expressed sympathy for those fighting Islamic extremists, such as the Egyptian soldiers killed in the Sinai Peninsula on Oct. 24.

Viewing the region increasingly through a counterterrorism lens, the United States has also downgraded a signature democracy promotion program. But there are still some restrictions on US aid to Egypt and many analysts in Washington assert that Egypt cannot return to stability while repressing major components of its society. They also criticize an impending edict for civil society groups to register with the government, which has led many respected foreign-funded nonprofit organizations such as the Carter Center to close up shop just when observers are most needed to monitor upcoming parliamentary elections.

“What is important is what happened after” Morsi was overthrown, Michele Dunne, an Egypt expert at the Carnegie Endowment who met the Egyptians, told Al-Monitor. “If Sisi had reintroduced a democratic process and there hadn’t been these human rights abuses, I don’t think any of us would be on our high horses about the coup.”

Dunne said of the estimated 20,000 political prisoners in Egyptian jails, almost 2,000 are students and more than 100 prisoners, including dual national Mohamed Soltan, are on hunger strike. The US government has asked that Soltan, whose condition is very poor, be released on bail but the Egyptian government has refused, Dunne said. “It is very difficult to justify normalizing the relationship” while such a situation continues, she said.

Sayyid Syeed, national director of the Islamic Society of North America, who participated in much of the week’s dialogue including a session on Muslim-Christian relations, told Al-Monitor he also encouraged the Egyptians to embrace political and religious pluralism. “The Egyptians should understand that no government can deliver peace, prosperity and law and order that does not involve all sections of society,” he said.

Delegation member Mahmoud Karem, a former ambassador to Belgium, Japan and NATO, told the Americans that the US media and researchers “are not receiving the true sentiments and pulse from Egyptian streets.” Karem, who also heads the Egyptian National Council for Human Rights, a government-approved body, urged resumption of a formal strategic dialogue between Egypt’s Ministry of Foreign Affairs and the US State Department.

Karem told Al-Monitor that Americans could help promote reconciliation in Egypt by telling the leaders of the Muslim Brotherhood that “you have to renounce violence.” If they do, Karem said, “That will augur well within Egyptian society.”

Another plea was for Americans to stop acting as though they knew better what was in the interests of a country with a recorded history going back 7,000 years.

“Don’t deal with us like a teacher with a pupil,” said Nashwa el-Houfi, a columnist for the daily newspaper Al Watan. “No one has the whole truth. You have part and I have part.”