At the eighth annual Beirut Art Fair, contemporary artists were given free rein to create works that explore sensitive topics such as Arab identity, politics and conflict. 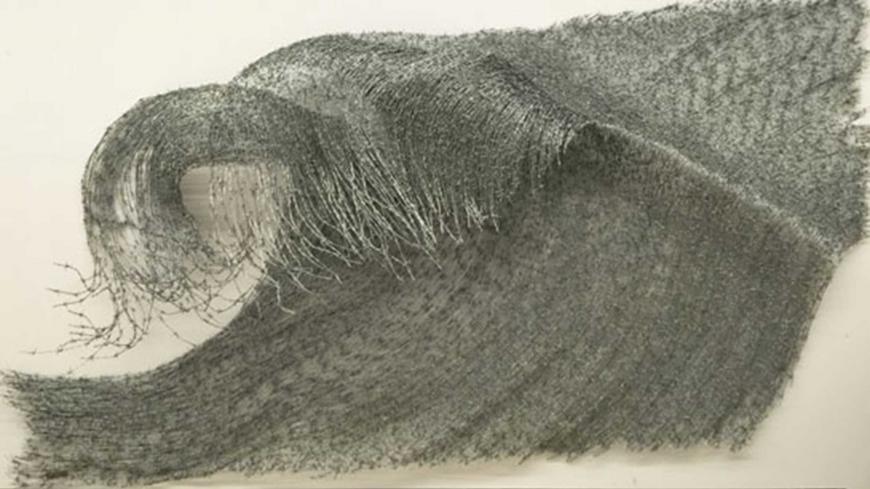 Palestinian artist Abdulrahman Katanani's "Wave," constructed from wire, is one of the works displayed in the Beirut Art Fair and seen here in an undated photo. - Rose Issa/BAF

Lebanese author Khalil Gibran’s masterpiece “The Prophet” and Arabic protest art lie at the heart of the Beirut Art Fair (BAF), an international exhibition that was held for the eighth time Sept. 21-24.  For the first time, there is also a parallel event, the Beirut Design Fair (BDF).

Beirut has always been seen as one of the capitals of art and design in the Middle East as well as the meeting place of curators, artists, culture operators and art fans from all over the world. One of the pillars of the art scene is BAF founder Laure d’Hauteville. The number of local, regional and international galleries and artists who join the fair increases every year; this year there were 51 galleries from 23 countries.

The first edition of the BDF brought together 44 Lebanese designers, from young and unknown to globally renowned. The co-founder and director of BDF, Guillaume Tasle d’Heliand, told Al-Monitor that he wants this first edition to “reassure the unique representation of Beirut as an international platform for design.”

“Beirut is already very important, but not everyone is aware of it,” he said. “Events like the Beirut Design Week have a local and regional audience, and the role of fairs is to take it to the next level, which is creating an international platform.” He said that, unlike many fairs around the world, there was no theme given to the artists. “It would frame the artists, and we want them to be free to create,” BDF co-founder Hala Moubarak said to Al-Monitor.

There were several focal points at the BAF. The first was Arab national identity through the exhibition “Ourouba, The Eye of Lebanon,” curated by Lebanese-Iranian author and curator Rose Issa and featuring loans from private and public collections of Lebanon. Considered to be the main exhibition of BAF 2017, it explored the notion of “Arabicity” through 62 installations, videos, paintings, photographs, sculptures and calligraphy by 39 artists.

“I wanted for a long time to do this subject, but the country wasn’t ready yet,” d’Hauteville told Al-Monitor. “It’s also an exhibition that is not possible to do in the other countries of the region because it would be censored. Here, you have protest artists politically and socially involved in what’s going on the region. At the same time, Lebanon is a country where each family has a collector and an artist; people do know about art. For me, Beirut Art Fair is a kind of platform to understand, see and discover through an innovative approach of contemporary and modern art, which is very present in the region.”

Lebanon is certainly one of the only countries where you can have a portrait of former US President George W. Bush surrounded by shoes — a reference to an Iraqi hurling his shoe at Bush in 2008, or a picture of the commercialization of Mecca.

One of the artists exhibiting in “Ourouba, The Eye of Lebanon,” Abdulrahman Katanani, is a Palestinian refugee born in Lebanon. He presented a wave made of wires to illustrate the evolving idea of borders and how they are used to keep people out. “I always work for the cause of refugees,” Katanani told Al-Monitor. “People fleeing by sea — thinking they would have a better and safer life — are in fact swallowed by the sea. I used to have such a romantic representation of the sea, of the waves, but now it has become a border, blocking us from freedom. I think of it as a protest against all kinds of borders, physical and psychological.”

Rose Issa was contacted by d’Hauteville for this project, and the two of them together selected the work to exhibit. Their only criterion was that the work be made in the last decade. “It is better to have the pulse of the region,” Issa said. “It is also a good chance for people to see what artists create and collectors gather nowadays.”

The exhibition touched a very sensitive cord: the anger and preoccupations of all generations of artists taken in the tumult of social, economic and political changes in the region. “What we can feel out of all this work is the need to have an identity,” Issa added. “They have a lot to say, notably their disappointment of the world we live in. You can see annihilated cities and history, very abrupt critics of despotism, of religion as a weapon of war. Through them, we see where we are in the region and it speaks to people. The audience really admires the artists’ bravery and determination.”

The other main focus of the BAF is on Khalil Gibran’s “The Prophet,” the most widely read Arabic book, translated into 50 languages and with dozens of millions of copies sold worldwide. This exhibition juxtaposes for the first time the illustrations and drawings made by Gibran for the first English edition of “The Prophet” with those created for the recent edition by Rachid Koraichi, an Algerian engraver and illustrator. Koraichi presented 49 drawings to reinterpret Gibran’s message in Arabic and Sufi calligraphy.

“It came to me in July 2016,” Koraichi told Al-Monitor. “There was the attack in Nice, the killing of Priest [Jacques] Hamel in Normandy and I was undergoing surgery at a personal level. A very bad month. I had read 'The Prophet' as a child during Algeria’s war, and I re-read it at that time. It struck me: How can a man talk about peace, respect and humanity when we are in the middle of a volcano? And why don’t men love peace? Why can’t they accept the other? We already have sickness and death as limits to our lives; why would you want to cause more pain or death to people?”

Working on the text was therapeutic for the artist, but he considers it a gift from both Gibran and him to the people. “Today more than ever, we need this voice of peace and especially love," Koraichi said.