The Palestinian Zawyeh Gallery has opened a second location in Dubai. 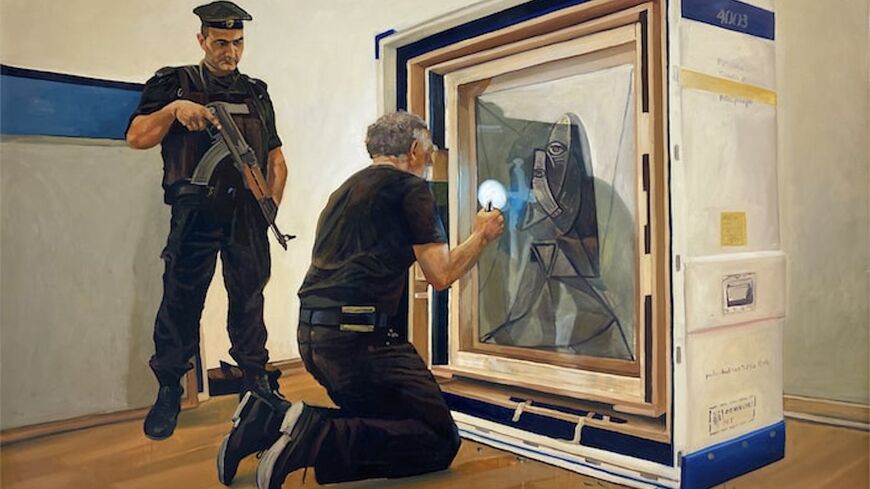 Dubai is widely acknowledged as the art market hub of the Middle East. An increasing number of galleries are relocating to the UAE to expose their artists to international viewers and collectors. One of them is the Palestinian Zawyeh Gallery founded in 2013 in Ramallah.

The gallery promotes emerging and established artists from Palestine and the diaspora through a varied exhibition program and participation in global fairs and art projects. In March 2020, right at the beginning of the pandemic, its owners decided to make a bold move to expand their reach in opening a second location in Dubai's Alserkal Avenue. In this Dubai arts and culture district, a cluster of contemporary art galleries are joined by music, food, performing arts and homegrown creative entrepreneurs.

“In Ramallah and the West Bank in general, there is a very limited number of art collectors who collect regularly,” Ziad Anani, director of Zawyeh Gallery, told Al-Monitor. “We work hard to create awareness around collecting art and building collections from scratch.”

Anani first visited the UAE for the art fair Art Dubai in 2016. “I was amazed by the art scene here,” Anani recalled. “Our participation allowed us to meet many art collectors, curators, artists and art enthusiasts. We made many contacts and good sales, which excited me to plan our next Art Dubai exhibition.”

During this first stay, he had also the chance to visit Alserkal Avenue, already a vibrant hub for established art galleries. He said, “I was impressed by the local creative community, and I wished to be part of this beautiful group.”

The following year, once again as a participant in Art Dubai, sales were even better. Zawyeh presented large paintings by young Ramallah-based artist Rana Samara. The booth sold seven out of nine pieces, further encouraging Anani to explore opportunities in Dubai.

In November 2019, after another edition of Abu Dhabi Art, “Alserkal accepted our proposal,” said Anani. “We had a pop-up exhibition in Warehouse #44 before moving to our permanent gallery space (Unit 27), which we are currently operating from.”

“I think within the region it’s very important to be in Dubai, as it plays an important role by being a safe and accessible place where artists from the region can be seen and can engage with a larger and diverse audience,” said Sunny Rahbar from The Third Line, a gallery operating from Dubai since 2005.

Rahbar, who has been a gallerist for more than 15 years, noted, “Dubai now also has an active cultural scene all year with Art Dubai, and many amazing galleries and other spaces programming shows/talks/film screenings and more. It’s an active and dynamic scene, and one that continues to grow.”

She remembers Zawyeh Gallery taking part in the Alserkal Avenue gallery cluster as an important step in showcasing talent from Palestine and beyond: “The more galleries we have here the stronger the art community will be here,” she said. “It's also a way for audiences to learn more about what is happening in Palestine and their program will allow us here to engage more deeply.”

Anani explained that the challenges of running an art space from Palestine are largely due to restrictions on travel: “We work with several artists based in the West Bank, Jerusalem, Gaza and the 1948 territories, and it is always challenging to bring their works to the gallery. Many artists cannot even physically make it to their shows due to these restrictions.”

Shipping artwork from Ramallah to other countries also poses challenges. “We face delays all the time from the Israelis for security reasons. So when we ship works, we expect delays, which affects our relationship with collectors who live abroad.” Anani finds this aspect of the business smoother and more manageable in Dubai. While the costs are much higher than in Ramallah, the purchasing power in the UAE is different and many collectors have shown consistent interest over the years in Zawyeh Gallery’s exhibitions.

Despite these differences, the Ramallah and Dubai spaces share an approach to curating and presenting the exhibitions, he said. “In both our spaces, we handle exhibitions the same. We work with curators and art writers who contribute fantastic work to our shows and work closely with our artists. So I can say that both spaces are on the same level when it comes to curation.”

Zawyeh stands out from other UAE galleries, which typically avoids overtly political works. From its inception Zawyeh has exhibited bold and direct art. “Most of the artists that we work with, either established or emerging, create mostly political work,” said Anani.

A case in point is the recent show “Metaphor” (Sept. 22-Nov. 6, 2021), featuring Palestinian artist Saher Nassar. In his first solo show, the artist experimented with ideas and media. “When I started working on the show, the concept of authority was feeding my ideas. I thought of authority of all types, from the social and political meaning of the word to authority on the self," said Nassar. “Self-authority I found to be particularly interesting for its inward influence based on one's own developed ideas or outwardly based on the supernatural.”

The title of the show comes from the artist’s research into the influence of metaphors and how they can be used as tools to dominate or influence people and nations. He reflects on the intermingling of capitalism and politics, which for him represent rigorous and contrasting pictures of authority.

In the work “Smoking Kills,” in which a pack of cigarettes is superimposed on black-and-white pictures of soldier in action. The artist explained that he wanted to discuss the exercise of political control by authorities and how much people in power are able to tolerate social demand for change.

In the series “Network,” which features blood displayed in microscope slides, he looks at how modern capitalists create social subsystems to control society: “Think of modern online networks, for example, and how they collect information on everybody and … offer them customized offerings or products,” he said. “I’m trying here to shake the viewer's awareness of how authority can take different shapes, by taking advantage of metaphor as an effective visual aid.”

Having exhibited previously in group shows in the UAE, Nassar is aware of the visibility and connectivity that a show in Dubai can provide. “Here you find multiple gatherings of galleries, both local and international, and the art scene in the UAE is getting richer year after year,” he said. “With my first solo show here I'm looking forward to getting my work seen on a wide scale, spoken of and discussed, which will surely inspire my future works.”

According to Anani, the UAE art scene is very sympathetic with the Palestinians and deeply interested in learning about their experience through the arts. He said, “Visitors to our Dubai space are impressed by theworks and concepts they see. Palestinian artists live under occupation and their work is very political. I would say that many people are discovering the many issues related to life under occupation through the art we exhibit.”

The director noted that in Dubai, a large number of Palestinians come to the gallery as a way to follow the art scene in Ramallah and see artwork from their countrymen.

Anani plans to expand the collection to different forms of art and support more young and emerging artists. Because of its positive experience in Dubai, Zawyeh Gallery many also open additional branches. This goal may sound counterintuitive in today’s pandemic times, when the virtual world is playing an increasingly important role.

However, Anani is still a big believer in the value of a physical space. “Working online and exhibiting virtually are very important because it allows us to reach a bigger audience from other countries. However, in my opinion, without a physical gallery space, the gallery doesn’t exist,” he said. “Artists, curators, collectors and art enthusiasts always want to see the physical works and interact with the pieces. In addition, we work with several artists whose work involves a variety of mediums and materials. I cannot imagine these works with their unique texture and detail without a physical display.”