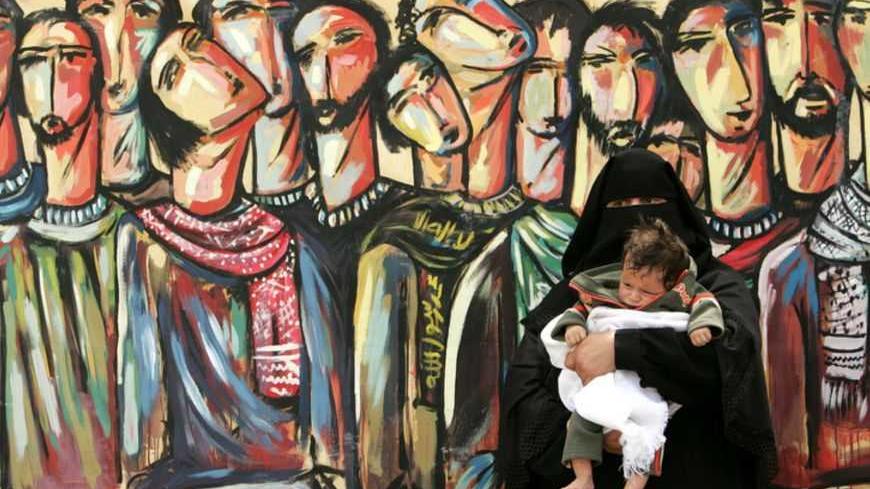 A Palestinian woman holding an infant stands before a Gaza artist's mural at a protest calling for the release of Palestinian prisoners from Israeli jails, in Gaza, April 16, 2007. - REUTERS/Mohammed Salem

Located just a couple hundred of meters from the sea on Omar al-Mukhtar Street is Gaza’s first art gallery, a nondescript door that is nestled between minimarkets.

Gallery Iltiqa was established in October 2009. One of the founders, artist Raed Essa, said the name came from the frequent gatherings of artists in Gaza.

“The artists involved in Iltiqa have been meeting on a regular basis since 2002,” Essa explained. “That’s where the name ‘Iltiqa’ came from, which means ‘meeting.’ We’re seven people, and we decided to do something about the lack of space or workroom available for artists.”

The Gallery’s front room features paintings from local artists’ previous works, such as Mohammad al-Hawajri’s exhibition “Cactus Borders” in addition to Essa’s current work-in-progress, which are a number of paintings presenting the “Resistance Fighter” or in Arabic, “Al-Muqawim.”

Born in al-Bureij refugee camp in 1975, Essa began drawing at a young age, but never thought of art as a profession. He took one art course when he was in school, and went on to study computer science at the Islamic University. He worked at the Red Crescent society for seven years, from 2000-07, teaching children how to draw, before receiving a grant from a Japanese organization to work on his first exhibition. Since then, Essa has had solo exhibitions and travelled to Switzerland, France, Lebanon, Australia, and Jordan, and describes his style as expressive art.

The first collective exhibition at the French Cultural Center in Gaza in 2002 by the same group of friends became the prelude to the idea of establishing Gallery Iltiqa seven years later. Since then, the artists who include Dina Matar, Raouf Ajouri and Mohammed al-Dhabus, have continued to work with a number of local civil and international organizations either collectively or individually, mostly without funding.

“There are some organizations that donate money to us for the essentials,” Essa said, “such as ensuring the rent of the gallery every month. There are currently three people who work full time at the gallery without receiving salaries — myself included — because we recognize that the gallery is a space to practice our art.”

The gallery is not used solely for showcasing the artists’ paintings. Cultural activities and workshops are given every month or two, which are now directed at young adults instead of children. The Iltiqa artists encourage university students or graduates to develop their hobby of painting or drawing by giving them training courses and most importantly, a space to practice their skills.

Iltiqa has also collaborated with the Palestine Center for Human Rights whose location is only a few doors away from the gallery, on an exhibition called Visual Stories. The show relayed 23 artists’ experience of the 2008-09 Israeli offensive on Gaza which claimed the lives of 1,400 Palestinians through paintings and sketches.

“The situation in Gaza doesn’t allow for art to be showcased outside of the gallery,” Essa admitted. “First of all it’s most likely that you need to obtain a license from the government, and secondly the society would look at it in a deprecating way. The people here love classical art, like a painting of the sea and the sun and palm trees, but they don’t understand that there are different forms of art. That’s slowly changing. … Whenever we open a new exhibition at the gallery our neighbors come in to have a look and have a grasp that art is not just about a painting of the sea.”

Essa conceded that the gallery doesn’t face any problems with the Hamas government, who turned a blind eye to the gallery.

“The government doesn’t try to hinder our work nor does it support us,” he said. “We believe that the work we do is important because it creates an outlet for the frustrations we live through on a daily basis, and it should be the government’s job to provide us with provision and support our initiative.”

The French Cultural Center has proved to be the gallery’s strongest supporter. In addition to coordinating art exhibitions to be displayed from Gaza to other parts of the world, the Center plays a vital role in raising donations to buy art supplies and materials and bring them from Jerusalem to Gaza via the Erez checkpoint. In Essa’s words, the artists mostly rely on foreigners bringing their materials as they come to Gaza.

The last time Essa visited the West Bank was ten years ago, yet communication with other Palestinian artists in the West Bank and ’48 territories is continuous. The only way they can meet is through exhibitions outside of Palestine, which is how Essa met Suliman Mansour, an artist from the West Bank who he heard so much about.

“Every artist from Gaza and the West Bank knows about Iltiqa Gallery, but regrettably there isn’t much coordination between us and the cultural committees in the West Bank,” Essa said.

However, he cited one rare success story of managing to showcase an exhibition belonging to the Syrian artist Marwan Qassab Bachi, who Essa considers is the biggest influence on his art and life, from Birzeit to Gaza.

“I got in contact with Vera Tamari, the curator of the Birzeit University Ethnographic and Art Museum, and succeeded in transferring Marwan Qassab Bachi’s paintings from there to here,” Essa smiled. “That was considered to be a huge achievement, getting a renowned artist’s paintings to Gaza.”