Women dominate the graphic design scene in Lebanon, but their work is more valued abroad than at home. 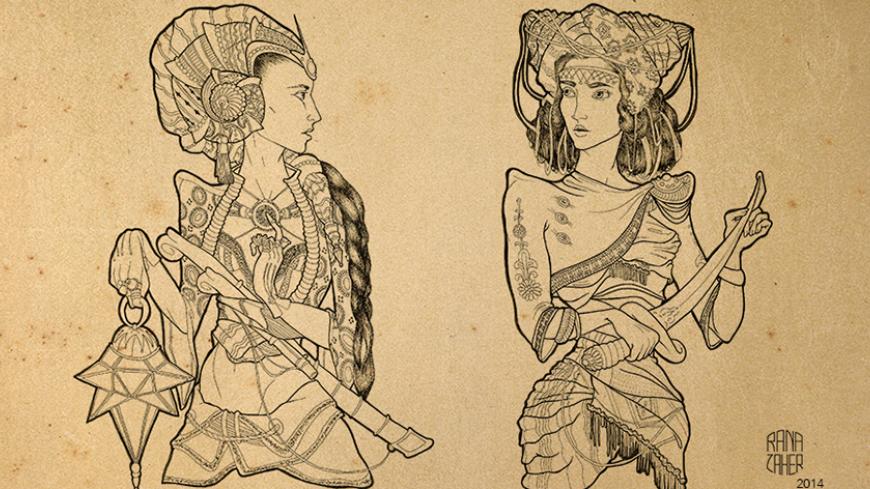 "Assassins," by Rana Zaher, one of the four graphic designers whose posters were displayed in the "Critical Mass: Women in Graphic Design" exhibition during the Beirut Design Week on May 19-26. - Rana Zaher - Instagram photo

Powerful female figures of cinema and television, from cruel Cersei Lannister in "Game of Thrones" to unyielding Ellen Ripley in "Alien," take striking poses in the posters by Samar Haddad, one of the new generation of women graphic designers in Lebanon.

“Sadly, women still must fight for their place in a patriarchal society,” Haddad told Al-Monitor.

Haddad’s Space Vacation is one of the works in the exhibition "Critical Mass: Women in Graphic Design," which was held May 19-26 at Beirut Design Week (BDW) at KED, a refurbished factory built in the 1930s in Karantina. The exhibition also displayed the posters of three other Lebanese women graphic designers: Rana Zaher, Yasmine Darwiche and Stephy Ibrahim for Saturn In Motion.

The styles of the four designers were widely divergent. Haddad’s representations of powerful fictional women included characters from famous TV series or movies. Next to her, Ibrahim displayed posters of six different cities (Amsterdam, Berlin, Vienna, Rotterdam, Athens and Beirut) as seen by the artist. Beirut was also the focus of the vibrant colors mixed with photographs of Darwiche, depicting Beirut in striking, almost postcard images — a positive city far from the pollution, traffic and construction people see every day. Zaher’s posters marked a contrast with the rest, with one series of posters on Pink Floyd’s song titles and another series about the forgotten culture of the region, playing on archaeology, identity and graphic design.

The decision to reserve a whole corner of the second floor of the exhibition for posters made by Lebanese female visual artists was made by Doreen Toutikian, director of the MENA Design Research Center, the force behind the BDW. “Women are the majority in the graphic design scene in Lebanon,” Toutikian told Al-Monitor. And even though there are no statistics to prove her right, you can see it during events and exhibitions. “Even in graphic design classes in universities, the majority are women. But as a feminist, I don’t think they are given enough appreciation and respect for their hard work and talent.”

With very different styles, these four women managed to attract the audience’s attention. “This exhibition is an ode to all these young talented women who deserve to shine,” Toutikian told Al-Monitor. “These four artists here are very talented and unique in their styles, especially when it comes to illustration, which I believe is the hardest and most impressive part of graphic design.”

Toutikian maintains that graphic design creates an essence that is truly art, and yet clients sometimes undervalue it. “With such an exhibition, we are not only helping graphic designers to sell their own work instead of what is requested by clients. This guarantees more encouragement from others,” she said.

Zaher thinks women have more freedom than men when it comes to choosing graphic design as a major. “Parents are usually stricter when it comes to choosing a profession for men,” she told Al-Monitor. “In my class, men were quite rare actually. I am just happy to share my work with people — not as a woman but as an artist, because we are just as good as men at everything.”

Haddad favors BDW’s idea to reserve a corner for female graphic designers. “It is vital for an artist or anyone with talent to have [the] opportunity, space and outlet to showcase their work,” she told Al-Monitor, adding that women still must fight for these. “I think it's a solid step that Beirut Design Week is highlighting women in arts this year.”

Ibrahim told Al-Monitor that the focus on women in graphic design and women having their own studios started only five years ago. “Women are not heard, and their work is not well communicated,” Ibrahim said. “Interestingly, Lebanese female artists are more appreciated internationally than in their own country. I hope this exhibition and other events like this one will inspire other women in arts to do more and not be afraid of standing up.”

Darwiche thought it was “important to enlighten women’s work and success in general and not only for artists, so their voice and thoughts could be heard and shared.”

At last year's seventh edition of the Beirut Art Fair — a gathering of artists from all over the world — an exhibition focused on Lebanese female artists: “Lebanon Modern! Women artists in Lebanon 1945-1975.” Curated by the art fair’s cultural director Pascal Odille, the latter told The National that “the idea was to try to make people understand that it is not because one is a female artist that one doesn’t have that force of temperament, that energy and that avant-garde spirit because, for a long time, especially in the 1920s and 1930s, women’s artwork was seen as a hobby. It wasn’t. We have the proof.”

For Haddad, the "Critical Mass’" exhibition allowed Lebanese female graphic designers to spread a universal message. “I like to think of visual arts as a movement rather than an activity. I don't think it's limited to women. It is for those who appreciate endless possibilities through diverse mediums expanding to anyone who chooses to see the world differently,” she said.