Turkmen areas in Iraq have become a battleground between Arabs and Kurds to exert influence over them, while the Turkmens are concerned about the inclusion of these areas in the Kurdistan referendum on independence. 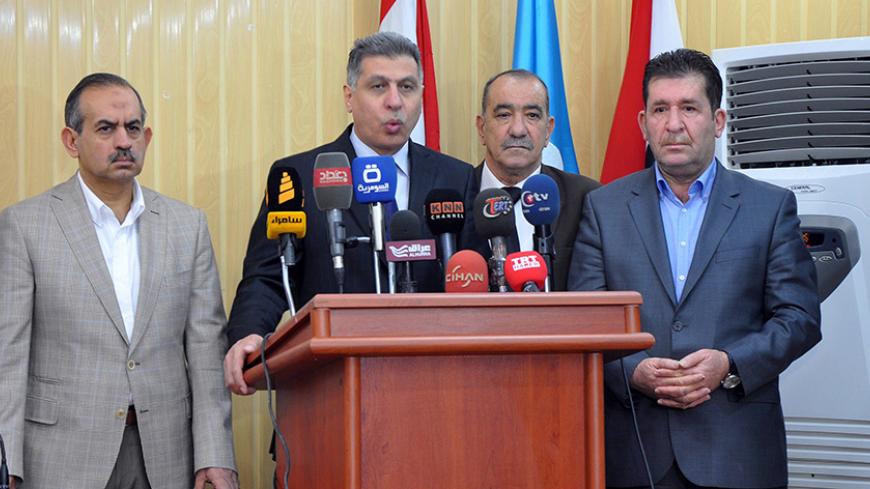 The Iraqi Turkmen Front, the largest political party representing the minority Turkmen ethnic group, has reiterated its objection to the Kurdistan referendum scheduled for Sept. 25. In a statement issued July 29, the front stressed that the fate of Kirkuk — a particularly disputed province that is set to be included in the referendum — "must be decided by the Iraqi parliament." In Kirkuk, Kurds account for 52% of the population, while Arabs, Turkmens and Christians combined account for 48%. The referendum also includes other areas of contention, including ones considered by the Turkmens as their own.

The Turkmen objection to the referendum goes in line with the position of the Iraqi government, which announced July 20 its rejection of the referendum. This raises the possibility of a war erupting in the region between the Iraqi security forces and the armed factions supporting them on the one hand and the peshmerga forces on the other. This would force Turkmens to take sides and would place their areas on the confrontation lines between the two parties.

Those areas, which have been disputed between Erbil and Baghdad since 2003, could be the spark that ignites a war between the Arabs and Kurds at any moment. On Nov. 16, 2016, Baghdad and Erbil mobilized their forces against the backdrop of a security dispute in those areas, namely in Kirkuk. This created the real possibility of armed conflict. The Turkmens, the third-largest ethnicity in Iraq after the Arabs and Kurds and whose presence in Iraq dates to the Ottoman occupation of the region, are well-aware of the repercussions of such a conflict and are concentrated in the provinces of Kirkuk, Salahuddin, Diyala and Ninevah, in Tal Afar and rural areas around Mosul, as well as in Erbil, Altun Kupri, Kifri, Qarah Tabbah, Khanaqin, Gazzrabat (Saadia) and Mandali.

Mehdi Saadoun, an activist in the Turkmen Rescue Foundation, told Al-Monitor, “Holding a referendum in these areas is to be expected following the defeat of the Islamic State [IS] in Iraq, as the Kurds seek to extend their control as much as possible in the disputed areas by definitively annexing them to Kurdistan while turning a blind eye to the fate of the Turkmens.”

He said, “The peshmerga forces have further sought to dominate the areas under the pretext of preparing them and securing them for a successful ballot at a time when the Popular Mobilization Units threatened to intervene, thus throwing the Turkmens into a quagmire of a possible bloody war between the two sides.”

Saadoun added, “Kurdish groups, backed by Kurdish parties and forces, are provoking the Turkmens by carrying out assassinations, killings and looting operations in broad daylight and with the knowledge of the local government. Since 2003, Kurdish forces have changed the demographics of the Turkmen regions and imposed a fait accompli.”

Saadoun said he believes that “because of the repercussions of the referendum, a political conflict is rapidly developing into a military clash between the Kurdish political forces and parties on the one hand and the Arab parties on the other, as each party seeks to impose its presence in those areas.”

Jassem Mohammed Jaafar, a Turkmen member of the Iraqi parliament, told Al-Monitor, “The persecutions and armed actions are affecting the feeling of coexistence with the Kurds in Kirkuk and other common areas.”

He added, “We cannot see these operations unfold without doing anything to help our areas, which have become dependent on the relations between Baghdad and Erbil."

Asked about the reaction of the Turkmens, whose population is estimated at 3.5 million (there are no official statistics), Jaafar said, “The Turkmens will not be a difficult card in the conflict because of their limited number and practically nonexistent military potential — compared with the Arabs and Kurds. Add to this their displacement at the hands of the Kurds, which led to their dispersion in areas inside and outside Iraq, in Turkey and Iran.”

“Since 2003, Kurds have sought to displace Turkmens from Kirkuk and other areas and replace them with Kurds in a bid to bring about a demographic change,” he added.

Jaafar threatened to “internationalize the issue of the Turkmens, should their demands continue to be ignored and should the government continue to remain silent about their persecution at the hands of the Kurds.”

However, despite this feeling of weakness, the Turkmens and their leaders are still hanging in there. On July 29, Hassan Tauran, the deputy head of the Iraqi Turkmen Front, told media outlets that the regional tours by the front aim to convey a message to the world that Turkmens’ worries in the post-IS stage are caused by the Kurdish referendum and the inclusion of Turkmen areas within the territory Kurds seek to establish.

Meanwhile, Turkmen political forums have been addressing the many massacres the Turkmens have been subjected to, including one in Kirkuk in 1959 and one in Altun Kupri in 1991 by Saddam Hussein's regime. Turkmens were also subjected to an Arabization campaign during the Baath regime and a policy of “nationalism correction,” which forced many of them to change their national affiliation and become Arabs. On May 9, Human Rights Watch accused the Kurdish security forces in the city of Kirkuk of forcing Turkmens out of the city.

Member of parliament Mohamed Othman Khalidi told Al-Monitor, “The concerns of minorities and different communities are mainly driven by the injustice that has been inflicted upon them under Saddam's regime and the successive governments after 2003, which made them suspicious of the positions of the other party.”

He added, “This led all the parties to take extreme positions out of fear of undergoing the same injustice,” and pointed out that “dialogue, harmony and a proper and fair application of the constitution is the solution to guarantee the rights and demands of all communities.”

Article 143 of the Iraqi Constitution considers Kirkuk an area outside the borders of Kurdistan, meaning that Kurds are not entitled to include it in the referendum.

Turkmens have been seeking to claim their right to government positions and to teach their children in their mother tongue. They also have been demanding their administrative rights and have been calling for an end to the Arabization campaign by the Arabs and Kurdization attempts by the Kurds. At the moment, their main concern is the Kurdistan referendum.