Turkey warns of migrant surge in spat with EU

The Turkey-EU migrant deal is largely sticking because both sides have benefited from it, but Ankara is working to leverage the plight of refugees in exchange for cash and visas. 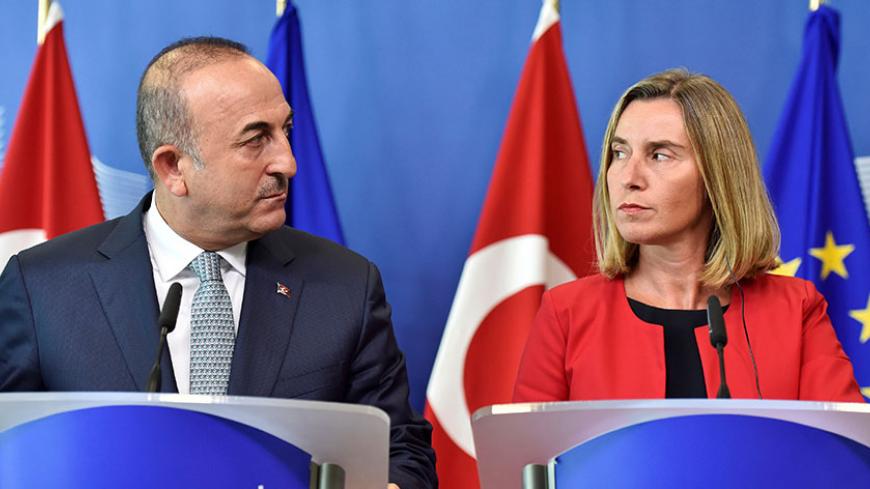 Turkey has renewed a warning to the European Union about a new surge of migrants as its impatience grows over foot-dragging on visa-free travel, exposing the divide between Ankara and the bloc it says it still wants to join.

Foreign Minister Mevlut Cavusoglu also complained in an interview published by the Turkiye newspaper on Aug. 11 that the EU’s refusal to open new chapters in membership talks was “entirely political” and Western allies had failed to sufficiently support President Recep Tayyip Erdogan after he faced down a military coup last year.

Under a 6 billion euro deal agreed last year, EU money has been coming in, giving Turkey’s sluggish economy a boost and helping it manage the world’s largest population of refugees.

But Brussels has not delivered on pledges to allow Turks to travel to most EU countries without a visa and to accelerate membership talks. Instead, it has heaped criticism on Turkey for human rights abuses in the crackdown that followed the failed coup and persisted through a constitutional referendum in April that gave Erdogan sweeping new powers.

“Were our law enforcement to quit all of its efforts tomorrow, the Aegean Sea would become a route for irregular migration and a serious crisis would emerge. We expect the EU to keep this in mind and immediately fulfill its obligations under the agreement,” Cavusoglu told the newspaper.

He stopped short of saying Turkey would tear up the deal, and it is not the first time Turkey has threatened to set off a humanitarian crisis if the EU fails to meet its demands. Erdogan told the EU in March it could “forget about” Ankara’s promise to readmit asylum seekers.

But it clashes with a Turkish push in recent weeks to repair frayed ties with Europe, especially Germany, that have undermined Ankara’s decadeslong quest to become an EU member.

Leveraging the plight of refugees in exchange for cash and visas dents the credit Turkey is rightly due for sheltering more than 3 million people fleeing the six-year war in Syria and even offering them a path to citizenship.

Cavusoglu’s rhetoric aims to stir memories of 2015, the peak of the migration crisis, when a record 1.05 million people reached Europe, nearly 90% of them from Turkey across the Aegean, where 279 people died trying, according to the International Organization for Migration.

Images of lifeless bodies washing up on Greek and Turkish beaches and hundreds of thousands of people trudging on foot in freezing weather through the Balkans still haunt Europeans.

Turkey has proven it can control the flow. In the first six months of this year, 12,191 people used the eastern route to reach Greece from Turkey, and 45 people died on the way.

“A year and a half ago, EU leaders were all lining up to deal with the refugee crisis. We ended this drama in the Aegean Sea. It’s as though they have forgotten our efforts,” Cavusoglu said.

Just two weeks ago, the EU said it had “no concerns” about the migration agreement and that it was working well.

And relations with Germany show glimmers of a recovery. Last week, NATO brokered a deal to allow German lawmakers to visit their troops at a base in central Turkey after Germany threatened Turkey with economic sanctions and said the country was not safe for its businesses and tourists. Berlin is also outraged by the detention of two German journalists and a rights activist in the post-coup clampdown that has jailed 50,000 people.

For his part, Erdogan said Aug. 12 that German criticism was motivated by electioneering and relations would normalize after Germany’s Sept. 24 Bundestag poll.

Despite Cavusoglu’s salvo, the migrant deal is largely sticking because both sides have benefited from it, experts say. But Ankara may have less sway in other matters. It has lobbied for an expansion of a 20-year-old Customs Union to include more Turkish exports to its biggest trading partner.