Turkey might seek more than mere reconstruction in northern Syria 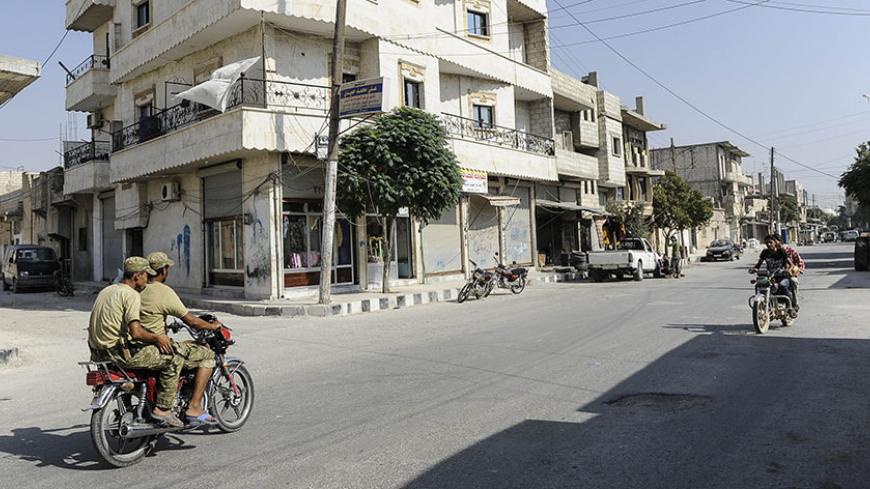 Turkey has been working to rebuild the 772-square-mile (2,000-square-kilometer) Jarablus/al-Rai/al-Bab triangle in northern Syria, dedicating funds for post-conflict reconstruction and humanitarian aid. The Islamic State (IS) was driven out of the area's 250 settlements during Operation Euphrates Shield (August 2016-March 2017).

Since March, about 70,000 Syrians have returned to the triangle from Turkey. About 100,000 more are expected to be repatriated by the end of 2017. About 45,000 of the returnees have settled in Jarablus, where Turkey’s ambitious post-conflict reconstruction efforts fall into two groups: physical construction work and society-building. Ankara has decided to make Jarablus a center of attraction in the post-IS setting and use it as a model for the rest of the region. That's why Turkey assigned experienced administrators, police chiefs and muftis (religious officials) as consultants to the Syrian decision-makers of Jarablus.

The most notable activity is the ongoing construction of more than 100 buildings in the town center, including hospitals, orphanages, police stations and children’s parks. Men working in these projects earn enough money to sustain their families. With the equipment and supplies obtained from Turkey, the town now has electricity and running water, though problems persist with sewage infrastructure. Most of the roads in the town and around it have been repaired and paved. Some 80 mosques in the triangle are under construction, 10 of them in Jarablus.

Obviously, the security situation in Jarablus is much better than five or six months ago, but there are still problems. In May, armed clashes broke out between the Free Syrian Army (FSA) Sultan Murad Brigade and Faylaq al-Sham militants over sharing smuggling revenues.

Following these clashes, a local police force trained in Turkey took over security duties, supported by Turkish gendarmerie special operations teams. As of July, carrying weapons in the town center was prohibited. At the end of July, entire security functions were handed over to the Free Syrian Police Force. Militants of pro-Turkey armed groups such as Al-Hamza Brigade and Sultan Murad Brigade are recruited after they are demobilized and trained in keeping order, combating terrorism and traffic management.

Currently, female applicants are being screened for a new unit to be made up entirely of women to serve in the Jarablus police force, entirely outfitted with armed vehicles, weapons, equipment and uniforms supplied by Turkey.

The latest major delivery to Jarablus in July was equipment and supplies for the fire brigade.

With the health services it has been providing, Turkey has made great strides in establishing friendly relations with the local residents. Doctors sent from Turkey are serving at the Jarablus hospital, and a mobile medical emergency service is already operating in the town center.

According to a local security source, in the areas where the Turkish army supports FSA groups, oil exploration work has gained momentum. There is now a plan to build a refinery for high-quality oil and diesel production in the triangle.

Meanwhile, work is progressing to construct permanent, battalion-capacity military bases for the Turkish army in the Aqil Mountain area of al-Bab, as well as south of Jarablus and at Azaz. The goal is to train local military groups at these bases and consolidate them into a standing military force.

Another field receiving sizable assistance from Turkey is education. Turkish Ministry of Education officials who studied the needs of the triangle somehow decided that the model of religious high schools of Turkey was the best solution for the people and children of Jarablus. These officials advised their ministry to mobilize all of its facilities to appoint qualified personnel, find buildings, prepare hostels and provide equipment, supplies, housing, food and books for religious education in the region.

It's been noted that the Education Ministry maintains close relations with Turkey’s prominent religious NGOs that are active in Jarablus.

The Jarablus project has received its share of criticism.

“Many foreign and Turkish NGOs are waiting for permission from Turkish authorities to provide aid to Jarablus," said an NGO official working in Gaziantep who didn't want to be identified. "Foreign NGOs especially are not given permits to work in the region. They are not openly turned down but are simply kept waiting indefinitely. Also, only the pro-government media and official Anatolian Agency are allowed access to the region. We know what they are going to write. This cloaks Turkey’s humanitarian assistance efforts in unnecessary secrecy and raises questions about its transparency.”

Another foreign NGO worker who didn't want to be identified told Al-Monitor, “From a humanitarian perspective, Ankara seeks to exercise total control over the triangle for logical reasons such as security. [However,] the extensive use of [Turkey's] Gaziantep metropolitan municipality, Gaziantep province, etc., in the role of post-conflict stabilization is unusual.”

He added, “But I largely think that we do not know enough about what is happening on the ground, how the local people feel about the aid provided and whether there is any monitoring and supervision."

A UN official who coordinates aid activities in the area who also didn't want to be identified said, “The Red Crescent of Turkey and the governmental assistance body AFAD do amazing, great work. But the Syrian NGOs they work with don’t want to talk to us and to the media. This, unfortunately, clouds the transparency of Turkey’s humanitarian aid efforts.”

Also, despite all the efforts to improve security and law and order in the area, there is a perceptible increase in polygamy, child marriages, sexual harassment, smuggling and organized crime.

Yet reconstruction work at Jarablus still deserves high praise, especially compared with the situation under IS control. But there are two risky areas that could cast shadows on Ankara’s efforts.

The first is the ideological struggle between Hayat Tahrir al-Sham — the radical Salafi-jihadi organization that currently controls Idlib — and moderate groups in the triangle. Can Hayat Tahrir al-Sham hijack Ankara’s success story in Jarablus, or can Ankara-backed moderation in Jarablus tame the Salafi/jihadi sentiments still observed in the triangle?

A social media message by a pro-Hayat Tahrir al-Sham Turkish Salafi-jihadi said, “Life in Jarablus cannot be hidden. Under the guise of democracy and freedoms, adultery and immorality have peaked there. Jarablus is becoming a corrupted town distant from an Islamic environment.”

Clearly, extreme Salafi-jihadi groups inside the triangle are not happy with Turkey’s efforts.

The other risk involves Ankara's intent: What is its political goal in the triangle? Will Ankara one day hand over the area to the regime of Syrian President Bashar al-Assad? Given Ankara's disdain for Assad and the amount of money Turkey is investing in the reconstruction, that's unlikely. Perhaps Turkey's long-term aim is to impose its de facto influence on the region? These questions need to be answered before Turkey's approach can be seen as a whole.