Secretary of State Rex Tillerson committed the United States to fighting for religious liberty around the world with the release of the annual International Religious Freedom Report. 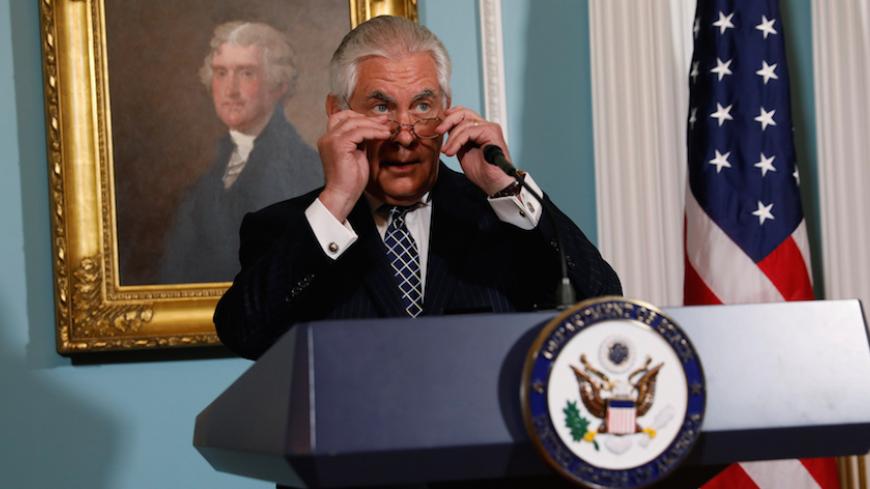 WASHINGTON — Secretary of State Rex Tillerson today committed the US government to fighting for religious freedom around the world, singling out the Islamic State (IS) and Iran, as well as US allies such as Saudi Arabia, Bahrain and Turkey, for their intolerance toward religious minorities.

The secretary's remarks accompanying the release of the State Department’s 2016 International Religious Freedom Report were particularly noteworthy amid reports that the Donald Trump administration wants to shift away from promoting democracy abroad. Tillerson adopted a much different tone in his opening remarks today, touting the defense of freedom abroad as an ethical and national security priority.

“The United States promotes religious freedom as a moral imperative,” he said. “As importantly, we promote religious freedom because countries that effectively safeguard this human right are more stable, economically vibrant and peaceful. The failure of governments to protect this right breeds instability, terrorism and violence.”

Tillerson’s remarks follow Trump’s nomination last month of Kansas Gov. Sam Brownback to serve as the next ambassador-at-large for international religious freedom. The remarks were a hit on Capitol Hill, where many lawmakers have vowed to oppose the administration’s proposed cuts to US foreign aid.

“I applaud Secretary Rex Tillerson's remarks on the release of today's State Department International Religious Freedom Report,” Senate Appropriations Committee member James Lankford, R-Okla., said in a statement. “It is vitally important that our top diplomat clearly and unequivocally proclaim that religious freedom is a core American value and a universal human right.”

Tillerson reserved much of his criticism for the crimes perpetrated by IS. He asserted that the group's mass murder, rape and enslavement of Yazidis met the legal definition of genocide, a conclusion the Barack Obama administration first reached in March 2016.

“[IS] is clearly responsible for genocide against Yazidis, Christians and Shia Muslims in areas it controls or has controlled,” Tillerson said. “[IS] is also responsible for crimes against humanity and ethnic cleansing directed at these same groups, and in some cases against Sunni Muslims, Kurds and other minorities.”

Under the 1998 International Religious Freedom Act, the State Department is required to report to Congress annually about the state of religious freedom in countries around the world. The report itself does not rank countries or have direct policy consequences, but provides data to help inform policymakers. Ninety days after the report’s release, the secretary of state is supposed to submit to Congress a list of countries deemed “of concern.”

“The purpose of the report is to give Congress and the executive branch data to inform judgments about foreign assistance, allocation of diplomatic resources and other issues, including adjudication of asylum and refugee requests,” Ambassador Michael Kozak, a senior adviser to the State Department’s Bureau of Democracy, Human Rights and Labor, told journalists in a telephone briefing today. “It is not designed to pass judgment or to rank other countries, but rather to create a fact-based review for use in US government decision-making.”

Tillerson, in his overview of the report, singled out Saudi Arabia for official intolerance of non-Sunni Muslims, and Bahrain for persecution of the country’s Shiite majority.

“We remain concerned about the state of religious freedom in Saudi Arabia,” Tillerson said. “The government does not recognize the right of non-Muslims to practice their religion in public, and applied criminal penalties, including prison sentences, lashings and fines, for apostasy, atheism, blasphemy and insulting the state’s interpretation of Islam. Of particular concern are attacks targeting Shia Muslims, and the continued pattern of social prejudice and discrimination against them."

“In Bahrain, the government continued to question, detain and arrest Shia clerics, community members and opposition politicians,” he added. “Bahrain must stop discriminating against the Shia communities.”

And in Turkey, Tillerson said, “authorities continued to limit the human rights of members of some religious minority groups, and some communities continue to experience protracted property disputes.” He added that “non-Sunni Muslims, such as Alevi Muslims, do not receive the same governmental protections as those enjoyed by recognized non-Muslim minorities.”

Tillerson also accused Iran of persecuting in particular its Baha’i minority. “Members of the Baha’i community are in prison today simply for abiding by their beliefs,” he said.

“There is a growing consensus on the need to act,” Kozak said. “The genocidal acts of [IS] awakened the international community to the threats facing religious minorities.”