Following a religious lecture by the head of the Shiite Endowment on the provisions of jihad against non-Muslims, Iraqi minorities called for the government to take decisive action against hate speech in the country. 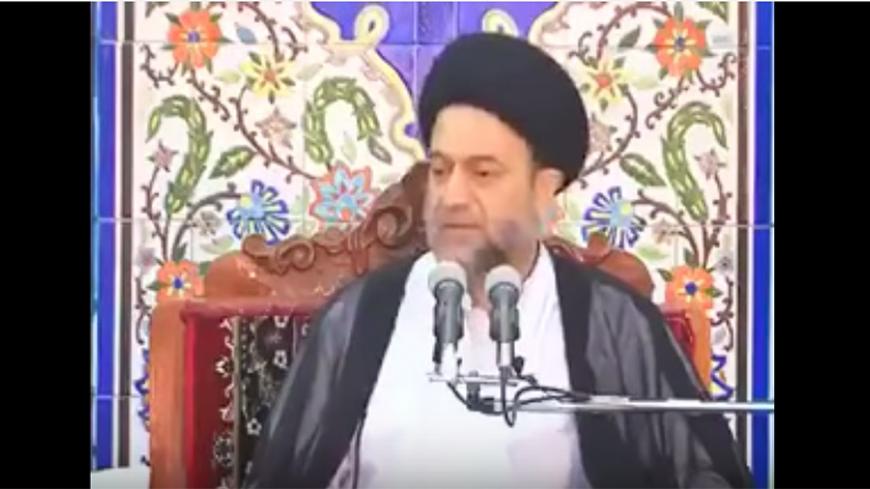 A still from leaked video footage shows head of the Shiite Endowment Alaa Abd al-Sahib al-Musawi making statements about non-Muslims that have provoked outcry. Video uploaded May 1, 2017. - YouTube/The way to the truth The way of Truth

In undated footage that leaked earlier this month, head of the Shiite Endowment Alaa Abd al-Sahib al-Musawi is heard saying that non-Muslims have three options: take up jihad alongside Muslims, convert to Islam, or agree to pay jizyah — a yearly tax historically levied by Islamic states on Christians and Jews. The video sparked outrage on social media.

Subsequently, a group of 180 Christian families filed a lawsuit against Musawi, accusing him of spreading hatred against the minorities in the country.

Patriarch Mar Louis Raphael I Sako, head of the Chaldean Catholic Church in Iraq, issued a statement on May 5 to contain the anger sparked by the leaked video and alert religious leaders of their historic responsibility in such critical times in the nation’s history. He urged the religious leaders to “adopt moderate and open-minded measures as well as ban hate and discriminatory speech.” The patriarch clarified that hate speech “does not serve Islam. Rather, it establishes walls among people, divides them, entrenches Islamophobia, dissolves the fabric of the nation, undermines peace, and violates freedom and human rights.”

In his statement, Patriarch Sako stressed the important role played by the state, arguing that the absence of its authority leads to a breakout of destructive hatred: "We hereby call upon the government to enforce the law and work on respecting the religion of every human being pursuant to the legislation of the graceful Quranic verse that says: 'So whoever wills, let him believe; and whoever wills, let him disbelieve.'”

As angry reactions emerged, parliamentarians called for reform to integrate the religious endowments in Iraq with a civil administration in order to achieve unity, taking fully into consideration that “the position is held by a secular figure, and whoever is proved to have incited religious dispute or sectarian strife in the country is dismissed,” according to the statement made May 12 by a representative from the parliamentarian Sadrist Al-Ahrar bloc.

Reactions to the leaked video unveiled some of the tension in Islamic-Christian relations as well as other religious minorities — tension that reached a critical stage after the Islamic State (IS) took over more areas of Iraq since June 2014, persecuted religious minorities and committed crimes against humanity, such as genocide in Sinjar as well as other areas in the governorate of Ninevah.

Ammar al-Hakim, head of the predominately Shiite National Alliance, invited leaders of Iraqi minorities in addition to Musawi for a meeting on May 17 to discuss and solve the issue. The meeting emphasized the necessity of stopping hate speech against all Iraqi groups.

In a conversation with Al-Monitor on how to confront the discourse of hatred, Patriarch Sako called for the establishment of a national council for religions or a national committee on religious dialogue through which united stands could be taken on the level of religious leadership “to avoid division and create a culture of dialogue of which we are in the direst need, especially in times as difficult as these, which are devastating the people of our nation.”

Concerning Musawi, his conversation with Al-Monitor revealed that the video was from a theological lecture, which is “practically far from the present,” as he was addressing the provisions of enslavement in Islam — which are “from the past and are no longer considered in the present.” Musawi added that leaking the video was supported by parties that stand against establishing pillars of Islamic-Christian coexistence, especially after several Christian, Yazidi and other minority areas were freed from IS in a stand that seemed united against the extremist organization. Consequently, and according to Musawi, there is a suspicious purpose behind hindering the rebuilding of trust between components of a post-IS Iraq.

Musawi emphasized the positive development in relations between Muslims and the rest of the religious components after the Iraqi Delegation for Religions Dialogue, which he heads, visited Pope Francis in Rome. Musawi added that he thanked the pope for hosting the meeting with the high-level Iraqi delegation, and he addressed the pope, saying, “We are entrusted with the message of God, and such obligation necessitates that we preserve and protect this entrustment.”

Meanwhile, the supreme Shiite cleric in Najaf, Grand Ayatollah Ali al-Sistani, issued a statement calling for respecting the sanctity of Iraqi blood as well as the cessation of mutual violence in all its forms. He emphasized that Christian or Mandaean citizens should not be harmed, stressing his past stands, which go in line with the traditional Shiite clergy in Najaf.

Furthermore, Joseph Sliwa, a Christian member of parliament with the Warka Democratic bloc, told Al-Monitor that Christians appreciate the stand of Sistani, who always wishes Christians well on the Christmas and New Year holidays. However, Sliwa said Sistani also shoulders the most responsibility of prohibiting religious hate speech. Sliwa told Al-Monitor that the role of religious leadership is important, especially that of the supreme cleric in Najaf, so as to limit the effects of hate speech targeting the rights of religious minorities in Iraq such as Muslims, Yazidis, Mandaeans, Kakais, Baha’is and Zoroastrians. “When supreme clerics intervene to prohibit hate speech and discrimination on the grounds of religion, pluralism — which gradually turned absent in Iraq in the past few years — will be promoted,” Sliwa said.

Any crisis may result in an opportunity to reform and rebuild trust, provided it is dealt with appropriately. Similarly, the current crisis may have underlying opportunities of reform, as happened when its underlying challenges threatened Shiite-Christian relations, thus promoting diversity management in a post-IS Iraq.

The crisis following the video leak, as well as the stands taken by religious and political leaders, emphasized the importance of formulating a state-sponsored national strategy to limit hate, as well as the importance of an agreement between Muslim and non-Muslim minority religious leaderships that would support such a strategy through a unified stand, as Iraqis pursue freeing another Ninevah district from the hands of IS.