Not all Kurds on board with Kurdish independence vote

Some residents of Sulaimaniyah are fed up with the Iraqi Kurdistan government's poor management of the economy and may take their frustration out in the upcoming independence referendum. 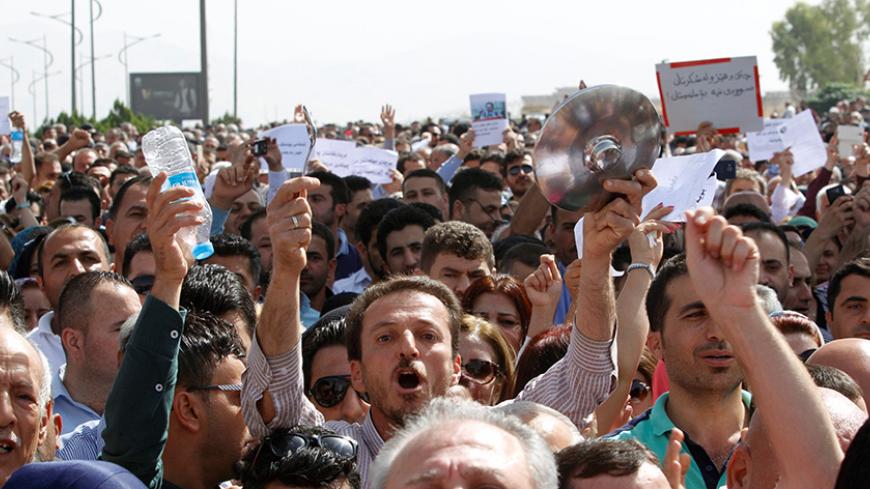 Protesters, most of them schoolteachers, demonstrate against the Kurdistan Regional Government for delays in paying their salaries, Sulaimaniyah province, Iraqi Kurdistan, Sept. 27, 2016. - REUTERS/Ako Rasheed

SULAIMANIYAH, Iraq — The majority of Kurdish parties agreed June 7 to hold a referendum for independence in September. While outside pressure to stop the controversial referendum has been constant, the deadliest blow might, however, come from within. Ordinary Kurds, in particular those in Sulaimaniyah, are angry about the government's mismanagement of the economy, and many appear ready to express their dissatisfaction in their approach to the referendum.

Over the last two months, Al-Monitor has spoken with several dozen people, primarily in Sulaimaniyah, to gauge their views on the upcoming referendum. Those interviewed include police officers, teachers, peshmerga, shopkeepers, taxi drivers and civil servants, the overwhelming majority of whom reject the referendum outright. They consider it a ploy by the current leadership to distract attention from its failure to efficiently run the government and manage the economy for the last 25 years, since the establishment of the Kurdistan Regional Government (KRG) in 1992.

Sulaimaniyah, nestled between several mountain ranges, is the largest province in Iraqi Kurdistan, the other two being Dahuk and Erbil. Sulaimaniyah is home to around 2 million of the region's total indigenous population of 5.2 million people. The anger and frustration among them is palpable.

“Why should I vote yes in the referendum?” Shaho Mahyaddin, a father of two, asked rhetorically. “After 17 years of being a traffic police officer, what do I have? No electricity. No water. I have no house or investment. I have nothing. The only thing I had was my salary [$980 a month], but over the last two years, they have cut it by more than 30%. How can I feed two children on that amount?"

Reeling from low oil prices, the KRG last year resorted to cutting the salaries of public sector employees — a bloated 1.4 million-person workforce — by up to 65% to counter the economic meltdown. The move had serious adverse effects for the economy, including a decline in purchasing power. Traders in the bazaar, already hit hard by the economic crisis, are now also worried about the possible impact of the upcoming referendum.

“People are buying only essential goods, such as flour and rice, because they are worried about the day after the referendum,” said Dashtawan, an assistant in a shop selling kitchen wares. “This July was the worst month in terms of trading in the bazaar for me, even worse than when Daesh attacked,” referring to the Islamic State offensive in summer 2014. Dashtawan said that with only few exceptions, the majority of the people he knows in the bazaar are angry about the economy and are very likely to vote no at the polls.

“We have had this business since 1953, but it has never been this bad,” said Najat, who has worked in his father’s tea house in Sulaimaniyah's main bazaar since he was 15. Najat said his business has been in decline for the last three years, since Baghdad and Erbil began having serious disputes.

“I used to sell about 400 teas per day, but now it is around 120,” said Najat, as he poured tea for the only customer in the little tea house. “Despite this, I will vote yes in the referendum, because this is a once-in-a-lifetime chance, and we should not miss it.”

Many civil servants have spent their savings since early 2014, when Baghdad refused to disburse Kurdistan's share of funding in the national budget, and salaries were cut. With no social security net, many residents are anxious about the negative impact of the referendum. Teachers are one group that has been particularly hit by the financial crisis, with cuts to their salaries of almost 70%.

“I will go to the polls, and I will mark a resolute no,” said Nesar, a primary schoolteacher from Halabja who has taught for 18 years. “The government has slashed my salary of $900 by 65%.” When Al-Monitor asked whether he would vote yes if the government reinstated his salary, he responded, “No, because I have no trust whatsoever in the current leadership.”

It is ironic that under the British and other regimes in Iraq, the people of Sulaimaniyah have always been rebellious, including at the forefront of the independence movements, but 25 years of Kurdish rule have turned them against a referendum for independence. During parliamentary elections in September 1930, the Kurds of Sulaimaniyah called on the British government, which held the League of Nations mandate over Iraq, to allow them to create an independent state as a British protectorate so they would not be at the mercy of an Arab king in Baghdad.

When the Sulaimaniyah Kurds realized the futility of their effort, anger grew toward the British and what the Kurds saw as their betrayal. Rejecting Baghdad Arab rule, they poured into the streets while most of the rest of Kurdistan remained silent. By the end of election day, 14 residents were dead and many more wounded, killed or injured at the hands of British and Iraqi forces.

In the second half of the 20th century, the people of Sulaimaniyah rebelled several more times. Ordinary Kurds were only too happy to name their children after a famous peshmerga commander or a battle that the peshmerga won against the Iraqi army. They have supported the peshmerga with whatever they could, but many are now scratching their heads and looking for answers to what went wrong. These days it is difficult to mention the name of a certain former peshmerga commander turned politician and not elicit a curse from the average Kurd. The people today despise or have no patience for their Kurdish rulers.

“The main problem is the trust between the public and the political elite,” said Abdulbaset Ismail, who fought for four years as a peshmerga commander against the Iraqi army in the 1980s. “We fought to free the Kurds from the yoke of the Iraqi state, but I never thought we would create this mess.”

Ismail, whose nom de guerre in the mountain was Halo Soor, is driving a taxi these days in Erbil and has difficulty making ends meet. He had commanded a unit of 26 peshmerga in the mountains, 24 of whom lost their life fighting the Iraqi army in the pursuit of Kurdish independence.

“Don't get me wrong. I am all for independence, but not under the banner of these thieves,” Ismail said. Asked if he would vote on Sept. 25, he replied, “I’d rather cut off my index finger than vote in the referendum.”