The US ambassador to the United Nations and rising Republican star has been sharply critical of Tehran. 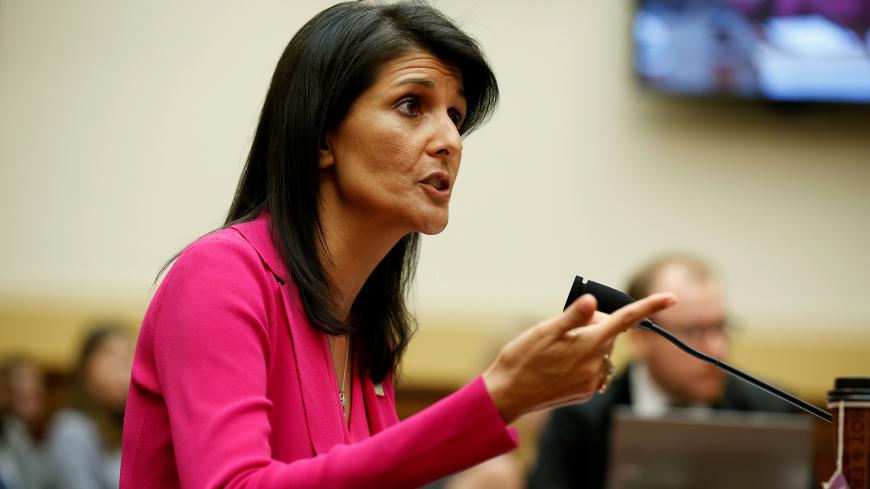 US Ambassador to the United Nations Nikki Haley testifies before the House Foreign Affairs Committee in Washington, June 28, 2017. - REUTERS/Joshua Roberts

WASHINGTON — Nikki Haley, President Donald Trump’s envoy to the United Nations, will travel to Vienna next week to discuss the US government’s concerns about the Iran nuclear deal with the International Atomic Energy Agency (IAEA). The high-profile visit comes as the former South Carolina governor has staked out a hard line on Iran and sharply pro-Israel positions, perhaps with an eye to her own future political ambitions.

Haley will hold meetings with IAEA leaders and experts in Vienna on Wednesday, the US mission to the UN confirmed to Al-Monitor. “She will meet with IAEA leadership, Iran safeguards experts and others,” a spokesperson said.

The IAEA has consistently certified Iran’s compliance with the Iran nuclear deal, which was reached in 2015 after years of negotiations and went into force in 2016. In addition to requiring Iran to remove several thousand centrifuges from its Natanz uranium enrichment facility, pour concrete into the core of its plutonium reactor and turn its underground Fordow enrichment facility into a research site, the Joint Comprehensive Plan of Action (JCPOA) also set up what negotiators have called the most extensive nuclear inspections and monitoring regime in history.

But Haley, ahead of the trip, signaled she was skeptical of Iran’s compliance with the deal, and vowed the Trump administration would not be held hostage to it.

“Iran cannot be allowed to use the nuclear deal to hold the world hostage,” Haley said in a press statement Tuesday, after Iranian President Hassan Rouhani threatened to leave the accord if the Trump administration tacks on more sanctions. “Iran, under no circumstances, can ever be allowed to have nuclear weapons. At the same time, however, we must also continue to hold Iran responsible for its missile launches, support for terrorism, disregard for human rights and violations of UN Security Council resolutions.”

“The nuclear deal must not become 'too big to fail,'” she added.

Haley’s visit to the UN atomic watchdog comes ahead of a series of key deadlines for the Trump administration to decide if it will continue to honor US commitments under the nuclear accord. A decision on suspending nuclear-related US oil sanctions is due by Sept. 14. The next quarterly deadline for the Trump administration to certify Iran’s compliance with the accord is Oct. 15.

It also comes ahead of the UN General Assembly opening session in September, where several world leaders are expected to press the Trump administration not to abandon the accord.

Trump, in an interview with the Wall Street Journal in July, said he thought Iran would not be deemed in compliance ahead of the October certification deadline. He repeated the claim that Iran is not living up to the “spirit” of the deal at his New Jersey golf club last week.

"I don't think Iran is in compliance," Trump told reporters at Bedminister, New Jersey, on Aug. 10. “I don't they're living up to the spirit of the agreement."

Advocates of the deal say the IAEA visit could be useful for Haley to better understand the landmark deal and the extensive monitoring arrangements that it provides.

“Hopefully, Haley's visit to the IAEA will be a reality check for the Trump administration,” Kelsey Davenport, with the Arms Control Association, told Al-Monitor.

“Trump is escalating his opposition to the nuclear deal, but failing to acknowledge what will be lost if the deal falls apart,” Davenport said. “The Trump administration needs to be reminded that international monitoring of Iran's nuclear activities is much more intrusive because of the agreement. The IAEA could lose verification tools and access to sites if Trump kills the deal, and with less transparency there is less assurance that Iran's nuclear activities are peaceful.”

Haley’s trip to Vienna comes after a recent staff shuffle that appears to have elevated Jon Lerner, a trusted political adviser and deputy chief of staff whom she brought with her from her days running for governor of South Carolina. Haley is said to particularly give Lerner her ear, sources said.

Haley spokesman Jonathan Wachtel, a former Fox News UN correspondent, and chief of staff Stephen Groves, previously at the Heritage Foundation, both resigned last week, citing family reasons, according to Haley. Another spokesman for the US mission to the UN, Kurtis Cooper, a career foreign service officer, also left this month to take a job with UNICEF.

The moves have stoked speculation among some UN missions and South Carolina political watchers that Haley may be mulling a potential presidential run in 2020.