By all accounts, US Defense Secretary James Mattis' visit to Turkey, intended to smooth fraught relations between the two NATO allies, went better than expected. 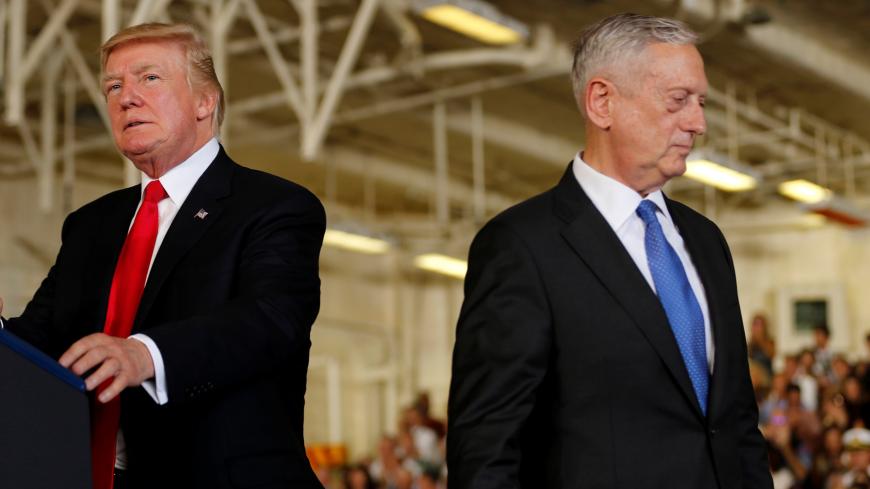 US Secretary of Defense James Mattis pledged support to Turkey in its ongoing fight against rebels of the Kurdistan Workers Party (PKK) during talks with the country’s president, Recep Tayyip Erdogan, Turkish and US officials said today.

The daylong visit was intended to help smooth fraught relations between the two NATO allies. The biggest thorn is the United States’ partnership against the Islamic State with the PKK’s Syrian franchise, the People’s Protection Units (YPG). Erdogan expressed anger over that alliance to Mattis during a half-hour meeting at the presidential complex. Mattis, in turn, repeated assurances that the US partnership with the YPG is solely tactical and confined to the campaign against IS.

Sources familiar with the substance of the talks confirmed reports in the Turkish media that Mattis had also discussed assisting Turkey against PKK militants based in the Qandil Mountains on the Iraq-Iran border and in the mainly Yazidi-populated Sinjar region on the Iraq-Syria border. The sources told Al-Monitor on condition of anonymity that US support would be “mainly on the intelligence and targeting side.” They dismissed claims by the Turkish press that US troops would carry out a joint ground offensive against the PKK in Sinjar. The Kurdistan Regional Government, a top US and Turkish ally, would also welcome US action to uproot the PKK from Sinjar.

The United States has been sharing intelligence on the PKK since the 1990s, long before the campaign against IS started. The CIA played a critical role in the capture of PKK leader Abdullah Ocalan by Turkish special forces in 1999.

There is discussion of upgrading the capacity of a so-called intelligence fusion center in Ankara to help Turkish officials better identify and track PKK activities with the help of drones.

Turkey is currently pressing the Pentagon to help it determine the location of what the sources called “high value targets” in Qandil and Sinjar. Though they declined to comment on this point, some administration officials have floated the idea of assassinating PKK leaders, notably Cemil Bayik, the PKK’s top commander in the field, as a sweetener for Turkey. Those advocating this approach also entertain what YPG officials term the “fantasy” that the Syrian Kurdish outfit can somehow be spun away from the PKK. If anything, the YPG would more likely break off its relationship with the United States than that with the PKK, a YPG commander told Al-Monitor via WhatsApp.

Other topics that came up included demands for the United States to train Turkish air force pilots. More than 300 pilots were purged after last year’s coup attempt, many of them F-16 fighter pilots. “The operational units won’t be able to absorb recent graduates and you’ll have units filled out with inexperienced people, which often leads to broken units,” Aaron Stein, a senior fellow at the Atlantic Council who closely follows Turkey, told Al-Monitor. Turkey has sought help with training from the United Kingdom, Denmark, Norway and the Netherlands, among others.

Sources briefing Al-Monitor said the Pentagon had not yet signed off on providing instructors for the air force. It may well be holding out for better cooperation at the Incirlik Air Base, from which much of the air campaign against IS is directed. Turkey has been making life difficult for the coalition by, for example, obstructing deliveries of jet fuel to coalition planes flying missions in support of the YPG-led Syrian Democratic Forces fighting IS on the ground.

Despite such tensions, Mattis is said to be personally invested in improving ties with Turkey. The sources confirmed that the former general had been planning to discuss joint action against al-Qaeda-linked militants in Idlib as a platform for renewed cooperation in Syria.

By all accounts, the visit went better than expected.

Mattis’ first meeting was with his Turkish counterpart Nurettin Canikli. The talks were scheduled to last for an hour but ran over to 90 minutes because the Turkish president was behind on his own schedule. Erdogan’s office asked Canikli to keep Mattis at the Defense Ministry.

Mattis and Canikli were meant to confer in the presence of their respective delegations, but the pair met alone instead, speaking through interpreters. “The energy between them was good,” said a source who spoke to the interpreters. Mattis, perhaps fearing otherwise, did not want to hold a press briefing after the meeting. Canikli then accompanied Mattis in his car to the presidential complex.