In his many years as Israel's prime minister, Benjamin Netanyahu has managed to destroy relations between Israelis and Palestinians, Jews and Arabs, and the right and left. 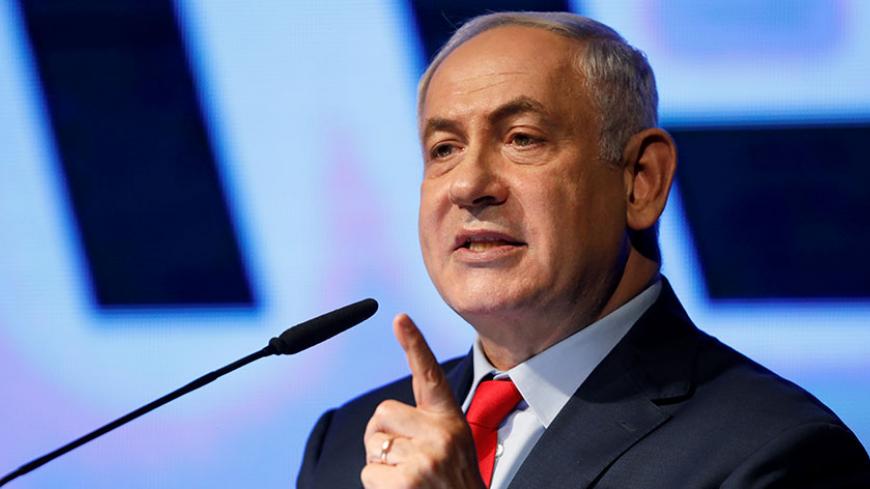 Israeli Prime Minister Benjamin Netanyahu speaks during an event by his Likud Party to show support for its leader in Tel Aviv, Israel, Aug. 9, 2017. - REUTERS/Amir Cohen

“We have to preserve [late Prime Minister Ariel] Sharon as we would an etrog. To keep him in a sealed box, padded with sponge, cotton wool and plastic wrap, at least until the end of the withdrawal. … He must be protected not only from the political banners, but also from the legal ones.” Veteran journalist Amnon Abramovich's iconic statement, made at a February 2005 seminar held at the Van Leer Institute in Jerusalem, was a response to claims that the press was handling Sharon with kid gloves despite the mounting criminal investigation out of support for his controversial plans to withdraw Israeli troops and settlers from the Gaza Strip. This attitude of whitewashing corruption in return for promoting peace has come to be known as “itrug,” and it was also relevant in 2008, when Prime Minister Ehud Olmert was facing corruption allegations.

Unlike those two politictians, Prime Minister Benjamin Netanyahu has burned every bridge on the road to peace. No one has invoked the term “itrug” in reference to the torrent of criminal suspicions raining down on him and his associates. Netanyahu set ablaze the one to the Palestinians, without which a solution based on the principle of two states for two people is not possible. During his many years in power, he missed no opportunity to miss an opportunity — an accusation generally leveled at the Palestinians — for dialogue with Palestinian President Mahmoud Abbas. Instead he took advantage of every chance to punish the Palestinians by expanding construction in Israeli settlements and demolishing Palestinian homes in the West Bank's Area C, designated as land for a future Palestinian state.

In a lengthy Aug. 6 article in The New Yorker, Hussein Agha and Ahmad Samih Khalidi wrote that the national Palestinian movement is nearing its demise. The two researchers, who were involved for three decades in efforts to achieve peace between Israel and the Palestinians, wrote that despite his limitations, Abbas could be the last Palestinian leader imbued with the moral authority and political legitimacy to achieve a negotiated peace agreement with Israel. Netanyahu preferred the preservation of his ultra-right coalition to the prospect of a peace agreement with member states of the Arab League, which would have provided a safety net for an arrangement with the Palestinians.

Even if Netanyahu wakes up tomorrow morning with a song of peace on his lips, he would likely be unable to uproot the Israeli hatred, fear and mistrust toward the Palestinians that he has nurtured for eight years. The Aug. 2 Peace Index, the periodic survey conducted by Tel Aviv University and the Israel Democracy Institute, provides cutting proof. It indicates that a sizable majority (77%) of Israeli Jews do not believe there is a connection between the current wave of terror attacks and Palestinian despair over the impasse in talks on a peace agreement. Under Netanyahu’s rule and with his encouragement, more than 70% of Israel’s Jews support Netanyahu’s proposal to execute the terrorist who stabbed to death three family members in the settlement of Halamish on July 21. About two-thirds of respondents support the death penalty for murderers of Israeli soldiers.

When Netanyahu disappears from public view, he will leave behind a scorched democracy. With his unusual gift for demagogic rhetoric, Netanyahu has managed to destroy everything that’s good about the system of checks and balances in Israeli society. Channel 10 poll results aired on Aug. 6 (after recent publications about Netanyahu's criminal investigation) show the Likud running well ahead of all other parties, reflecting the extent to which Netanyahu has managed to undermine public trust in law enforcement. His systematic reiteration of the lie that police investigators and state prosecutors, and of course “leftist” journalists, are “hunters” who only want to unseat an incumbent prime minister has clearly reached broad swathes of the public. But these people ignore the ridiculousness of this claim: Israel’s attorney general and police chief were both appointed on Netanyahu’s recommendations.

Netanyahu has successfully painted the guardians of the law as members of the elites. According to Netanyahu, this group includes human rights organizations — the groups that expose to the world the closely guarded secret that there’s no such thing as an “enlightened” military occupation of another people — which he accuses of “hunting” the State of Israel. In calling to pardon of Elor Azaria, the soldier convicted of manslaughter after shooting a wounded Palestinian attacker, Netanyahu has challenged the country’s judicial system. Surveys indicate that in this task, too, he has been successful.

Netanyahu has also carved deep scars into the relationship between Israel’s Jewish and Arab citizens (for instance, trying to get out the right-wing vote in 2015 by warning that the Arabs were “coming out in droves to the polls”). Most Israeli Jews view the Muslim establishment in Israel as a terror organization. A significant portion of Israelis (48%) polled for the Peace Index think or are certain that religious Muslim authorities in Israel knew in advance about the July 14 terror attack on the Temple Mount that killed two police officers. Only 39% believe the three terrorists from the Arab-Israeli town of Umm al-Fahm acted alone. On the other hand, a large majority of Israel’s Arab citizens (83%) is certain or thinks Muslim religious authorities (the Waqf, custodian of Muslim holy sites) did not have advance knowledge of the attack.

Netanyahu will not get to enjoy the fragrance of the etrog. At his disgraceful address on Aug. 9 to his followers at a Tel Aviv rally, Netanyahu ridiculed Israel Prize winner Dror Yehezkel, who had proposed that he "make a historical move that will nullify all personal sins" in an article for Haaretz that same day, calling upon Netanyahu to dismantle the right-wing coalition and advance a regional peace plan.

Netanyahu has managed to squeeze the life out of any prospect of peace. Those Israelis not swept up by the growing right-wing tide are willing to settle for what little they can get. They are already willing to give up on regional peace. So give them a politician who pays for his own cigars, whose wife who does not demand wealthy businessmen supply her with pink champagne. Give them a prime minister not under investigation for bribery. Give them a man who does not rip their society to shreds and does not incite against anyone who does not kowtow to him, and they will be satisfied.