A law Israeli Prime Minister Benjamin Netanyahu is expected to advance would allow the security Cabinet to declare war without approval of the entire government. 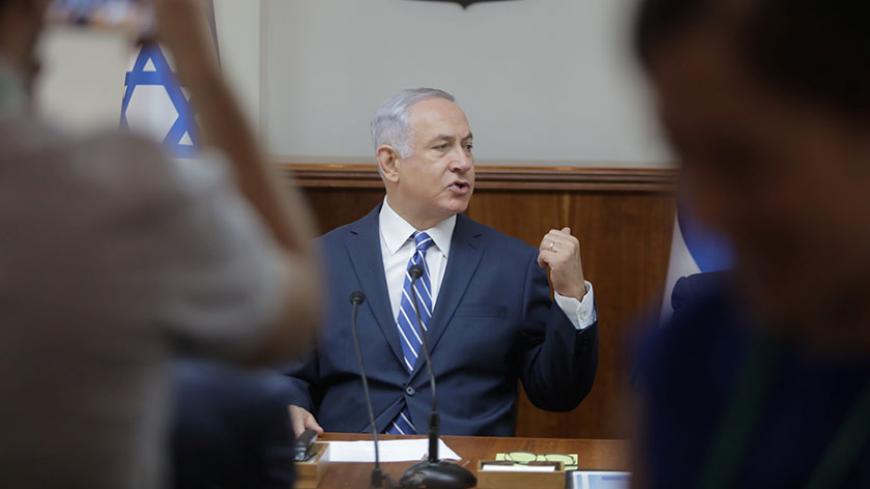 Naftali Bennett, the chairman of HaBayit HaYehudi, sent a series of tweets Aug. 14 in an attempt to stymie a political and media attack on Prime Minister Benjamin Netanyahu for his effort du jour to bolster his power at the expense of the government and the Knesset.

The preceding day, Channel 2 had aired an exclusive report revealing that over the past few weeks, Netanyahu has been promoting an amendment to the Basic Law Concerning the Government. The proposed provision would allow the prime minister “to declare war or to launch a military operation, without the need for its approval by the government, and in certain cases, without the presence of the entire [security] Cabinet.” According to the report, the new law would be submitted to the Knesset as soon as it returns from recess in October.

The report was headlined “A Declaration of War without Government Approval.” As expected, it has received considerable attention in the political world and in the media.

Meretz Chair Zehava Gal-On used her Facebook page to accuse Netanyahu of promoting a “law that will make it possible to send soldiers to their deaths, without the approval of the government, and on occasion, without the [security] Cabinet's approval either.” She went on to accuse government ministers of having lost all sense of shame. “Netanyahu has made them one step lower than a rubber stamp, and they are silent,” Gal-On wrote.

Netanyahu was apparently implementing the recommendations of a committee established a year and a half ago and led by Maj. Gen. (Res.) Yaakov Amidror to improve the efficiency of the security Cabinet. Netanyahu created the committee in response to Bennett's demands that the Cabinet's work undergo reassessment in light of disagreements in it over Operation Protective Edge in 2014 and the lessons learned from the campaign.

Bennett was quick to respond right after the report was aired, proclaiming, “It’s a non-story,” and arguing that the law being pushed by Netanyahu “secures the basis for a situation that already exists.” In an interview with the Israeli Public Broadcasting Corporation, KAN, he noted that according to foreign sources, Prime Minister Ehud Olmert's Cabinet had allegedly decided on the 1981 attack on a Syrian nuclear reactor without involving the entire government, even though the decision could have resulted in an all-out regional war.

Bennett said, “All this talk about Netanyahu being a warmonger is nonsense. … In the 21st century, we do not declare war with a fanfare of trumpets. What usually happens is a gradual deterioration of the situation.” He also noted that the proposal would reduce the possibility of leaks.

Bennett is right in many ways. The government authorizes the security Cabinet to make decisions about launching a military operation. If, however, this is already the situation, why take such a significant and demonstrative step like amending a Basic Law, and why announce it now?

The answer has to do with Netanyahu's current political situation and his legal entanglements. It will be quite obvious to anyone following Netanyahu's statements and actions since late last week that he is doing everything he can to knock police investigations into his affairs from the headlines and replace them with defense issues. In other words, now that his political future is hanging in the balance, Netanyahu wants the public to focus on one question: Who is the person that I want to run the country in wartime or during sensitive security situations? The prime minister is well-aware that on these issues, he is far ahead of all his rivals in all the polls, old and new rivals alike.

On Aug. 12, Netanyahu announced on his Facebook page that he had toured the security fence on Mount Hebron and paid a visit to Niv Nehemiah, who was injured Aug. 2 in a stabbing attack in the town of Yavneh. The next day, he announced to the Cabinet that Meir Ben Shabbat, a senior member of Shin Bet, had been appointed to head the National Security Council, which has not had a permanent head since January 2016.

Addressing a rally in Ashdod that evening, Netanyahu focused on security issues. He referred to a briefing to the government that morning by Mossad Director Yossi Cohen. In it, Cohen discussed the security challenges facing Israel. Netanyahu described them as follows: “I'll give you a summary in one sentence — ISIS [Islamic State] going out, Iran coming in. … Our policy is clear: We firmly oppose the military buildup of Iran and its proxies, primarily Hezbollah, in Syria. And we will do whatever it takes to protect Israel's security.”

Hezbollah Secretary-General Hassan Nasrallah contributed to Netanyahu's effort to shift the public agenda from criminal to security affairs when he released a speech marking the 11th anniversary of the Second Lebanon War. In it, he warned that if Israeli forces cross into Lebanon, they will encounter a military force “one hundred times stronger” than the Hezbollah of 2006.

It is safe to assume that the leak to Channel 2 about the immediate advancement of Netanyahu's war law is part of the same media strategy to shift the public's attention to defense issues. On the other hand, even if, as Bennett claims, the proposed law does little more than provide a secure basis for an existing situation, it can hardly be called a “non-story.”

The new law is just one of many actions and initiatives taken by Netanyahu to shift the balance of power between the various authorities and the main forces in the ruling establishment — the military, the diplomatic and the political. With his aggressive maneuvering in the legislature and the media, his troubling laws targeting the left and his efforts to weaken the legal system, Netanyahu is chipping away at the flimsy foundations of Israeli democracy.

Even if the war amendment is passed, the prime minister will not be able to declare war on his own. On the other hand, transferring authority to declare war from the government to the security Cabinet removes the government from one of the most critical decision-making processes, thereby weakening it considerably. If the duly elected government is deprived of this authority, there will certainly be those who will wonder if the same approach should be implemented in regard to other important issues as well.