Avi Gabbay is not the first chairman of the Labor Party who wanted to change the party's constitution in order to gain control, but he is the most ambitious one. 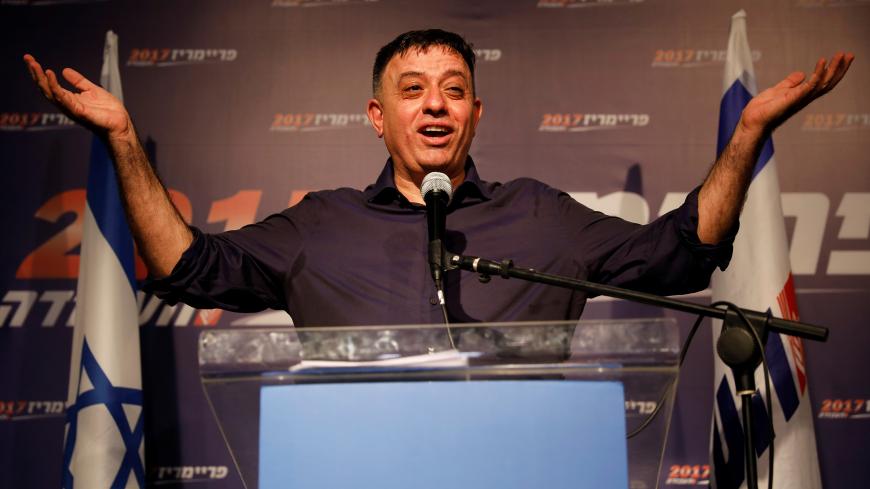 "Whenever I bypass something, I don’t go back on my tracks." It's one of Avi Gabbay's favorite sayings. The new Labor Party chairman uses it frequently to describe how determined and focused he is.

Not a single Knesset member responded officially to Gabbay's radical moves, even though the changes will affect each of them directly. Nevertheless, the dam will burst sooner rather than later, and their silence will turn into open warfare. Off the record, several Knesset members already sound disturbed by the new chairman. After all, he only joined the party a year ago, but he is already lording over them, and arrogantly at that. He is trying to get rid of everything that happened before him, or in other terms, not taking them into consideration.

Meanwhile, Gabbay, who was elected to his current position just six weeks ago, on July 10, is benefiting from the fact that not a single Knesset member wants to be the first person to come out against the new chairman. After all, he was able to restore the party's relevance, and his standing in the polls is good.

"As soon as the first person comes out against him, people will start saying that the Labor is committing suicide again and stabbing everyone along the way, but the fact is that the person doing all the stabbing is the party chairman himself. He just wants to take advantage of the fact that the Labor Knesset members want to maintain the image of a united front, but that will all end very soon," one senior party member told Al-Monitor on condition of anonymity. "He doesn’t realize where he is. While we want to return to power, this is not a one-person party, and it will not become one either. He'll learn that the hard way."

One thing Gabbay is well aware of is that he has very limited time to buttress his position. That is why he is charging forward, alienating Knesset members and leaving many casualties along the way. His proposed changes to the party’s constitution are just one example of that. Most Knesset members, including those who supported him, only heard about his changes through the media.

Under the title "A Toolbox to Victory," Gabbay presented his statement of intent, wrapped up in nice words. What the document really said was that he planned to neutralize the party's center of power and concentrate most of the administrative authority in his own hands. Hidden between the pages are clauses like one that would grant Gabbay exclusive authority to select the party's Knesset chair and committee heads, and even the committee members. He also wants the right to name the people to fill four seats on the party's Knesset list, with two among the first 10 people on the list, another in the second group of 10, and a fourth in the third group. As if that was not enough, he also wants the authority to decide where the party's Secretary-General Eran Hermoni will appear on the list. Right now, he is assured the "safe" seventh-place slot on the list.

Gabbay is not the first Labor chairman who has tried to change the party's constitution to make it easier for him to control its ruling bodies. Until now, the most prominent of the reformers was Ehud Barak, but Gabbay is going much further. He is attempting a "blitz" attack, without any internal dialogue. And he is trying to do it in a party that lives and breathes the democratic process, with all of its conflicting passions and all of its struggles.

Gabbay is planning to convene the party committee as soon as Sept. 4, so that it can approve his changes to the party’s constitution and embark on a new path. He says that he consulted with three former party leaders, all of whom warned him that if he doesn't make the changes right after his election and seize control for himself, he will find himself bogged down in party politics. Gabbay was referring to talks he had with Ehud Barak, Isaac Herzog and Shelly Yachimovich. All three of them had a tough time managing the party.

Gabbay is right that there is room to grant the party's chairman greater authority, but that is far from the drastic, unilateral measures that he is proposing. It looks like Gabbay is trying to gain absolute power in the party, just like his first political patron Moshe Kahlon did when he formed his own party and called the Knesset members that he appointed "my soldiers." But unlike Kahlon’s Kulanu, Labor was not created by Gabbay. He was chosen to lead it in a democratic vote, and he will find out the hard way that the other members of the party will not give up their own power without a fight. They can already be heard tossing around words like "dictator" and "autocrat" in reference to him.

As would only be expected, the move has already encountered opposition. The first person to come out publicly against it was Hermoni, who has been neutralized ever since Gabbay was elected party chairman. It was only on Aug. 20 that Hermoni heard officially that Gabbay proposed coming for his head. As someone with deep roots in party life, Hermoni has no plans to give up without a fight. He has already called on Gabbay to withdraw his proposal, warning, "Turning a party of the masses into a one-man party will scare off voters and give it less of a chance to win in the general election. I expect the chairman to act sensibly and responsibly and avoid taking drastic, unilateral and draconian measures, which will only result in unnecessary internal pressures." Hermoni intends to go beyond words and is already preparing to take the new chairman on in a legal battle.

Neither Hermoni nor the internal unrest in the party seem to have any effect on Gabbay. He continues to relay a sense of confidence and determination. From the moment he first set foot in the chairman's office after he was elected, he has made no effort to hide his disdain for political powerbrokers, the party's institutions and everything that was there before him. So, for instance, he didn’t bother inviting the party's Knesset members to his victory party, as if they were not wanted there. Given the party's codes of behavior, this was a jaw-dropping move on his part. Instead of uniting the ranks, he was giving factionalism a fresh boost of energy.

Gabbay could have asked the party's former leaders, such as Amir Peretz, Herzog and Yachimovich, to stand alongside him, but he believes that he really doesn't need any of them at the front with him. He is the "ace," at least as far as he is concerned, and everyone else is backdrop at best. Yet it is hard to see how Gabbay will manage to get all his proposed changes past the party committee. It is much safer to assume that he will have to give up on some of them.