While Egypt and Hamas coordinate efforts against the Islamic State in the Sinai Peninsula, Israel is providing intelligence to Egypt to boost these efforts. 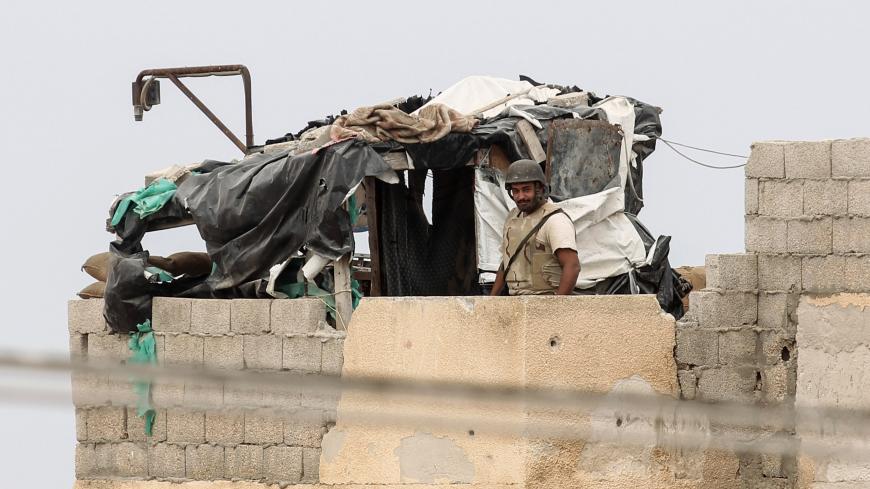 A picture taken from the southern Gaza Strip town of Rafah shows a member of the Egyptian forces standing guard near the border between Gaza and Egypt, Aug. 17, 2017. A suicide bomber killed a Hamas guard in southern Gaza, officials said, in what was seen as a rare Islamist attack against the Palestinian group that has run the enclave for a decade. - SAID KHATIB/AFP/Getty Images

How times have changed. Al-Monitor has learned that in the fight against the Islamic State (IS) in Sinai and Salafi groups in Gaza, there has been indirect cooperation as of late between Egypt, Hamas and Israel. Who would have thought?

A Palestinian from Rafah, Mustafa Kalab, conducted a suicide attack against Hamas operatives Aug. 17, killing an officer in the elite Nuhbah unit of Hamas' military wing and wounding five others. Thus, a group that embraced suicide attacks at the start of the 1990s has discovered to its surprise that the “weapon” that elevated it in the eyes of Palestinians in opposing the 1993 Oslo Accord, and even more so, during the height of the second intifada (2000-2005), has now been turned against it.

The honeymoon between Egypt and Hamas began a year ago, following the economic pressure Egypt had put on Gaza — for example, by destroying the smuggling tunnels on the Gaza-Egypt border and Cairo’s ultimatum that Hamas’ security apparatus act against Salafi groups or risk having to deal with President Abdel Fatah al-Sisi. Hamas, forced to choose between life and death, agreed to Egypt’s demand. For entirely practical reasons, today Egypt sees Hamas, yesterday’s enemy, as an ally in the fight against IS and as an additional and crucial component of its security arrangement, along with security cooperation with Israel.

Israel and Egypt have efficiently cooperated on security issues since the Muslim Brotherhood's ouster in 2013. It is reflected, among other things, in Israel consenting to Egyptian military forces entering the Sinai Peninsula, which is restricted by the Israeli-Egyptian peace treaty. There is a blackout regarding Israeli-Egyptian security cooperation from both sides in order, it appears, to avoid embarrassing Sisi, although former Defense Minister Moshe Ya’alon had confirmed in July 2013​, “Any Egyptian force that enters Sinai, enters with our approval. … They truly direct these forces to fighting terrorism.”

On Aug. 8 it was reported that in a special briefing in the Knesset's Foreign Affairs and Security Subcommittee, an unidentified participant said that the sound continuation of the security relationship with Egypt is more important to Prime Minister Benjamin Netanyahu than the return of personnel to Israel's Cairo Embassy, which has been deserted since December 2016. The importance of such cooperation is increasing by the day, as threats from Sinai grow more acute. This is where cooperation between Egypt and Hamas comes into the picture.

In June, senior Egyptian intelligence officials and a Hamas delegation led by Yahya Sinwar, the movement's leader in Gaza, and senior Hamas figure Halil al-Hiyah, held marathon talks in Cairo. While there, Sinwar also met with former senior Fatah figure Mohammad Dahlan and reached an agreement under which Hamas receives economic aid from Egypt, including deliveries of diesel fuel to operate Gaza's power station and supplies of building materials, and Egypt also opens the Rafah border crossing. In exchange, Hamas committed to meaningful security cooperation against Islamic terrorist organizations in Sinai and improving security at the Rafah crossing and along the border between Gaza and Egypt to prevent infiltration and arms smuggling.

The situation is clear to both sides: To the extent that Hamas proves that it is indeed acting against the groups threatening Egypt’s security, Gaza will enjoy the “fruits of its war against terror.” At the same Cairo meeting, the sides also agreed to establish a joint headquarters for Egyptian intelligence and Hamas’ security apparatus to cooperate in real time.

Meanwhile, Sinwar committed in his meetings with Dahlan to arrest wanted men living in Gaza based on lists supplied by the Egyptians. It can be assumed that some of the names on the list, associated with Salafi groups in Gaza, originate in Israel, which knows that the information will be passed on to Hamas. Thus, there is apparently indirect intelligence cooperation between Israel, Egypt and Hamas in the war against the common enemy — IS. Given the attack at the Rafah border crossing, it seems Hamas might now welcome indirect cooperation with the “Zionist enemy.”