Hamas finds itself at Egypt's mercy

Despite Hamas' apparent rapprochement with Iran, the movement is finding it can only pursue relations as Cairo allows. 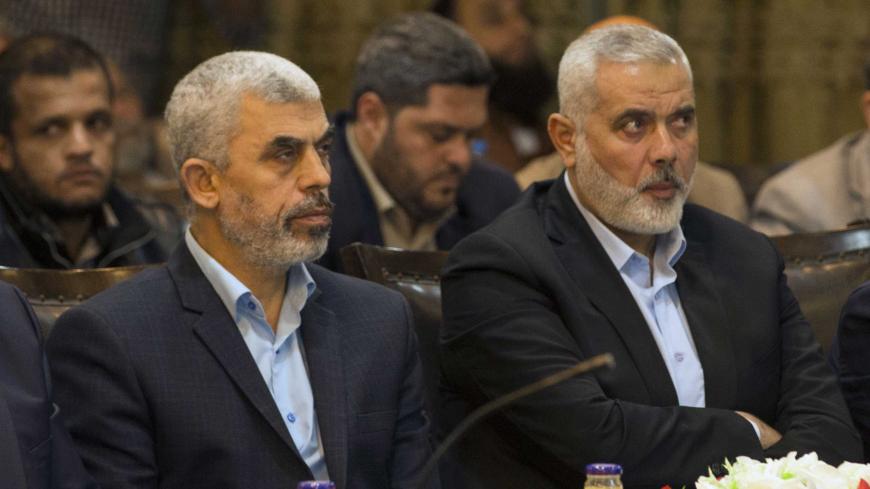 The leaders of Hamas gathered in Cairo on Sept. 9 for a high-level meeting. It was their first face-to-face encounter since Ismail Haniyeh's election to head the group's political bureau and the selection of Yahya Sinwar to lead the movement in Gaza. The two men were joined by Saleh al-Arouri, expelled from both Turkey and Qatar and now based in Lebanon; Sinwar's deputy Khalil al-Hayya; and Mousa Abu Marzouk, considered the Hamas leader closest to the Egyptian regime.

The one person who did not receive permission from Egypt to pass through the Rafah border crossing to participate in the meeting was Fathi Hammad, former interior minister in the Hamas government. A security source in the Palestinian Authority told Al-Monitor that the Egyptians suspect Hammad of having cooperated with jihadist forces in the Sinai, making him persona non grata in Cairo.

The Hamas summit in Cairo took place against the backdrop of Hamas' recent rapprochement with Iran. A Hamas delegation, including Arouri, turned up in Tehran on Aug. 2 for President Hassan Rouhani's second-term inauguration and held a series of meetings with top Iranian officials. The movement's representative in Lebanon, Ali Barakeh, went so far as to announce on Aug. 6 that Haniyeh would soon be visiting Tehran, noting, “Iran sees the continuation of resistance in Palestine as a vital issue," and "Iran is the only country that provides Hamas with economic and military support.”

After the summit in Egypt, Haniyeh set off for meetings with Qatari Emir Tamim bin Hamad Al Thani and with Turkish President Recep Tayyip Erdogan. On the other hand, he did not pay a visit to Tehran, as much as he may have wanted to. It is clear to Haniyeh and the rest of the Hamas leadership that Egyptian consent for their leaving Gaza through the Rafah crossing excludes “layovers” in Tehran. Cairo has yet to comment publicly on the renewed friendship between Hamas and Tehran, but Haniyeh and Sinwar, and even Hamas “bad boy” Arouri, know that they cannot dance at two weddings.

“It's all a kind of game,” the Palestinian security source told Al-Monitor on the condition of anonymity. According to him, declarations concerning renewed relations with Tehran and the reinstatement of Iranian aid to Gaza are effectively meaningless. “Egypt controls the border crossings, and [Egyptian President Abdel Fattah] al-Sisi has the key. If he wants, he can open up the oxygen tube, and if he wants, he can shut it off,” he said. “They — Haniyeh, Sinwar and everyone else — know the precise rules of the game and exactly how they are expected to act.”

An Israeli security official shared a similar observation with Al-Monitor. “Hamas has no alliance anywhere in the world today. The only people who will still give them the time of day are the Iranians,” he said, speaking on the condition of anonymity. “These declarations [by Hamas] are an attempt to say to Egypt, ‘Support us,’ or in other words, help us to exist and survive. Help us overcome the state of isolation now facing Hamas, and ease the situation in Gaza, because Iran is wooing us, and if we are left with no other choice, we will be forced to respond.”

The Palestinian security source told Al-Monitor, “It is not at all clear that the Egyptians were really that impressed by all the games surrounding an alliance between Hamas and Iran.” In his estimation, Sisi and Egyptian intelligence are “acting wisely, as usual.” He explained that they are allowing the entire Hamas leadership to meet in Egypt “to make them aware of the rules of the game that Egypt wants to see Hamas follow, so that they can control Hamas indirectly, or at least supervise it.” It is also his assessment that the Egyptians are allowing the Hamas leadership to speak about Iran as a friend and ally, but the situation is different when it comes to action. "Iran is far away. Egypt is a neighbor.” That is the whole of the law standing on one foot, at least as far as Egypt is concerned.

According to recent reports in the London-based newspaper Al-Hayat and the Dunia al-Watan website, Abu Marzouk has announced that Hamas has granted Egypt the exclusive right to negotiate a prisoner exchange with Israel. He also reiterated the Hamas ultimatum that before any negotiations whatsoever, Israel must first free the 54 prisoners released in the 2011 Gilad Shalit deal and rearrested by Israel in June 2014.

Egypt appears to be pressuring Hamas to reach a deal with Israel. By the time Haniyeh met with the Egyptian chief of intelligence, Khaled Fawzy, during the summit in Cairo, the Egyptians were expressing a desire to reach agreement on various issues under discussion with Israel, with the aim of crafting a more comprehensive deal in which both parties would have to compromise. Within Hamas, there are many reservations concerning Sinwar's uncompromising position on prisoners. It is obvious to many — apparently including Sinwar himself — that a deal with Israel mediated by Egypt would further improve the relationship between Hamas and Egypt and, at the same time, produce the mechanism necessary to lift the closure on Gaza.

“Hamas has no choice,” the Israeli security source told Al-Monitor. “They are trapped and will have to choose between a fantasy that will never be fulfilled and a deal that will get them considerably less than the prisoner exchange they dream of but will lead to other benefits such as an easing of the closure. In all previous meetings, including the meeting between Mohammed Dahlan and Sinwar in Cairo in June 2017, Israeli proposals placed greater emphasis on Gaza and much less on the release of prisoners.”

Now is the moment of truth, as far as it concerns Haniyeh, Sinwar and the other senior Hamas officials received as welcome guests in Cairo. They must now decide whether they will accept the Egyptian proposal of security cooperation against jihadist forces in Sinai in exchange for the opening of the Rafah crossing and supplies of raw materials as well as whether to participate in a prisoner exchange with Israel. Above all else, they must recognize that Egypt is in control of the situation, while they are a movement under siege, which must do whatever Egypt tells them.