Turks are angry about Forbes magazine's story that listed Turkey as being a dangerous destination for women traveling alone, but do they have cause? 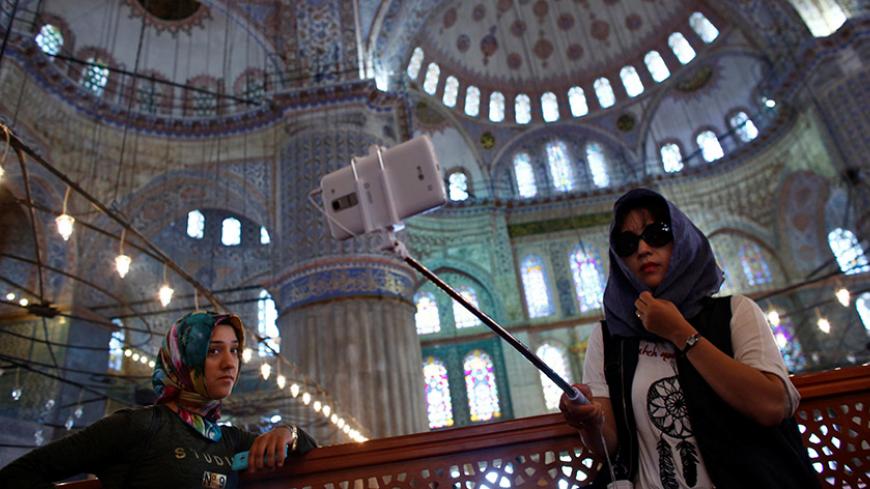 In an article that could deliver a further blow to Turkey’s ailing tourism sector and international image, Forbes magazine on July 28 described Turkey as one of the 10 most dangerous places for solo female travelers.

The article, which ranked Turkey ninth, was based on the travel website Trip.com’s country evaluations in March, adding in information from US State Department warnings. The Trip.com website, while generally rating Turkey poorly, also features remarkably positive reviews of the country and of Istanbul — reportedly now Europe's cheapest city to stay in — by several female and male travelers.

The Forbes' piece hit a nerve with Turkey’s Justice and Development Party (AKP) government. Pro-AKP media outlets pronounced the article to be presumptuous and untrustworthy. The daily Hurriyet said the story had provoked a wide reaction in Turkey, without clarifying the exact nature of this response or explaining what critics found objectionable in the ranking.

The hospitality industry has taken a series of serious hits in the last two years, including terror attacks and the failed coup attempt of July 2016. According to Tourism and Culture Ministry statistics, Turkey received nearly 36 million foreign visitors in 2014, with the number going down about 200,000 the following year. In 2016, the number of foreign visitors sank to nearly 25.3 million. The numbers appear to be dropping even more this year; in the first half of 2016, slightly over 11 million visitors were reported to have visited Turkey.

On Aug. 1, the ministry issued a press release about the Forbes article, saying it involved misperceptions that have “targeted Turkey for some time.” The ministry accused the article of being based on speculation rather than fact and charged that it deliberately sought to portray Turkey as a dangerous destination for women to influence the way the international community sees the country. Yet the statement, presented by the pro-AKP media as “a severe response by the ministry to Forbes,” did not provide data to counter Forbes’ arguments or to assure the international community that Turkey is a safe and hospitable destination for solo female travelers. The ministry's statement did not even mention traveling solo. In this case, what was not said is the crux of the matter.

The owner of one of the most prominent tourism firms in Turkey, who spoke with Al-Monitor on condition of anonymity, said, “I believe what bothered the government about the Forbes’ report is the issue of security. They have totally disregarded that the matter was about solo female travelers. Indeed, I am not even sure if they ever wonder what kind of services they could provide for solo female travelers or gay or transgender tourists so that they would feel safe and welcome in Turkey. Istanbul used to host one of the biggest Gay Pride marches in Europe for years. For the last few years, what gets in the international press is news of police brutality in those marches. Conference tourism is almost dead. This is significant because about half of the participants in conferences were solo female travelers.”

The Forbes ranking comes after a decade of AKP policies that have been pushing women out of public spaces. Most of the party's base would say that a good woman’s place is in the house — unless the woman happens to be working for the AKP or other religious causes. The party's moves to push women out of public view and Islamicize the image and rhetoric of the public arena have left their marks.

For over a decade, government officials in Turkey have been telling women to get married as soon as possible, not to seek divorce, to have as many kids as they can, not to wear makeup or even laugh in public. Indeed, we have heard advice for pregnant women to avoid walking out of the house and for women to seek a means of transportation that is only for females. In the last year, random attacks on women in parks, buses or other public spaces have become commonplace. The pressure has become so heavy that the hashtag #Kiyafetimekarisma (Don’t mess with my outfit) was a trending topic on social media for days and there have been several protests in major cities demanding freedom to dress as one wishes. Sexual and physical attacks as well as murder of women are on the rise in Turkey and the perpetuators often get off lightly.

Al-Monitor spoke with several seasoned female travelers who have been to Turkey multiple times as well as young women who visited Turkey once. Although none of them visited Turkey as “solo travelers,” all of them, at one point or other, had to walk alone at some point during their visit. When asked about safety concerns, none of them felt any danger in Turkey, but admitted that they had been “worried” or “concerned” at times. Some said that the reason for their initial worry was the rape and murder of Pippa Bacca, an Italian artist, in 2008, and the murder of Sarai Sierra, an American in Istanbul.

In both incidents, locals questioned why these women had traveled alone, as traveling solo for women is not the norm in Turkey.

Women travelers, except the ones who lived in Turkey for some time, told Al-Monitor that one of their biggest impressions about Turkey was that Turkish women refrained from talking to them. For the women travelers, that signaled a wider issue about Turkey and Turks: This is a male-dominated society, from taxi drivers to shopkeepers. It was mostly men who would do the talking. In rural areas, local women would rarely engage foreigners.

This, in turn, raises concern that the number of women in Turkish public spaces — city centers, bazaars, bars — is gradually diminishing. Therefore, women who dare to be present and active in public face higher risks.

The above and other similar news indicate that traveling or just being in public in Turkey for women has become much more difficult with or without a headscarf. Dressing modestly would help minimize visibility but it will not guarantee safety on the street. One Omani college student from the United States who was visiting Istanbul told Al-Monitor, “We were at an upscale halal restaurant [not serving alcohol] with my family and I went upstairs to go to the bathroom; a middle-aged man coming out of men’s bathroom groped me, but I could not say anything as I did not want my dad to get into a fight. The man was a customer dining with his family, with daughters about my age.”

Jenny White, a professor at Stockholm University's Institute for Turkish Studies, is a keen observer of Turkish culture and politics who has researched, lived in and written about Turkey. Asked about changing risk factors for female travelers, White told Al-Monitor, “You may no longer be able to rely on ordinary citizens to step in and help you.”

She added that in Turkish society, there was “savage hatred” between different groups of people and an inability to rely on other people for help, as well as a sense of impunity that if you do something to someone else, you won't be held accountable.

Robyn Eckhardt, a food and travel journalist and cookbook author who has traveled in Turkey extensively to do research for her book, highlighted the hospitality in rural areas, particularly in the southeast. She said, “I think there is a changing risk factor for any foreign traveler in Turkey caused by pronouncements from various members of the governing party about 'foreign plots' to destabilize Turkey and 'foreign spies' traveling around the country. Some people are likely to take such 'warnings' seriously, and if they do, this will not have good implications for visitors.”

Despite the social turmoil and difficulties faced by local and foreign women, Turkey remains an intriguing travel destination with a vibrant young culture. It is not fair to list Turkey as one of the 10 most dangerous places to travel for women. It is crucial, however, to raise a red flag that rising xenophobia and misogyny are leading to the isolation of the country in all aspects. What can the solo female travelers do then? Stay sober, appear strong and in control at all times and be vigilant even at halal restaurants.