Despite pressure from conservatives and a lack of funds, the Iraqi House of Fashion revives its glory days with a museum catwalk. 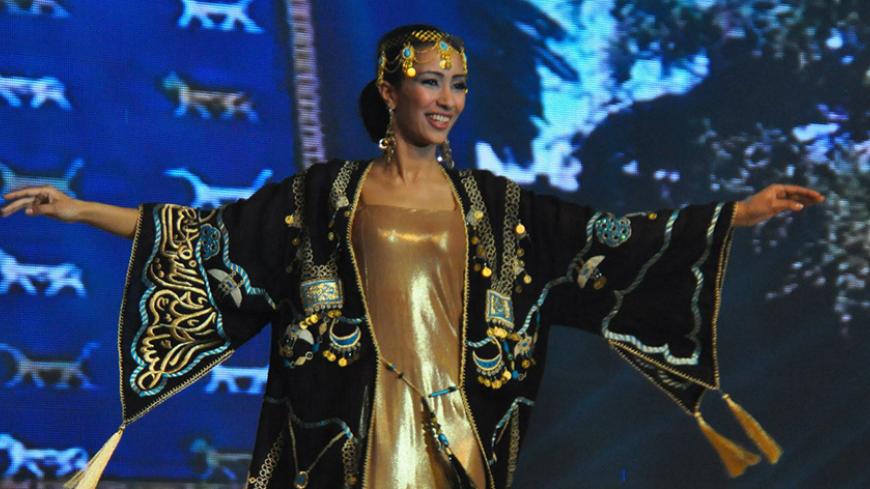 A model shows off her outfit at a show organized by the Iraqi House of Fashion. Posted April 10, 2013. - Facebook/Iraqi-house-of-fashion

BAGHDAD — Models dressed in clothes reminiscent of Iraq’s multicultural past walked among the imposing statues at the Iraqi Museum in an impressive show in July that celebrated the liberation of Mosul, as the Iraqi House of Fashion bolstered its cultural presence and shrugged off the low profile it has held since 2003.

Founded in 1970 with the aim of conserving ancient Iraqi culture, the Iraqi House of Fashion started as a financially independent legal entity. However, the Iraqi House of Fashion Law was passed in 1985 with the help of the Iraqi Ministry of Culture and Media to help the fashion organization receive governmental support. This support resulted in the building of a luxurious palace, considered to be one of the country's most beautiful architectural monuments, on Palestine Street in eastern Baghdad.

But the good times for the fashion house came to an end in 2003 due to the US invasion of Iraq and the lack of security that swept through the country. The house was looted, its founder and manager had to retire and leave the country and the splendid palace was abandoned and slowly fell into ruin. Although the Iraqi House of Fashion has made a comeback in the last few years, the present conservative environment makes it difficult for the organization to return to its days of glory.

In a country still suffering from war and terrorism, organizers of fashion shows remain fearful. For instance, Karar Nushy, a fashion designer whose work is well-known in the industry, was murdered July 4. The case remains unsolved.

“Organizers of such cultural events are still being threatened by those who consider it a Western tradition that could corrupt society,” Saif al-Obeidi, designer and technical manager for Iraqi House of Fashion, told Al-Monitor.

“One of the biggest challenges in launching fashion shows is the lack of fashion models,” Obeidi said. “The models keep receiving threats from conservative groups, clans and families that consider fashion shows a disgrace, and most just give up.”

Other difficulties include a lack of government subsidies, raw materials and the absence of new technologies, not to mention the low salaries in the fashion industry that drive many people away. "Consequently, there are only a few fashion shows, either by the Iraqi House of Fashion or a few personal efforts by individual designers,” Obeidi added.

But the difficulties did not stop him from using his own means to participate in a fashion show for children with cancer held July 10 in the United Nations building in Baghdad, where he displayed 28 fashion pieces that reflect the history, folklore and heritage of Iraq.

Obeidi said that many of the costumes were inspired by the different epochs of Iraqi history. “Our last production featured dresses inspired by the Assyrian deity Lamassu, statues of which [the Islamic State] destroyed in Mosul, the dress of [Sumerian] Queen Puabi, a dress from the Sumerian War and Peace mosaic" and a long robe inspired by the apparel of Assyrian women. Obeidi said the house also made a "historical royal suit, the design of which dates back to Sumerian civilization."

Obeidi noted, “The next project is to create a Sumerian guitar outfit.” This would be inspired by the decorations and structured shape of the ancient Sumerian guitar in the warm tones of brown and gold.

Regardless of how little governmental support the fashion show received, Sinan Kamel, an Iraqi designer, still succeeded in organizing Baghdad Fashion Week for the third year in a row on March 20. Baghdad Fashion Week hosted local designers and models in the Babylon Hotel in downtown Baghdad. “It is so difficult to find models who consent to get on the catwalk, as they fear [the reactions of] their families and clans and are apprehensive about the security situation,” Kamel told Al-Monitor.

Melad Hamid, a fashion designer known for his participation in international fashion shows, told Al-Monitor that the fashion industry in Iraq needs to further develop and focus more on design than commerce.

Hamid suggested founding an Iraqi fashion academy as well as university fine arts departments and art institutes inside and outside Baghdad to teach fashion. He also recommended taking advantage of Western expertise through inviting professors to Iraq to educate a new generation of diploma-holding designers who would enrich the Iraqi arts and fashion scene.

“There should be a government-sponsored mechanism that would bolster joint projects between clothing factories and traders, to create financial resources for designers with limited income who are unable to carry out their designs,” Hamid added.

Haider al-Mowla, a lawmaker and member of the parliament’s Cultural Committee, told Al-Monitor, “The committee knows well the reasons behind the deterioration of the cultural industry and the lack of a sufficient support.” He said the main reasons were Iraq’s “being busy with the war on terrorism and the financial crisis.”

Mowla said the committee is working on a project that would develop the fashion art/industry, ease financial difficulties and bring better conditions for the people who work in the fashion industry, such as designers, organizers and those working for the Iraqi House of Fashion. This includes establishing a union for those working in the fashion sector such as the House of Fashion employees, or designers in the private sector. “The union would defend their rights, find them work opportunities and defend their intellectual rights concerning design and production,” Mowla said.

Mowla noted the union would also create momentum for Iraq’s fashion culture, help the media value fashion and advocate the sense of style and aesthetics that are often rejected by conservative forces and clans.

“The committee is going to enforce the existing laws and legislate new ones to provide financial support for those who work in this sector, encourage them to find profitable investments and protect their production and designs from intellectual theft, especially among a rising phenomenon of intellectual and cultural rights being violated,” Mowla said.