Questions abound over future of Ahmadinejad

Despite his increasing isolation, former Iranian President Mahmoud Ahmadinejad has been reappointed as a member of the Expediency Council. 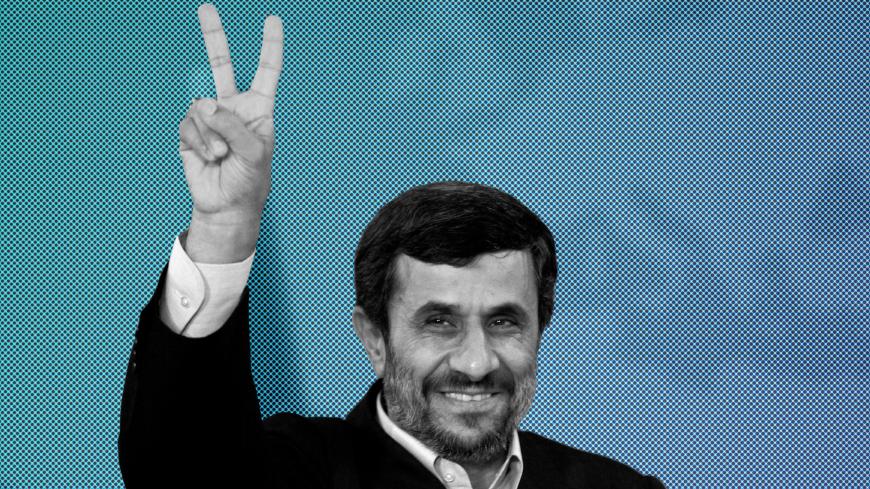 TEHRAN, Iran — Iran's Principlists kept themselves at the top of the pyramid of power through former President Mahmoud Ahmadinejad and his circle of associates. Now, however, this same circle is harshly attacking its former allies and even some pillars of the political establishment, so much so that some Principlist factions have asked for probes into some of its actions.

Ahmadinejad is a staple of Iranian politics. Whether in office or sitting at home, he is always hungry for publicity.

The former president was planning to run for a third term in the May 19 elections, but was disqualified by the Guardian Council. Considering that many of his administrations’ officials were involved in the campaign of conservative cleric Ebrahim Raisi, there was a general sense in Iran that Raisi’s platform was aligned with Ahmadinejad's. Ahmadinejad released a video message on May 15, just a few days before the elections, officially announcing that he did not support any of the six candidates despite the presence of some of his former aides in a certain candidate’s campaign.

Hamid Baghaei, Ahmadinejad’s onetime vice president for executive affairs, and Esfandiar Rahim Mashaei, his adviser and closest confidant, have both stayed loyal to the former president. Baghaei, who was also disqualified from running in the May election, wrote Ahmadinejad’s name on the ballot in front of cameras on election day. Having been arrested in June 2015, Baghaei was once again detained on July 9 this year. On July 16, judiciary spokesman Gholamhossein Mohseni Ejei disclosed some of the charges against him, including embezzlement and collusion over government contracts. Ejei added, “The defendant was given 2 million euros at his disposal, which [was allocated for something] else, but there is no record of that money anywhere.”

Ahmadinejad was vocal in his criticism of Baghaei’s arrest. On the same day as the charges were announced, the former president declared that he holds the judiciary responsible for his former deputy’s life and well-being. In a statement released three days later, July 19, he claimed that all the charges against Baghaei were baseless and asked that the records for the 2 million euros noted by Ejei be made public. Baghaei was released July 26 on bail, which Ahmadinejad’s associates claimed had come from public donations.

Another case concerning the former president and his associates is that of the sudden deposit of 16 billion tomans (about $4.8 million) on Aug. 3, 2013 — right before he formally left office — into an account of the University of Iranians, which is owned by Ahmadinejad and Baghaei. The money came from a government account.

Principlist political analyst Naser Imani, commenting on the increasing isolation of Ahmadinejad and his associates and their apparent radicalization, noted in an interview with Iranian reporters, “It is not unusual, for signs of irrationality were evident during Ahmadinejad’s final years in office."

In this vein, political analyst Sadegh Zibakalam told Al-Monitor, “It was predictable from the very beginning that this faction will gradually become radicalized. They are hoping to attract a wider range of people, and they believe that they will achieve this goal if they verbally attack different government institutions. This is while the number of Ahmadinejad supporters has, in general, shrunk and his remaining supporters come from the lower classes of society — villages or small cities — and thus do not follow the news closely and do not know what Ahmadinejad is doing.”

After Ahmadinejad tried and failed to run for a third term against the public advice of the supreme leader, many thought that his political life had come to an end. However, on Aug. 14, Supreme Leader Ayatollah Ali Khamenei reappointed Ahmadinejad for a five-year term on the Expediency Council, which is mainly tasked with mediating disputes between the parliament and the Guardian Council.

While the reappointment has been interpreted in a variety of ways, Principlists for the most part believe that Ahmadinejad’s presence on the Expediency Council is his last chance to play a role on the Iranian political stage. It should be noted, however, that all the incumbent members of the council were reappointed to new terms by the supreme leader. Zibakalam told Al-Monitor, “I doubt there will be a major change, although it is possible that for a short while, there will be less controversies and chaos concerning Ahmadinejad and his associates.”

Ahmadinejad has always proven to be a radical. There was a time when this radicalism was welcomed by the Principlists, but there were also times when they expressed disapproval. Whatever his political future holds, he is likely to remain associated with populism and radicalism.