The English-language edition of Yeni Safak has reported that Turkey asked the group to dissolve itself and for the militants, who seized Idlib province last month after routing Turkish-backed Ahrar al-Sham rebels, to relinquish the critical Bab al-Hawa border crossing linking Idlib to Turkey’s Hatay province. 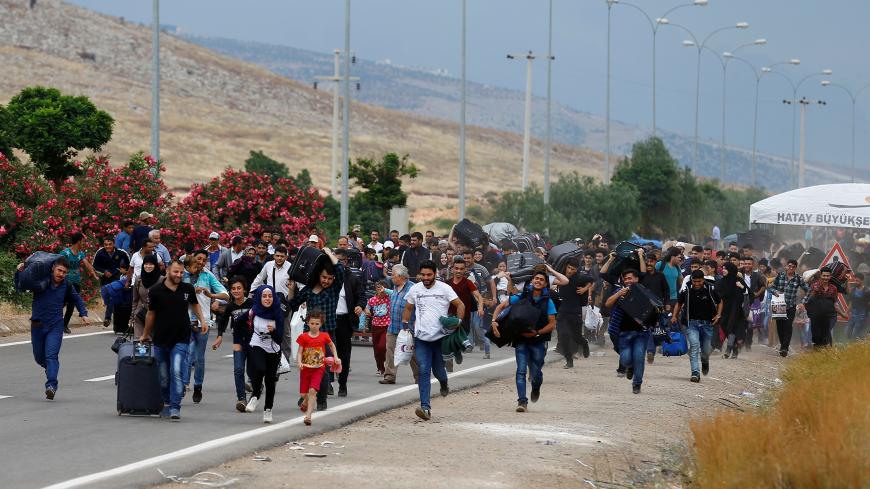 Syrians who say they are returning to Syria ahead of Eid al-Fitr carry their belongings as they walk to the Turkish Cilvegozu border gate located opposite the Syrian crossing point of Bab al-Hawa, Turkey, June 14, 2017. - REUTERS/Umit Bektas

In its article “Turkey’s plan to save Syria’s Idlib from occupation,” the English-language edition of Yeni Safak reported that Turkey had asked the group to dissolve itself, offering, “its fighters could join the ranks of other opposition [groups] if they elected to do so.” Turkey also wants the militants, who seized virtually full control of Idlib province last month after routing Turkish-backed Ahrar al-Sham rebels, to relinquish the critical Bab al-Hawa border crossing linking Idlib to Turkey’s Hatay province to “a group approved by Turkey.”

Bab al-Hawa remains the economic and humanitarian lifeline to northwestern Syria. Like other border crossings with Syria that have since been closed, Bab al-Hawa has been a vital source of income for the groups controlling it. But the flow of commercial traffic and weapons has all but halted as Turkey bows to international pressure to exercise stricter control of its borders.

Turkey’s “recommendations” were supposedly accepted by Syrian oppositionists, tribal leaders and assorted local stakeholders during a set of meetings held in central Idlib. Yeni Safak claimed HTS had agreed to all the proposals except that of disbanding itself.

US and other coalition officials have aired worries about the al-Qaeda presence in Idlib, warning the militants could be planning new attacks against Western targets there.

Sources familiar with talking points to be raised by US Secretary of Defense James Mattis when he meets Turkish leaders in Ankara this week told Al-Monitor that Idlib would likely be among them. The sources, who sought anonymity due to the delicate nature of the subject, said the United States was exploring ways to take joint action with Turkey in coordination with Russia to free Idlib of HTS, which all three consider a terror group.

Yeni Safak, however, cast the Turkish scheme as an effort to foil purported plans by the United States, France and Russia to take military action in Idlib, using the HTS presence there as a pretext. Such a move, argued the newspaper, would trigger a large-scale humanitarian crisis with millions of displaced civilians heading to Turkey and to areas inside Syria controlled by the Turkish-led Euphrates Shield force. The paper was in effect rehashing the tired trope that any coalition moves against Idlib would ultimately hurt Turkey to the benefit of the Syrian Kurds.

The newspaper did not quote any Turkish officials, nor did it attribute any of its claims, which it stated as fact. The story ran with no bylines, another indicator that the Turkish government may have been behind it.

Turkey, which is already home to three million Syrian refugees, has legitimate concerns. As Yeni Safak pointed out, military action against HTS in Idlib would unleash a further influx of Syrians. Thus having failed to tame HTS with Ahrar al-Sham, Turkey is now apparently hoping to coax the group into submission through diplomacy.

If so, contend some Syria analysts, it's just more pie in the sky. Sam Heller, a Beirut-based senior fellow at the Century Foundation who has written extensively about HTS, told Al-Monitor, “I don’t know if Turkey actually proposed this to HTS and the rest of the opposition inside Idlib. If this is real, I don’t think it will actually solve anything.”

Heller went on, “Most of these asks — establishing a nominally civilian government, handing Bab al-Hawa to an administration that is likewise nominally civilian and potentially dissolving HTS into some unified rebel body — actually tracks pretty closely with the steps HTS is already taking inside the northwest.”

He concluded, “I don’t think anyone in the US government would be convinced by some kabuki handover of power to a ‘civil’ administration controlled in practice by HTS.”