The contrasting statements of Turkey's president and prime minister over the latest row with Germany signal a rift ahead of the 2019 presidential election. 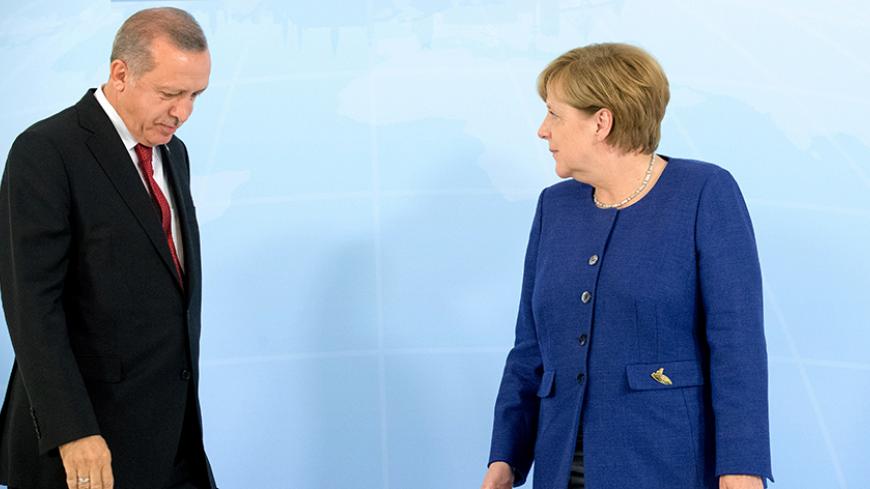 ANKARA, Turkey — The crisis between Turkey and Germany, escalating with back-to-back spats, reached new heights this month with the arrest of German national and human rights consultant Peter Steudtner during a police raid on a meeting of human rights defenders, whom the government accuses of planning subversive activities. Following the arrests, Germany for the first time raised the prospect of sanctions against Turkey.

German Foreign Minister Sigmar Gabriel said on July 20 that Berlin could no longer guarantee German company investments in Turkey because of the lack of “legal certainty.” He also warned that German citizens were “no longer safe from arbitrary arrests” in the country. “We can’t go on as we have before,” Gabriel said. “We have to be clearer than before so that those in charge in Ankara understand that such a policy won’t be without consequences.” Gabriel’s statement was widely perceived in Turkey as a threat of sanctions and a veiled call to German entrepreneurs and tourists to stop investing and vacationing in the country.

With bilateral tensions simmering, two disparate approaches emerged from Ankara: President Recep Tayyip Erdogan sharpened his tone toward Germany, and figures close to him made statements that threatened to further fuel the row. Meanwhile, Prime Minister Binali Yildirim and some Cabinet members have sought to de-escalate the situation, adopting moderate language and stressing that tensions will harm both sides.

Speaking in Istanbul July 21, Erdogan urged Germany “to sort itself out.” Referring to the prospect of economic sanctions, he said, “They are attempting to threaten Turkey, [relying on] the wealth they have acquired by chance. There is something called a free market in the world. They are not aware even of that.”

Erdogan denied that Turkey was investigating German companies on suspicion of “supporting terrorism,” a claim the German media had reported, quoting German officials. According to the reports, the companies were suspected of links to followers of the US-based Turkish cleric Fethullah Gulen, whom Ankara accuses of being behind last year’s coup attempt.

“I called the National Intelligence Organization [MIT] and the interior minister to ask them whether we have launched any inquiry or investigation related to German companies,” Erdogan said. “The answer I got yesterday was that no inquiry or investigation had been launched concerning any German company and that all [such claims] are lies.” Erdogan then accused German officials of making “baseless” statements to “scare off” German investors in Turkey.

In another outburst, at the July 25 parliamentary meeting of the Justice and Development Party (AKP), Erdogan claimed that Steudtner is a spy. He charged, “You deny speaking opportunities [in Germany] to Turkey’s president and ministers, but then your spies would come here, roaming in hotels. … This cannot be.”

Turkey's prime minister, however, has seemed aware that the tensions, perhaps mounting toward an irreversible breaking point in bilateral ties, could result in a hefty bill for Ankara. Following Erdogan’s harsh statement, Yildirim sought to cool the row. “There is no point in further straining things,” he said July 22 in Ankara. “I’m appealing to German officials: We should act in a calmer manner and with more restraint. We believe we can resolve the issues through dialogue.”

Days later, however, a condemning revelation made Turkey's position more difficult. Officials in Berlin revealed July 24 that despite the denial by Erdogan, Ankara had submitted a list of 681 German companies to Interpol, including global giants like Daimler and BASF, and requested German assistance in investigating them. The Turks subsequently withdrew the list. Later in the day, Turkish Deputy Prime Minister Bekir Bozdag announced that a “big communication mistake” had been made, asserting that no German company was under investigation.

Still, the “communication mistake” revealed that Ankara had, indeed, drafted a “terror list” of German companies and that the information Erdogan had received from MIT and the Interior Ministry was either incomplete or misleading. Picking up the pieces again fell to Yildirim.

On July 27, he invited the executives of 19 leading German companies to the Cankaya Palace in Ankara, scrambling to reassure them that their operations in Turkey were safe. Stressing that the strain in bilateral ties was “temporary,” he said, “We can never think of [a situation in which] investors, which have been present in Turkey for half a century and are now ingrained in the minds of the people as Turkish rather than German companies, are subjected to unfair criticism and pay a price for these ties.”

The divergent pronouncements of the president and the prime minister suggest a rift in the government's ranks on how relations with Germany should be handled. According to Erdogan Toprak, a senior lawmaker for the main opposition Republican People’s Party, Yildirim is acting more realistically because his political ambitions are lower than Erdogan's.

Following the April 16 referendum that narrowly approved a shift to an executive presidency, Yildirim ceded AKP leadership to Erdogan. Allowing heads of state to also be party members was among the constitutional amendments in the referendum. In 2019, when the election of a president under the new system is scheduled to take place, Yildirim must cede the premiership, as it will be eliminated.

In a statement on his personal website, Toprak remarked, “Aiming at 2019, the president and the small team around him are displaying a hawkish policy, feeding on confrontation and tensions. Prime Minister Yildirim, for his part, speaks of dialogue to resolve the problems. … The prime minister has handed over the party chairmanship and is now waiting for his premiership duty to end. Because he has no [political] aspirations left, he is being more moderate and realistic. The president, meanwhile, is ready to burn all bridges and smash anything to get the executive presidency. This in-house polarization on foreign policy is detrimental for Turkey. Turkey today is left with only one ally in the region and the world, which is Qatar.”

Germany is among Turkey’s top trading partners, and significant numbers of Germans travel to Turkey for tourism. Any German sanctions could therefore prove quite costly for Turkey, which is still trying to overcome the damage from sanctions imposed by Moscow after Turkey downed a Russian warplane in 2015. Were Germany to mobilize other EU members to follow suit, the damage could reach an insurmountable scale. Yildirim recognizes the risk and is thus trying to reassure German investors, while Erdogan persists in his hawkish stance as part of a domestic campaign aimed at winning the 2019 presidential election.

At a July 27 AKP meeting, Erdogan told lawmakers, “If there are any [among you] who are tired, they should step aside.” This could be seen as a sign that Erdogan is worried about losing the election. It also may be a message to Yildirim that he, too, should step aside if he cannot keep pace with Erdogan. In sum, the tensions with Germany have exposed a political rift within the AKP's ranks. Yildirim's prioritizing of Turkey’s national interest, rather than his own personal interest or the party’s, could lead to his stepping down before 2019.