Turkish companies have a lot of experience to offer in reconstructing Mosul, but their government's political indiscretions pose serious obstacles. 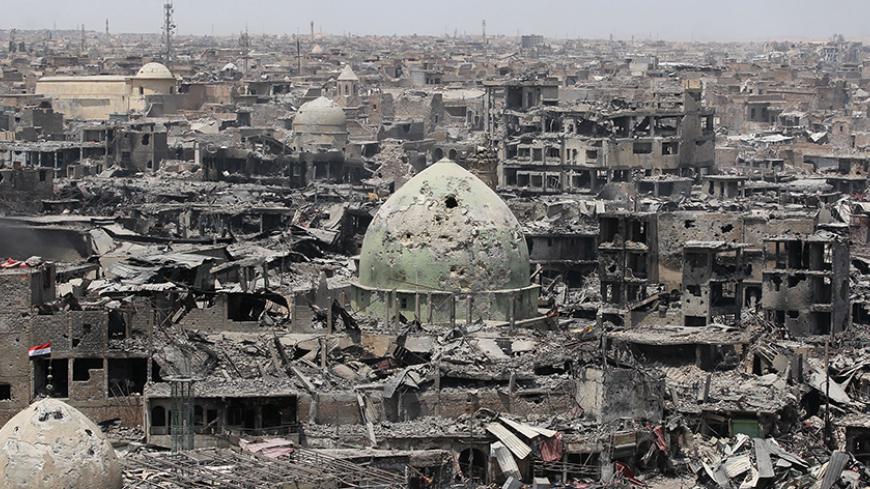 Turkey is working hard to find a place for itself in Mosul's future now that the Iraqi city is rid of the Islamic State (IS). But tensions with Baghdad during the past couple of years will make it difficult for Turkey to attain the profitable role it seeks in the city's economic and political restructuring.

There are many in Turkey who feel Mosul should have remained inside Turkish borders after the War of Independence in the early 20th century — hence the nostalgic comments and affection one hears from the Turkmens of Mosul and some Sunni families who were loyal to the Ottoman palace.

But Turkmens, who were drawn into sectarian rifts when IS arrived, are no longer a reliable card for Turkey to play. Turkey’s claim as Sunni guardian caused Shiite Turkmens oppressed by IS to turn against Turkey.

Turkey’s affinity for some Sunni Islamists who had welcomed the IS capture of Mosul also backfired on those who were advocating IS’ rise as “freedom for Sunnis against Shiite rule.” Turkey had problems justifying that attitude, even with its friends.

Further compounding Turkey's shortsighted vision was its heavy reliance on the Sunni forces of Al Hashd al-Watani led by former Ninevah province Gov. Atheel al-Nujaifi. Turkish President Recep Tayyip Erdogan added to the acrimony by branding Iraq's Popular Mobilization Units (PMU) fighting IS as "terrorists" and saying only Sunni Arabs, Sunni Turkmens and Sunni Kurds should be in Mosul. These actions are all emerging as obstructions to the role Turkey wants to play in reconstructing Iraq, despite the impressive accumulation of experience by Turkish companies in undertaking major projects in that country.

The Turkey-Iraq Business Council, linked to the Foreign Economic Relations Council, met July 11 in Istanbul to assess the situation. Representatives of 150 companies participated. The business council's chairman, Emin Taha, said there are attractive opportunities from construction to textiles that those companies want to work on.

Several sources told Al-Monitor that Turkey's refusal to evacuate the Bashiqa army base despite Baghdad's demands is also preventing Turkey from opening a new page in relations with Iraq. Turkey is aware of the importance of good economic relations with Iraq, and there have been some efforts to improve bilateral ties since Turkish Prime Minister Binali Yildirim visited Baghdad on Jan. 7. But every major step is blocked by the Bashiqa issue. Iraqi reactions on this matter affect not only political-diplomatic contacts but also economic ties.

This is how various sources assessed the situation for Al-Monitor:

Now eyes are on international donors for reconstruction. Kuwait wants to host a conference on that topic, possibly at the beginning of 2018. Iraq's government says it will need about $100 billion for a 10-year national plan.

Britain promised a $12 billion credit facility for Iraqi projects; the two sides signed an agreement on the deal April 4.

Iran, which provided substantial support to Iraq and the PMU in the fight against IS, is also determined not be left out of Iraq’s reconstruction projects.