Turkey's divisions on display on 'Day of National Unity'

Turkey's "Day of Democracy and National Unity" marking the defeat of last year's July 15 coup attempt turns into a celebration of the president and his Justice and Development Party. 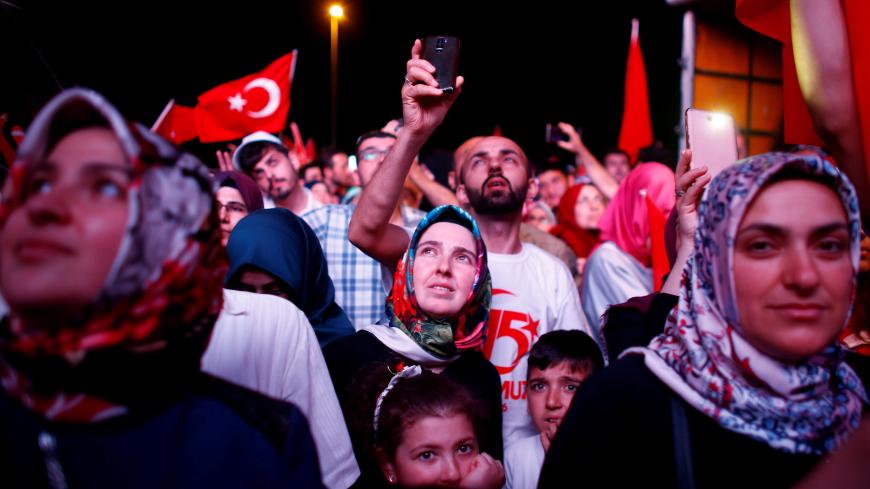 People listen to Turkish President Recep Tayyip Erdogan during a ceremony marking the first anniversary of the attempted coup, at the Bosporus Bridge in Istanbul, July 15, 2017. - REUTERS/Osman Orsal

July 15 marked the first anniversary of last year's botched military coup in Turkey. The date has been officially deemed “Day of Democracy and National Unity," and the celebration ceremonies and commemoration of the “martyrs” who lost their lives during the turmoil on that night and during the early hours of July 16 revealed deep divisions within Turkish society. Those splits and further polarization exposed on the first anniversary of the failed putsch were accentuated by the two articles published in the British daily The Guardian.

One was by Turkish President Recep Tayyip Erdogan titled “Turkey, a year after the attempted coup, is defending democratic values.”

Erdogan wrote in his op-ed piece, “The thwarting of the coup marked a turning point in the history of democracy; it will be a source of hope and inspiration for all peoples who live under dictators.”

Yet he then followed by directing venomous criticism toward Turkey’s Western allies, writing, “Unfortunately Turkey’s allies, particularly our friends in the west, have been unable to fully appreciate the significance of what happened. … Their hypocrisy and double standards deeply disturbed the Turkish people, who risked everything to defend freedom.”

The other was an op-ed by Kemal Kilicdaroglu, the main opposition leader of Turkey, titled “In the year since Turkey’s failed coup, democracy has become near dictatorship.”

The Republican People's Party leader wrote, “In the year since, Turkish democracy has given way to a near-dictatorial regime. Recep Tayyip Erdogan, the president, exploited the crisis to declare a state of emergency, led a purge against all oppositional voices and started ruling by decree."

He argues that following April's presidential referendum — which he calls "illegitimate" and notes was "held under the state of emergency and in breach of Turkish electoral laws and international standards" — the ruling Justice and Development Party (AKP) imposed "a sui generis political system worthy of an authoritarian state."

The daylong ceremonies revealed the deep fissures and dangerous divergences in the Turkish political arena. The special session of parliament for the “Day of National Unity,” despite its name, actually displayed the prevailing national disunity. When Erdogan entered parliament, legislators belonging to the opposition parties did not rise and did not applaud him, giving the president a chilly welcome.

The special session of the parliament, designed for a show of national unity by commemorating the defeat of the July 15 coup attempt, instead displayed anything and everything but national unity.

Even the July 15 exhibition in parliament inaugurated by Speaker Ismail Kahraman was polemical. In the photo exposition and the booklet prepared for the event, there was not a single photo of the besieged members of the parliament on the night of the coup other than those of the ruling party. The program for the extraordinary session of parliament held at 2 a.m. July 16 was changed three times and in the final one, all the opposition leaders were denied the opportunity to deliver speeches; Erdogan and Kahraman did speak. In reaction, opposition members of parliament boycotted the session and also refused to take the booklets distributed for the commemoration.

The night of July 15 and the early hours of July 16 saw commemoration events transformed into a show of Islamist symbols and of Erdogan himself. The reciting of the Holy Quran from the minarets of 80,000 mosques all over the country was accompanied by collective prayers in the garden of the parliament building in Ankara. Islamic and Islamist symbols marked the ceremonies in Ankara and in Istanbul. Savvy vendors selling drinking water in the summer heat marketed their product by shouting, “Whoever drinks goes to heaven.”

One of the most striking and unforgettable events marking the commemoration occurred when users of Turkish cellphone providers heard a recorded July 15 message by Erdogan each time they made a call. Fellow Al-Monitor columnist Amberin Zaman referred to this practice as "beyond Orwellian." Nonetheless, it went on until 7 a.m. on July 16.

The zenith of the ceremonies was in Istanbul, which saw an impressive one-man show by Erdogan and also a significant response to the recent 450-kilometer (280-mile) march for justice from Ankara to Istanbul led by Kilicdaroglu.

In Istanbul, the opposition parties did not take part. However, Erdogan, assisted by Prime Minister Binali Yildirim and the ruling AKP networks, organized their own mass undertaking. Tens of thousands filled the highway leading from the Asian side of Istanbul to the Bosporus bridge renamed “The July 15 Martyrs Bridge” and poured toward the European side where Erdogan delivered a venomous speech targeting Kilicdaroglu, as well as other political opponents, while also attacking Fethullah Gulen, the cleric whom Turkish authorities claim was the mastermind of the failed coup.

In his fiery speech, Erdogan again touched upon the issue of capital punishment and said he would approve a bill reinstating the death penalty if parliament proposed it.

Not surprisingly, his statement drew a prompt response and warning from Jean-Claude Juncker, the European Commission president. Juncker wrote In Germany’s Bild am Sonntag, “If Turkey were to introduce the death penalty, the Turkish government would definitively slam the door on EU membership."

Erdogan sounded adamant on this issue. In the early hours of July 16, back in Ankara and speaking at the special session of the parliament — this time in the absence of opposition deputies — he reiterated his commitment to approve capital punishment if the parliament sends him such a bill for his signature. “I will not hesitate to approve it, if sent to me. I do not care what Hans or George say," he said.

The lesson Erdogan derived from last year’s coup attempt is peculiar and different from most of the Western leaders or nearly half of Turkey’s electorate. In the address to parliament in the early morning hours of July 16, he also said, “July 15 indicated to us that we — as a state and nation — have to be strong. If we are not strong, there are so many enemies lying in ambush, unwilling to grant us the right of existence. If I name them one by one, we will be confronted by a very serious international crisis.”

Guided by such a strong siege mentality, Erdogan very well may take more dramatic steps in foreign and security policy. In domestic politics, he could impose more repressive measures, even against the main opposition leader.