In a rare interview, accused Turkey coup mastermind Fethullah Gulen dismissed the charges and said of President Recep Tayyip Erdogan, "I want to spit in his face." 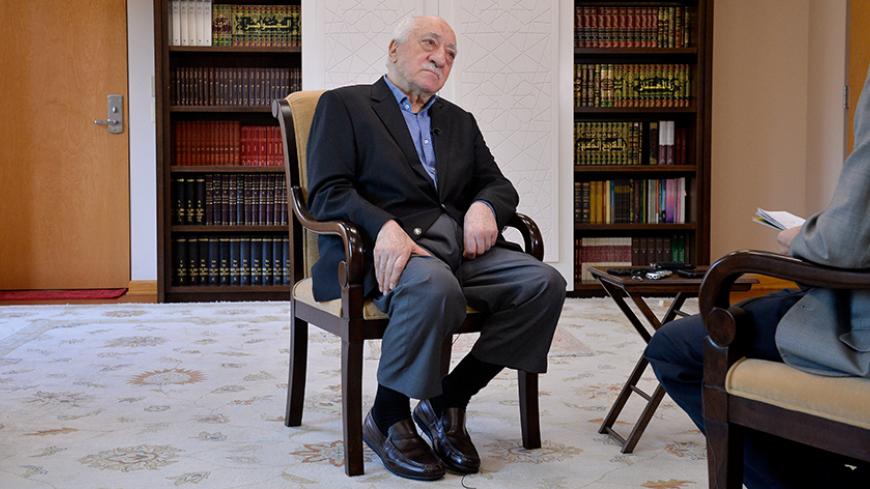 As the first anniversary of the July 15 coup attempt in Turkey draws near, one of the main characters in the bloody events that unfolded that night has reached out to the Western media to air his side of the mysterious affair.

Fethullah Gulen, the secretive Sunni cleric who is accused by Turkey’s President Recep Tayyip Erdogan of masterminding the coup, spoke to NPR’s Robert Siegel on July 10 at his sprawling yet Spartan compound in the Pocono Mountains in Saylorsburg, Pennsylvania.

The 76-year-old Gulen flatly denied any responsibility in the failed putsch that left 265 people dead, saying, “If any one among those soldiers had called me and told me of their plan, I would tell them, ‘You are committing murder.’”

Gulen went on, “The perception that I control all of this … that I tell people to do things and that they are doing them … there is no such thing.” He insisted that he had stood against “all coups.”

But those who are familiar with the inner workings of his once powerful movement argue that the notion that Gulenists were not involved is simply not credible.

Rusen Cakir, a prominent commentator on Islamic tarikats (fraternities), wrote in the independent online news portal Medyascope.tv, “I believe the main body of the putschists and their leadership were officers connected to the Gulen movement.”

That theory has been corroborated by the testimonies of various alleged coup plotters currently on trial, though the circumstances under which their confessions were extracted remain a matter of controversy, as human rights watchdogs point to torture during pretrial detention. So does the fact that Erdogan himself claimed to have learned about the coup through his brother-in-law seven hours after the national intelligence agency MIT was tipped off about it. This and other inconsistencies have fueled the claim voiced by the main opposition leader, Kemal Kilicdaroglu, that once the government caught wind of the putsch it was allowed to unfold to smoke out Erdogan’s enemies.

The prevailing consensus is that many Gulen loyalists, who were set to be kicked out of the Turkish armed forces in an annual Supreme Military Council meeting in August, did take part in the coup. Assorted nationalists, Kemalists and others who were disgruntled with the increasingly authoritarian Erdogan participated as well.

But the Turkish government has yet to provide compelling evidence — a smoking gun, as it were — proving that Gulen personally ordered the coup, which is why the United States has refused to extradite him to Turkey.

Howard Eissenstat is an associate professor at St. Lawrence University. The Turkish history expert told Al-Monitor in an interview, “It's unlikely, though possible, that Gulen himself had foreknowledge or even ordered Gulenist participation.” He added, "There are certainly examples of Gulen taking personal control of initiatives. But I think there is a tendency to attribute to the Gulenists a level of organizational coherence that it doesn’t actually have.”

In any case, the government has used the coup as cover to carry out massive purges in the security forces, the judiciary, assorted government ministries and academia. From the theater to fertility clinics, baklava manufacturers and the media, no area of Turkish life has been left untouched by the crackdown. A tally compiled by Bloomberg shows that over 100,000 state employees have been fired so far in anti-Gulenist actions. Turkish Justice Ministry data reveals that 50,546 suspected members of Gulen’s network were in prison on July 3. They include over 150 journalists and thousands of Kurds. Yet Erdogan breezily claimed in an interview with the BBC to be aired later this week that there are only two journalists in prison.

The evidence presented against those accused of Gulenist and other "terror" links has reached Orwellian proportions. The opposition Cumhuriyet newspaper reported that a female university student was detained in the Black Sea port city of Samsun after locals tipped off police about books by Gulen spotted in a rubbish bin. Forensic examiners apparently determined that some of the fingerprints on the books belonged to the student, though it remains unclear why they would have had them on file or if she had a prior criminal record. The affair illustrates the culture of snitching and opportunism that is pervading the country. Burnishing one’s anti-Gulen credentials has become the key to survival and success.

It’s hard to believe that Gulen and Erdogan were once allies. They made common cause against the hardcore secularists who had dominated the armed forces when Erdogan's Justice and Development Party (AKP) first came to power in 2002. Thousands of Gulenist sympathizers began to rise in the bureaucracy and more critically in the security services, where at least some began gathering incriminating information on myriad officers, politicians, businessmen, journalists and others to be used against them if needed. This culminated in the now quashed December 2013 corruption probe into leading AKP figures, including Erdogan and his family. Gulen and Erdogan more than likely fell out over power and the division of spoils, not a clash of ideals.

No love was ever lost between the fellow imams — Erdogan was formally trained as a Muslim cleric as well, hence his oratory skills. But both were reviled by the secularist establishment, which unsuccessfully sought to overthrow Erdogan by getting sympathetic prosecutors to open a 2008 court case to ban the AKP. Gulen reminded Siegel of his AKP connections, saying, “Thousands of people have come here to the retreat to visit, among them 50 members of parliament, former President Abdullah Gul, former Foreign Minister Ahmet Davutoglu …”

Gulen, who cloaks himself in an aura of false humility, denies any material ambitions. Yet a harsh core shone through in the NPR interview: “If they ask me what my final wish is I would say the person who caused all this suffering and oppressed thousands of innocents, I want to spit in his face.” Did he mean Erdogan? “It can’t be anyone else. He is the oppressor."