Tunisia’s parliament passed landmark legislation to fight violence against women in the country. 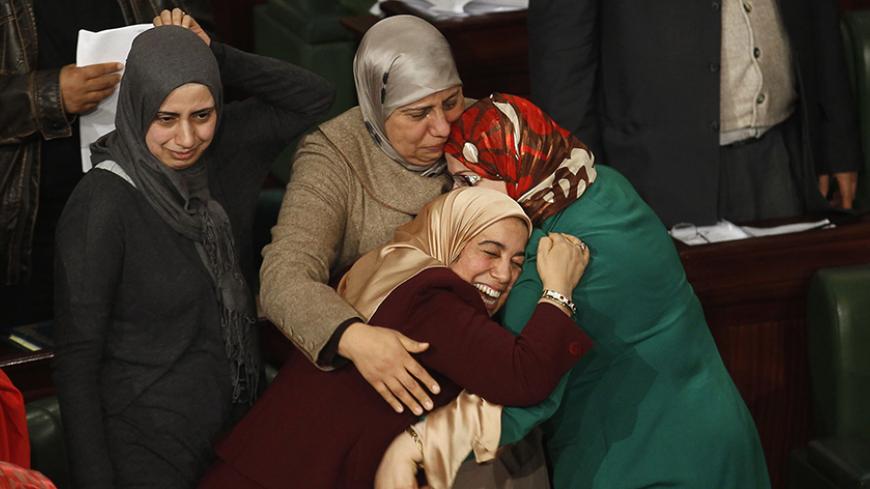 Members of the Tunisian parliament celebrate after approving the country's new constitution in the assembly building in Tunis, Jan. 26, 2014. - REUTERS/Zoubeir Souissi

Despite Tunisia’s reputation as one of the regional leaders on women’s rights, violence against women has remained a major problem. In a 2010 study by the National Office of Family and Population, 47% of Tunisian women reported being victims of violence.

The new legislation, which was led by an amalgam of representatives from different political parties and civil society organizations, addresses several key issues. The law addresses different forms of violence, defining violence against women along the lines of the United Nations Handbook for Legislation on Violence Against Women: “any physical, moral, sexual or economic aggression” against women specifically.

Women’s rights activists have spent decades pushing for this type of legislative change. After working on the law for over six months, the parliamentary representatives involved in writing it broke into cheers upon its long awaited passage. Parliament member Bochra Belhaj Hmida passed out celebratory jasmine blossoms. Other parliamentarians broke out in song, chanting the Tunisian national anthem in the middle of the assembly.

The law may seem straightforward, but lawmakers had to ensure it would be acceptable to most of their constituents. Given its importance, civil society activists were closely involved in perfecting every detail of the text.

Mohamed Ben Hamida, a research assistant at parliamentary watchdog organization Al-Bawsala, told Al-Monitor, “This is a revolutionary law in Tunisia. Wednesday was a very happy day since activists have been working on these issues for more than 20 years.”

Ennahdha parliament member Imen Ben Mohamed, who has herself been working on the initiative for over six months, elaborated, “I believe this law is as revolutionary, if not more, than the 1956 Personal Status Code,” which outlawed polygamy and formalized the procedures for divorce.

With the new law set to be implemented within six months, men who have sex with underage girls will no longer be allowed to escape prosecution by marrying their victims. This loophole shot to prominence when Ala Chebbi, a well-known talk show host, told a woman on national television to marry her rapist. Women’s rights activists immediately called for the suspension of Chebbi’s show and went on the offensive to repeal the law.

On top of eliminating this loophole, the new legislation also raises the age of consent from 13 to 16. Both Ben Hamida and Ben Mohamed believe this to be one of the most important provisions of the new law.

Additionally, workplace and wage discrimination is now punishable by a fine of 2,000 Tunisian dinars ($817).

In the public sphere, sexual harassment will now be a criminal offense, punishable by two years in prison and a fine of 5,000 Tunisian dinars (just over $2,000).

Marital rape will now be criminalized. Before, judges were able to say that marital rape was not actually rape and therefore not a crime. Now, marital rape is always treated as rape, with no room for ambiguity.

As with any law, the next concern is implementation. The writers of the legislation made sure that the text clearly designated responsibility to different Tunisian ministries for preventing and properly handling cases of violence against women. Hospitals and schools will soon become venues for raising awareness so that Tunisia's newest generation is fully sensitive to the topic. Police officers, judges and other officials and public servants will be retrained. Belhaj Hmida believes the first years of its implementation will be difficult, but the same was true for the Personal Status Code, which took many years to take root in the collective psyche and state institutions.

Although the law is groundbreaking, some activists believe it is only one battle in the fight for true equality. “This law only concerns violence and is only a part of our work. For Tunisia to develop, we need to continue working on women’s rights issues,” said Ben Mohamed. Belhaj Hmida agreed, saying, “We would like to have included more, but had to make compromises to keep everyone happy. We hope to get rid of all discriminatory laws one day.”

Human Rights Watch has heralded the law as a major accomplishment but expressed concern that it does not go far enough, pointing out that Tunisian Muslim women are still prevented from marrying non-Muslim men, an issue Belhaj Hmida plans to work on in the future.

Belhaj Hmida also wants to get started on removing unequal inheritance protocols, under which women receive only half of what men do. Ben Hamida said, “We couldn’t put everything into the violence against women law because this would have made its implementation too difficult. But our next fight is inheritance. We really need to focus on it, as it is a very complicated subject.”

Regardless of its limitations, the law marks a milestone in women’s rights progress not only in Tunisia but in the world at large. It codifies violence against women as specific and punishable crimes after years of the Tunisian legal system failing to protect half its population.