The United States confirmed today that the US-backed Syrian Democratic Forces are taking heavy casualties in an effort to push the Islamic State out of its stronghold in Raqqa. 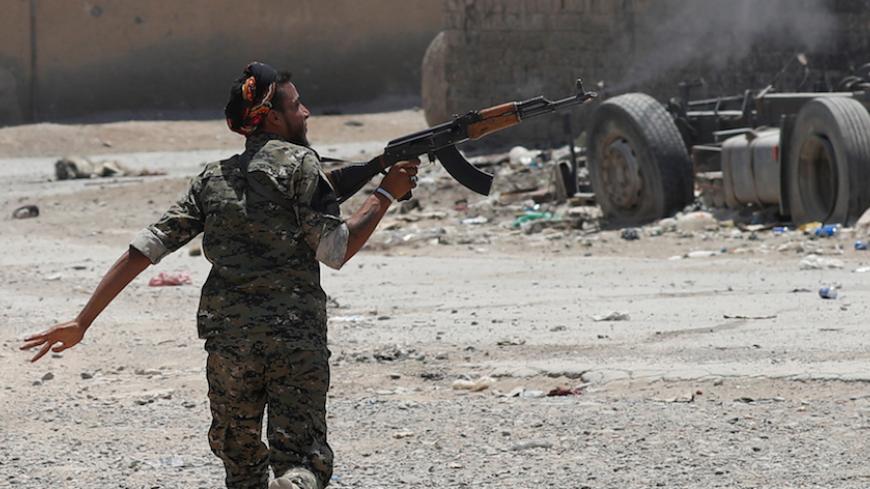 A Kurdish fighter from the People's Protection Units fires his rifle at Islamic State militants as he runs across a street in Raqqa, Syria, July 3, 2017. - REUTERS/Goran Tomasevic

US-backed Syrian rebels are suffering heavy casualties as they attempt to retake the Islamic State (IS) stronghold of Raqqa from fighters lodged in tunnels, trenches and other defensive positions, the Pentagon said today.

Despite stiff resistance from improvised explosive devices, car bombs and even drones, the Syrian Democratic Forces (SDF) have now entered the Old City of Raqqa, breaking through a seventh-century wall laden with explosives where IS has been holding out. The contingent of Arab and Kurdish soldiers number between 30,000 and 40,000.

Pentagon spokesman Jeff Davis said casualty numbers are “absolutely” rising in the ongoing battle, now in its sixth week. The Defense Department did not provide any figures behind the loss assessment.

Despite continued losses, Davis said that the Syrian effort to dislodge IS would be sustainable over the long haul. This effort is set to receive an infusion of weapons, vehicles and tactical military gear in the Senate’s new defense spending bill.

“We knew that Raqqa was going to be very hard,” Davis said. “It’s a stop-and-go effort by its very nature.”

Nearly two dozen airstrikes launched by the US-led coalition in Syria have helped the SDF offset sniper fire and IEDs to take nearly a square mile of ground, including a high-rise complex, in a three-pronged advance over the weekend.

Anti-IS troops are advancing from three separate areas, including two pushes along the Euphrates River and in another northern drive toward the Old City. The London-based Syrian Observatory for Human Rights estimates that the US-led coalition has liberated about 35% of the city.

Davis said US troops stationed nearby haven’t had any recent problems with pro-regime forces thanks to the de-escalation hotline with the Russians. American troops are primarily stationed in Syria in an active advisory capacity, as the SDF pushes forward into the Old City, which is IS' primary enclave in Raqqa.

But Davis said today that US troops in the region can “often find themselves in a situation where they’re going to have to be on the defensive” and respond with force to IS attacks.

The uptick in airstrikes and SDF casualties comes with news over the weekend that IS leader Abu Bakr al-Baghdadi, who was previously reported dead, may still be alive. On Sunday, Lahur Talabany, a leading Kurdish intelligence official in Iraq, told Reuters he believes the leader of the self-proclaimed caliphate was still alive in Raqqa.

But Pentagon officials, who have so far refused to confirm reporting on Baghdadi’s status, believe he is no longer a major figure when it comes to the fight in Iraq and Syria.

by Murielle KASPRZAK and Joseph SCHMID | AFP | May 26, 2022
END_OF_DOCUMENT_TOKEN_TO_BE_REPLACED