Activists and scientists are increasingly concerned about water pollution in Lebanon and request action from the government, which has not acted on the urgent situation so far. 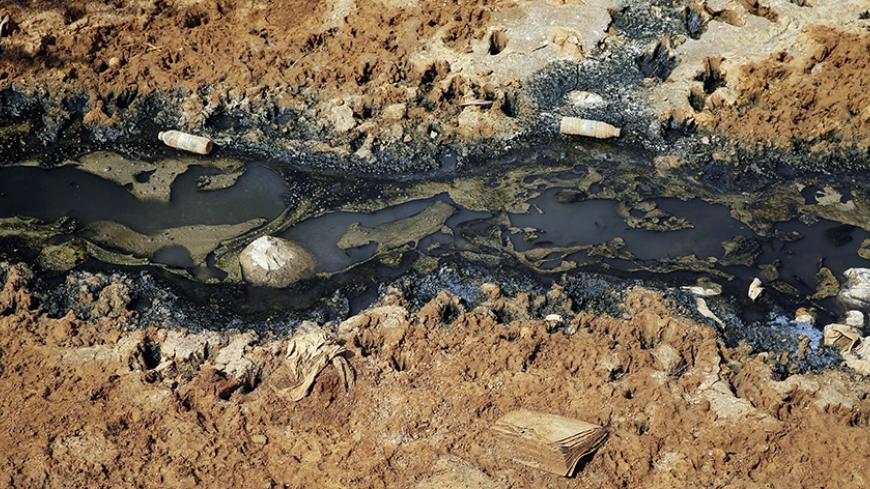 Lebanese TV network LBCI published a picture June 19 showing a large polluted area along the coastline of Beirut, which then quickly appeared on Lebanese social media networks. A video shared June 1 by the Lebanese Transparency Association, a nongovernmental organization fighting corruption, also showed how badly polluted the water is a few meters below the surface. Although this problem is not new, it seems to reach a new level every year, polluting even underground currents.

“The world’s most beautiful pollution” — that's how blogger Claude El Khal referred to the coastal waters of Lebanon on his blog after LBCI shared the picture of a brown-colored area in the sea, close to the shore where people usually enjoy a swim in summer. Already in 2002, university student Lena Kakati warned on the Planetary Notions website, a global student platform that addresses topics of environmental importance, “Our natural waste greatly harms our health.”

She wrote, “A cycle forms when we dump our wastes in the water: Fish find it and eat it, and then people catch the fish to have for dinner.”

Since then, nothing seems to have changed, and since the garbage crisis in the summer of 2015 things have only gotten worse. Starting in early June, activists have shared pictures of trucks going from Burj Hammoud, north of Beirut, to the sea to dump trash there. Minister of Environment Tarek al-Khatib said June 13 that as per the contract between the contractor and the Council for Development and Reconstruction, the garbage is to be thrown in the sea.

But the main reason for water pollution in Lebanon is the untreated sewage. “In the last 20 years, the Lebanese government spent more than $1.5 billion in loans to put in place a water sanitation system,” economist and social activist Jad Chaaban told Al-Monitor.

“It worked in some places but not in Tripoli, Beirut and Batroun at least. The water sanitation stations are just not connected to the sewage network, so the sewage ends up being thrown [without treatment],” he said.

“Pollution also originates from factories that are located near the seaside and that throw chemicals in the sea, and from dumps placed along the seaside in places such as Tyre, Beirut and Tripoli,” Chaaban said. For him, all of this is happening because of “a total lack of governance and a high corruption level. The European Union gives loans to Lebanon, and then the only entity controlling what is done with the loan is the Council for Development and Reconstruction. No independent organization checks what is done with this money — it is a political problem.”

Some private entities, like the Advanced BMI Weight Loss Center, have even speculated on the reasons for the water pollution and have warned citizens to stay away from the seaside. No data can be found to confirm the center's information, as the National Council for Scientific Research, which studies water quality all year round, did not respond to a request for comment and their publications are private.

In regard to the consequences stemming from water pollution, Chaaban said, “We see a decline in fisheries and the marine ecosystem, which pushes us to import fish instead. [We also note] a decline in tourism and infiltration of the cities’ underwater system, which means this pollution will end up reaching our households.”

“In this case, Lebanon is in clear violation of the Barcelona Convention,” which Lebanon is a signatory of, he added. “It is time the EU stop funding Lebanon for looking after its environment and for our leaders to take real decisions. Nobody can sit on problems like this forever.”

But seawater is not the only water affected by pollution in Lebanon. “We face a major pollution problem — in particular [affecting] the main sources of wells, drinking water and rivers,” said Nada Nehme, who has a doctoral degree in geosciences from the Lebanese University, where she works at the faculty of agricultural science.

“I think especially about the Litani River. All these sources of water are contaminated by microbiological and dangerous chemical agents, which develop every year without a solution. Waste and muddy water are [some of] the causes of pollution, as well as encroachment on public spaces through tourist activities, the presence of restaurants on river banks and the use of pesticides,” Nehme told Al-Monitor.

Safaa Baydoun, a researcher on water science at Beirut Arab University who worked as a researcher on the Litani River, Lake Qaraoun and the upper Litani Basin (groundwater), shared some of her research results with Al-Monitor. “Significant spatial differences have been found between different sites of the Litani River, with the upper Litani exhibiting high levels of dissolved salts, very low levels of dissolved oxygen necessary for the river's aquatic life and very high levels of toxic ammonia and phosphates exceeding by many folds the criteria for short- or long-term exposure in healthy water bodies,” Baydoun said.

She added, “High levels of organic pollutants are also found. Domestic sewage and the overuse of fertilizers by farmers accompanied by runoffs are the underlying causes for the high levels of pollutants. This increased availability of nitrogen and phosphorus can cause excessive growth of algae, which in turn can disrupt the aquatic biological equilibrium leading to the oxygen depletion death of fish and amphibians and a drop in the biodiversity of aquatic plants. This phenomenon is called eutrophication. Better water quality conditions are found in the lower river, possibly due to the role of Lake Qaraoun in reducing the eutrophication level and the role of tributaries in diluting the contamination levels.”

Concerning the quality of water studied in 20 wells across the country, Baydoun said, “Even though less alarming than the general pollution of surface water in the basin, these results clearly show that groundwater quality is also deteriorating.”

She noted, “It is very important that long-term monitoring of groundwater quality is conducted and the Lebanese government should address the governance problem of the water quality sector involving stakeholders at all levels."

Without this involvement, the health of Lebanese people is directly threatened. “Since 2005, the national epidemiological surveillance program at the Ministry of Public Health has registered significant increasing trends in notifiable water and foodborne diseases,” Baydoun said.

She continued: “In the Bekaa Valley 243 cases were recorded in 2005, 281 cases in 2010, 2,068 cases in 2014 and 909 cases in 2016 — compared to 45, 112, 122 and 74 cases, respectively, in Beirut during the same periods. More specifically, the recent assessment of the EU-funded Sustainable Water Integrated Management project in the Litani Basin on the prevalence of mortality due to diarrhea caused by poor water and water quality degradation estimates that there are 0.3 cases of deaths on 13 newborns per 1,000 inhabitants in 2012.”

While more activists and scientists voice their concern and request action from the government, this urgent issue still awaits a proper response from the authorities.