Lake Qaraoun suffers from industrial pollution from the factories on its banks and agricultural pesticides and no project, local or international, seems to stop it. 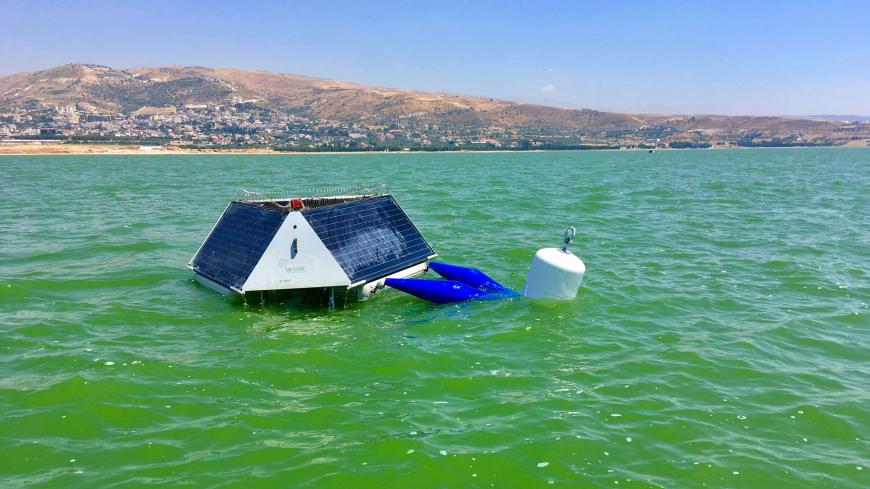 An instrument for algae monitoring and ultrasonic algae control is seen in Lake Qaraoun, Lebanon, seen in a picture uploaded July 23, 2019. - Twitter/@WorldWaternet

The sight of Lake Qaraoun, one of the largest artificial lakes in Lebanon, turning green has alarmed the villagers of the western and southern Bekaa Valley who rely on its waters for irrigating their fruits, vegetables and wheat crops.

The lake, created in 1959, suffers from industrial pollution from the factories on its banks, as well as medical waste such as bags of vaccines and needles, and agricultural pesticides. This is why the Litani River Authority launched a floating platforms project in Lake Qaraoun in 2018 to combat toxins in the water and limit the growth of harmful algae, but it did not end the pollution. The project was implemented with a $400,000 donation from the Netherlands. Previously, the Council for Development and Reconstruction oversaw the Lake Qaraoun Pollution Prevention Project, but the cleanup efforts of the Litani Basin were not enough.

The lake, which is also used for the generation of electricity, started turning green in July.

The change of color is caused by the increase of cyanobacteria in the lake, a bacteria that damages marine life, affects fisheries and causes skin diseases and liver cancer, Kamal Salim, a researcher at the National Council for Scientific Research and professor at the Lebanese University, told Al-Monitor.

He explained that the lake contains rainwater, sewage and industrial pollutants and the water’s color started to change as the temperature rose to over 30 degrees Celsius (86 degrees Fahrenheit) in July, making this freshwater source a fertile environment for cyanobacteria. Salim's own research, a copy of which Al-Monitor obtained, suggests that so far 30 species of fish in the lake have died.

Salim stressed that there is no effective solution to the pollution in the lake if the flow of sewage and industrial waste continues.

Maha Krayem, professor at the Lebanese International University in the Bekaa Valley specialized in plant physiology and ecotoxicology, told Al-Monitor, “We will see this green color in Lake Qaraoun throughout the entire summer if there is no solution for the source of the pollution.”

Krayem began her research on the lake and environmental pollution in 2011 and presented scientific research on the dynamics of the surge of cyanobacteria in Lake Qaraoun while studying for her master’s degree at the Lebanese University. She said that back then, the Litani River Authority, which is responsible for the lake, emptied Lake Qaraoun in order to resume a cleanup, a step whose effects on biological life and chemical changes to the lake water she studied.

Krayem explained that Lake Qaraoun turned green in 2011 as cyanobacteria spread due to the heat wave that hit Lebanon, but the bacteria’s spread was limited at the time. But the increase in pollution in 2019, coupled with rising temperatures and increased rainfall, led to the resurgence of these dangerous bacteria.

She noted that the same scene is repeating itself today following the hot weather in July, in addition to the ample presence of nitrate and phosphate that promote the growth of cyanobacteria.

Krayem warned against the dangerous toxins the bacteria produces and the effect it has on the nervous system and liver, in addition to causing skin allergies for those who come in contact with the water. She advised against going close to the lake, let alone going for a swim or catching fish, which the public are warned not to do.

She noted that the solution starts with reducing the amount of nitrate and phosphate in the lake, through the growth of wastewater treatment plants and forcing factories to install industrial waste filters.

Sami Alawieh, head of the Litani River Authority, told Al-Monitor that the lake's pollution levels aren't as high this year compared to previous years, given the increase in water quantities. He explained that Lake Qaraoun had contained 80 million cubic meters (21,000 gallons) in July 2018, but now the quantity exceeds 190 million cubic meters (50,000 gallons), due to increased rainfall in 2019.

He added, however, that a great deal of sewage and industrial waste has ended up in the river. The sewage flow continues from the springs west of the city of Baalbek through the districts of Baalbek and Zahle and the western Bekaa Valley, to the lake, passing through hundreds of refugee camps for displaced Syrians in some 69 Lebanese towns, as well as some food factories and industrial plants. Alawieh noted that this leads to the flow of a million cubic meters of sewage throughout the year.

In addition, he said that fertilizers and pesticides are smuggled into the country from neighboring countries, adding that there is no control over how farmers use them, so they end up penetrating the soil and making their way into the waters of the Litani River or directly into Lake Qaraoun, increasing the presence of cyanobacteria.

Alawieh pointed out that some experts believe the water must be treated in the lake to reduce pollution. He said, “We have seen that the treatment of water in the lake with the continued flow of sewage is a waste of money and time. The problem must be nipped in the bud; pollution must be eliminated by preventing infringements and putting an end to contaminants and wastewater making their way into Lake Qaraoun. It is only when pollutants no longer exist that a solution can be found, namely for cyanobacteria.”

He stressed the need to establish refineries in towns on the banks of the Litani River, namely in Qab Elias and Tamin, and fix those in Ferzol, Ablah and Iaat, as well as put an end to the smuggling and the use of harmful agricultural pesticides.

Alawieh said that the World Bank allocated a $55 million loan to tackle the lake’s problem, including the construction of a refinery and a sewage network in Zahle.

Meanwhile, Minister of Industry Wael Abu Faour, who is seeking to eliminate industrial pollution by the end of this summer, told Al-Monitor that he is carrying on with his anti-pollution campaign on the banks of the Litani River and underlined the area’s importance when it comes to ecotourism.

He pointed out that the Ministry of Industry has given a deadline to the 800 factories around the Litani Basin to meet the necessary conditions to reduce pollution, and that 80% of the factories have complied with the requirements.

Abu Faour noted that the deadline of six months had expired for the factories of petrochemical industries, foodstuffs and building materials, warning them that they would be shut down if they did not comply.