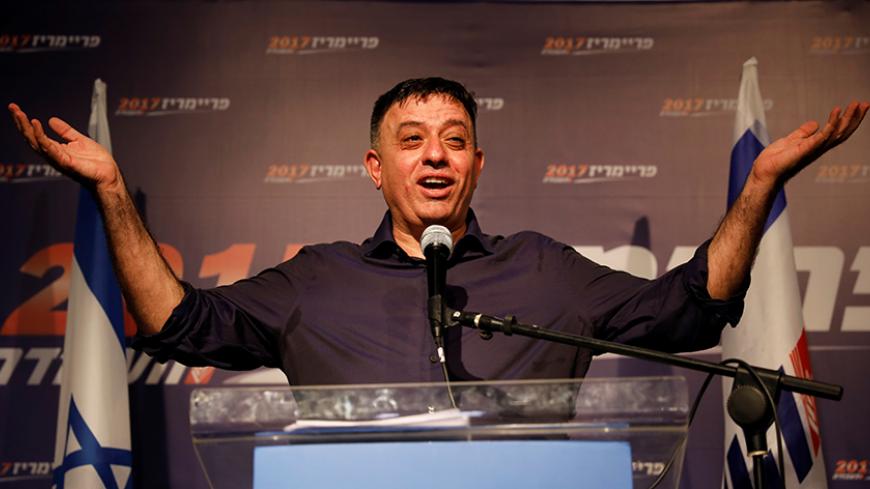 In August 2008, Defense Minister Ehud Barak prepared himself for the possibility of early elections. As the Labor Party's candidate for prime minister, his campaign focused on his proven experience in statesmanship and security matters as a former chief of staff, minister and prime minister. It was designed to impede the rising popularity of Foreign Minister Tzipi Livni, who was running a campaign to head the Kadima Party and ultimately run for prime minister herself.

One of the most memorable slogans of that campaign was, "Who is apt to pick up the [emergency] phone at 3 a.m.?" Barak used rallies, parlor meetings and interviews to explain that a country faced with the complex problems of Israel does not have the privilege of letting someone lacking basic experience to stand at its helm. "This is not some episode of the ‘X Factor,’ ‘Dancing with the Stars’ or ‘Survivor.’ We are a ship cast about on a stormy sea, and we need someone to guide us to safe shores. … In situations such as these, a thoughtful people does not start to experiment. … If there really is a tempest at sea, you choose an experienced captain."

Almost a decade has passed since then. Peace is yet to come, and the threats to Israel's security are as viable and real as ever. But it seems that Barak no longer believes that experience is as critical, as he spent the past few weeks beside former Minister Avi Gabbay as Gabbay ran for leader of the Labor Party. Then, on July 10, when Barak's gamble paid off with Gabbay winning the runoff, Barak took to the social networks to celebrate. What about Gabbay's having no experience whatsoever in dealing with the very issues Barak described as critical? As a member of the Knesset, Gabbay never served on the Foreign Affairs and Defense Committee. He never sat in a room where life and death decisions were being made, quite literally, with all that that entails.

Then what does Barak see in Gabbay? You can rely on Barak to see in the new leader a chance for Barak himself to lead the country again. Since Gabbay's inexperience will only highlight Barak's own strengths, Barak will work behind the scenes to weaken the fresh new Labor chairman in a way that makes Barak stand out as the right person to lead the center-left camp in this difficult time.

Barak will not have to make much of an effort either. Gabbay's inexperience will rise to the forefront over the next few days and will not disappear from the agenda until the next election. Anyone who sees him as a rival will have an easy time going after him, whether it is Prime Minister Benjamin Netanyahu and the Likud, Yesh Atid Chairman Yair Lapid, who has already accumulated seniority and experience as a finance minister and member of the security Cabinet, and above all else, incumbent Kulanu Chairman and Finance Minister Moshe Kahlon.

Kahlon gave Gabbay the ticket that got him into politics in the first place when he appointed him director general of his Kulanu Party before the 2015 election. That experiment ended in misery. Just a few months before the election, Kahlon concluded that Gabbay was not up to the task. The party wasn't ready yet, so Kahlon gently repositioned his appointee away from the front lines. While it is true that Kahlon chose him as environment protection minister after the election, he no longer shared party decisions with Gabbay and, in general, kept him at a distance.

In May 2016, less than a year and a half after the election, Gabbay resigned from the government, giving the removal of Moshe Ya'alon as defense minister and his replacement with Avigdor Liberman as his excuse. Kahlon felt betrayed, and rightfully so. It can be assumed that the day will come when he will start attacking Gabbay by explaining to the voters that the new Labor chairman is little more than an imitation of him, and that it is always better to vote for the original.

Gabbay's personal achievement should not be understated. He just won a huge victory, which breathed new life into the party. Gabbay not only defeated former party Chairman and Defense Minister Amir Peretz, he also beat the party establishment, the Histadrut labor federation (which unofficially backed Peretz), and all of the party's old guard, including its chairman, Isaac Herzog, and Knesset member Erel Margalit.

Labor members voted for Gabbay out of desperation. They have been out of power for years, and they spent all that time serving either as a crutch for various Likud governments or drying up in the opposition. They tried almost everything in the last decade — choosing Peretz, bringing Barak back, crowning Shelly Yachimovich, and then giving Herzog a chance and allowing him to join forces with Hatnua Party head Livni. Nevertheless, the reins of government only grew more distant. The fact that they elected someone who wasn't even a member of their party seven months ago, whose identification with the party and its agenda didn't exist at all, and a businessman who did not stand out as a minister is evidence that they have lost their way and are searching for an identity.

Gabbay defeated Peretz by a 1,346 vote margin: He won 16,080 votes to Peretz's 14,734. In other words, just 30,000 voters determined the result. This skimpy electorate says something about the party's sad state. It shows how unattractive it has become. Despite the euphoric mood yesterday, the Labor Party still does not offer an alternative to take over the government. It does not offer that vaunted alternative under Gabbay, nor would it have offered it if Peretz has been elected party leader.

When the issues of his diplomatic and security inexperience are raised, comparisons between him and US President Donald Trump will be found irrelevant to the situation in Israel. Nor has Trump proved himself a success yet. If, however, the paradigm is Israel, the value of experience has been proven beyond any shadow of a doubt.

Yitzhak Rabin's (Labor) first term as prime minister (1974-77) was marked by unpreparedness and a lack of focus, even though he had already served as a minister and chief of staff. When he returned to power two decades later (1992), he proved to be a highly prepared and focused leader, who knew exactly what he wanted to do about the conflict with the Palestinians.

Ariel Sharon (Likud) was already in his eighth decade when he was elected prime minister in 2001. It came after many long years in the opposition and his failures and eventual removal as defense minister. His past was evident in everything he did. When he led the country during the dark days of the second intifada and then through the disengagement from the Gaza Strip in 2005, he acted out of inner strength. His seniority and experience granted him validity as a leader.

Gabbay has plenty of ambition. He says that he can win 20 seats, bring about a peace agreement, show preference for the impoverished southern city Dimona over West Bank settlement Amona and restore hope. But these are all empty statements with nothing to back them up. Gabbay may have been a good manager at the Bezek phone company, and he may have gotten rich, but he has yet to prove that he can do much besides instilling a new mood in the party. He must prove that he can really pick up the phone at 3 a.m. Either that or he would need Barak by his side.