Victories put Iranian Reformists on path to repeat past failures

Consecutive electoral victories are giving rise to infighting in the Reformist camp. 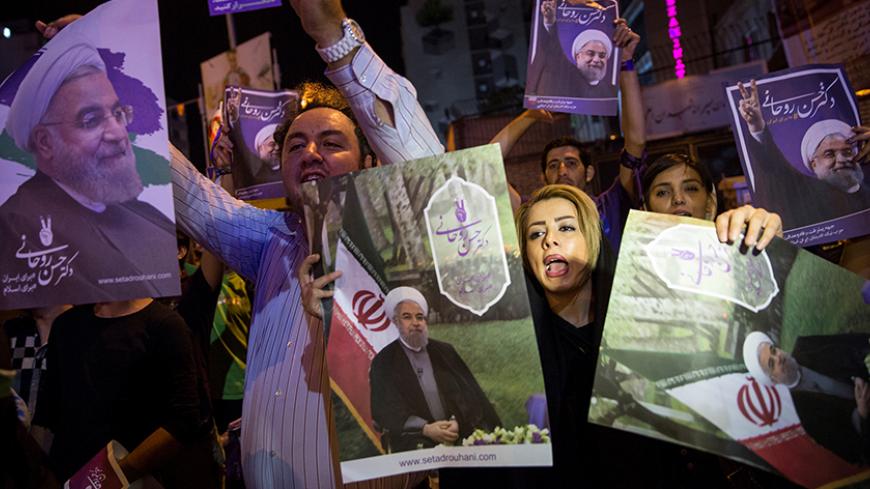 Supporters of Iranian President Hassan Rouhani hold his posters during a campaign rally in Tehran, May 17, 2017. - TIMA via Reuters

TEHRAN, Iran — It has become customary for Iran’s Reformists to unite in the face of defeat and to attack one another in times of success. With their rivals vanquished in consecutive victories in presidential, parliamentary and city council elections, differences within the Reformist camp are being highlighted, as occurred under Reformist President Mohammad Khatami (1997-2005).

Ahead of the 2016 parliamentary elections, the Reform movement decided to organize not merely under the Reformist Front Coordination Council, which coordinates among the various groups and factions, but under a new Supreme Council for Policymaking, which oversees the latter and consists of the heads of Reformist organizations and Khatami advisers.

The Reformists employed the same approach in the presidential as well as concurrent city and village council elections last May, although the Supreme Council was initially envisioned to sit only for the parliamentary elections. Instead, it continued, with a few adjustments, including increasing the number of council members and allocating seats to new Reformists. The council is where the Reformists’ internal differences began.

Critics said the council's activities meant that the parties played a less prominent role and certain influential figures were allowed to make decisions for the entire Reform movement. Among the critics who believed individuals should not act in place of parties were prominent Reformist clerics Hadi Khamenei, secretary-general of the Assembly of the Forces of the Imam's Line; Rasoul Montakhab-nia, deputy head of the Etemad-e Melli Party; and Mohsen Rahami, secretary-general of the Islamic Association of University Teachers. These three clerics saw the council’s mission as accomplished after the parliamentary elections and therefore stopped attending its meetings.

The situation devolved after the Reformists released their List of Hope, the ticket of candidates for the city and village council elections. The ticket sparked a wave of criticism on social media and among some Reformist organizations, especially since many prominent Reformists were not included on it. There was also talk of behind-the-scenes “rents” being paid as well as lobbying to add certain names to the list and eliminate others. That different versions of the ticket were being released also led some Reformists to think that Khatami, the spiritual head of the Reform movement, would not approve it.

On May 15, however, Khatami issued an official statement asking his supporters to vote for everyone on the list. Unlike for the 2016 parliamentary elections, he did not release a message on video. This led to speculation among Reformists that Khatami’s statement may have been made under pressure and that deep down, he did not want to support a controversial list from the Supreme Council for Policymaking, led by parliamentarian Mohammad Reza Aref.

Despite the controversy, the Reformists won all the seats on the Tehran City Council. The victory did not, however, end rumors about alleged behind-the-scenes payments and the composition of the list. Aref in particular became the target of a wave of criticism, given his leadership of the Supreme Council.

Accusations persisted that individuals had been added to the Reformist ticket through the back door and that the Supreme Council had received hefty sums totaling some 20 billion rials ($615,384) to include names on the list. In a May 28 interview later refuted, Fatemeh Daneshvar, a former Reformist member of the Tehran City Council, said she had been asked for 20 billion rials and was removed from the ticket after refusing to pay it. Meanwhile, on June 6, the daily Aftab-e Yazd wrote on its Telegram channel that some prominent secretaries-general of Reformist parties had requested the amount from various individuals.

Aref dismissed all such claims on June 25, but the calls continued for transparency in regard to the List of Hope. In a June 25 interview with Khabaronline, Rasoul Montakhab-nia, former parliamentarian and deputy head of Etemad-e Melli, said, “The Reformists Supreme Council for Policymaking is a symbol of dictatorship and this council must be dissolved.”

A member of Khatami’s advisory council speaking on condition of anonymity told Al-Monitor, “The reality is that parties have divided the council seats among themselves. The Executives of Construction Party and figures close to Mohammad Reza Aref were decisive in this regard. This resulted in the more established Reform parties remaining on the sidelines. The main reason for this problem is Mohammad Reza Aref’s ineffectiveness and also totalitarianism, which the Executives of Construction Party, led by Gholamhossein Karbaschi, had also been challenged with.”

Aref — whose actions are under the radar more than any other Reformist politician — managed to cause even more controversy. At a July 14 press conference, he criticized Rouhani, saying, “After victory, some people forget who worked hard for them. Rouhani owes his victory to the Reformists and should consult with them on introducing a Cabinet line-up [for his second term].”

Aref's remarks elicited varied reactions from Reformists. Those who were not pleased with his performance in parliament or his introducing the ticket for the Tehran City Council elections openly attacked him. Abdollah Nasseri, a prominent Reformist, said in a July 14 interview that no one, Reformist or Principlist, had the right to ask for a share from Rouhani.

Tehran University professor Sadegh Zibakalam told Al-Monitor, “Asking Rouhani for a share and saying that his victory is owed to this or that is not a correct approach. This is not to mention that it will ignite differences within the Reform movement, which is not good at all, as we have experienced these bitter differences in previous decades.”

Regardless of the fears and hopes expressed by Reformists about their internal differences, it seems that their consecutive victories in the parliamentary, presidential, and city and village council elections have given them an immense level of confidence, but now that there are no Principlists on the stage, they have turned to competing among themselves. Such a development could lead to a repeat of Khatami’s final years in office and thus herald the beginning of successive electoral defeats.