Hamas' security forces in Gaza have prevented Fatah figures from traveling to the West Bank in what observers say is the movement lashing out at President Mahmoud Abbas’ escalating measures against the Gaza Strip. 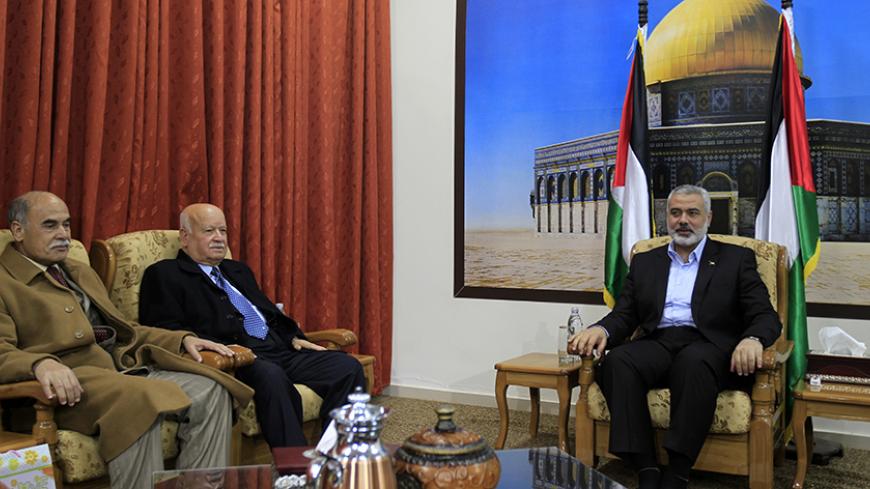 Several Fatah leaders loyal to President Mahmoud Abbas have been prevented from traveling to the West Bank to attend meetings recently. Hamas' security forces in the Gaza Strip prevented the deputy secretary of Fatah's Revolutionary Council, Fayez Abu Eita, from traveling to the West Bank on July 11 through the Beit Hanoun/Erez checkpoint to attend a Fatah meeting. No justification was given.

On June 30, Hamas security prevented Fatah Central Committee member Ahmad Halas from crossing the checkpoint. Member of the PLO’s Executive Committee and head of its Department of Refugee Affairs, Zakaria al-Agha, was turned back twice, on May 19 and 30.

Abu Eita told Al-Monitor that he went to the Beit Hanoun checkpoint on July 11, but was shocked to find out that he would not be allowed to go to the West Bank. “The Hamas security forces at the checkpoint prevented me from passing without giving any justification. This completely violates Palestinian laws,” he said.

A Fatah official told Al-Monitor on condition of anonymity that the Hamas political leadership had decided to prevent Fatah leaders from going to the West Bank. He attributed the move to the ongoing bickering between the two movements, explaining, “Hamas wants to tighten the noose on the Fatah leadership in the Gaza Strip by continuing to prevent Fatah leaders from traveling to the West Bank, as it did with Halas and Abu Eita. This comes in light of the escalation between the two movements after Hamas rejected Fatah’s request to end the administrative committee that Hamas formed in March in the Gaza Strip.”

He said that such measures can also be credited to Hamas' belief that the problems in Gaza, such as the electricity crisis, will soon subside after the understandings reached in Cairo with dismissed Fatah leader Mohammed Dahlan that resulted in Egyptian industrial diesel flowing into the Strip in early July. Hamas has also been harassing close associates of Abbas since he took a series of measures to sanction the rival movement.

Al-Monitor tried to contact Hamas' Ministry of Interior and some of the movement's leaders for comment, but to no avail.

Akram Atallah, a political writer for the local Al-Ayyam newspaper, concurred with the Fatah source. He told Al-Monitor that Hamas is taking escalatory measures against Fatah and the Palestinian Authority in the West Bank because it now feels more powerful after the Hamas-Dahlan understandings.

Atallah noted that Palestinians are antagonizing one another in light of the division and chaos as well as the punitive measures taken by each party, all of which violate the Palestinian Basic Law as well as the natural rights of citizens.

He said, “The whole point of such measures is to pressure the PA to put an end to its own actions, such as the suspension of the salaries of members of the Palestinian Legislative Council for Hamas in the West Bank. In response, Hamas is preventing Fatah leaders from traveling through the crossings. … Such actions are undoubtedly inappropriate coming from parties and political forces.”

Lawyer Bakr Turkmani, the coordinator of investigations and complaints in the Independent Commission for Human Rights (ICHR) in Gaza, told Al-Monitor that no citizen should be prevented from exercising their right to travel and noted that any action to do so must be made by court order. He called on Hamas to retract its decision and allow Fatah leaders to travel again.

He added, “According to the ICHR’s information, security forces stationed at the Beit Hanoun checkpoint prevented Fatah leader Abu Eita from traveling to Ramallah. Before him, Fatah leaders Agha and Halas were not allowed to attend Fatah meetings. We were told this only regards them [personally], which means there should be a clear court order for the travel ban.”

Turkmani stressed that the ICHR’s position is clear: Freedom of movement is a right guaranteed by domestic and international laws, and travel bans violate fundamental rights. “The Palestinian Basic Law clearly stipulates the right of freedom of movement for Palestinians. This right should not be restricted except by a court order, not a political or administrative decision,” he noted.

It seems that Abbas’ recent measures against the Gaza Strip, such as cancelling medical travel passes for Palestinians in Gaza, played an important role in straining the atmosphere between Hamas and pro-Abbas Fatah leaders, prompting each party to strong-arm the other.