The Gaza Municipality has increased rent for the land used to set up beach resorts every summer, forcing many lodge owners to condense their facilities or close altogether. 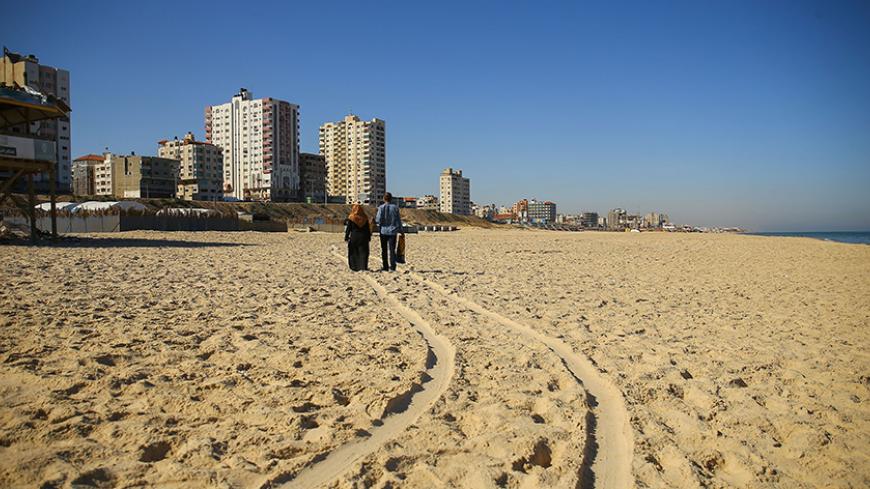 GAZA CITY, Gaza Strip — The owners of beach resorts on the coast of the Gaza Strip are complaining that the municipalities have increased the rental prices for land along the coast. Temporary vacation lodges are built there each summer, offering a rare escape for citizens from the summer heat and power outages that have reached 20 hours per day.

At the start of this summer season, the largest municipality in the Strip, the Municipality of Gaza, set rent for resort owners at $35,000 for the summer season, which starts in early May and ends at the end of October. The amount is very high compared to what the municipalities charged under the Palestinian Authority before 2007, according to Hatem al-Sheikh Khalil, the director of the Public Relations Department in the Municipality of Gaza. The fees at the time did not exceed $2,000 for the entire summer.

The beach resorts are temporary wooden structures built directly on the shores, their palm-thatched roofs covering the bare ground in units of 30 by 60 meters (100 by 200 feet). The lodges offer tents made of fabric and palm branches as well as tables and umbrellas for rent.

Khalil told Al-Monitor there is only one lodge this year on this municipality's beach. There were four last year and 18 before Hamas took control of Gaza in 2007.

The only remaining lodge is called the “Ghoroub, Houssam, Alaa and Marina Resort.” The name combines those of four distinct resorts that had operated separately in previous years. Their owners decided to merge them this year to afford the expenses imposed by the municipality.

Shareholder Ramadan Malaka told Al-Monitor, “The increase in the rental prices of a coastal piece of land has wrecked the summer season and led to soaring prices of services offered to vacationers like umbrellas, food and drinks.” He sees the increase of rental prices as part of Hamas’ efforts to collect more money from citizens during the financial crisis plaguing Gaza.

Mohammad Naim took his family for a summer vacation on the beach, but chose to brave the summer heat rather than rent a tent on the beach due to its high price.

Naim told Al-Monitor, “During the summers in previous years, I would camp with my family for several days in these lodges. But this year, the vacation season is at its worst. I only went to the resort once due to the high prices. I prefer to spend my vacation on the open beach, without renting a tent or an umbrella to protect us from the sun.”

The beach vacation industry once offered Gaza's unemployed youth dozens of job opportunities. But after the municipalities increased the rental prices, the jobs fell off, as did the wages.

Khalil said that the municipality raised rents so it can pay its 80 employees in charge of cleaning the beaches after the vacationers leave. Each of those employees receive a monthly salary of 1,400 shekels ($394).

Khalil does not believe the prices are the only factor the resorts are dwindling and fewer Gazans are vacationing there. He pointed out that another important issue is the sea pollution, with sewage contaminating 73% of Gaza's beaches, in addition to the power outages, both of which have discouraged vacationers.

He added, “The municipality only pumps sewage onto the beach and ruins people’s good time. It has wrecked the summer season for resort owners.”

He noted that the fee that resorts pay to municipalities does not include expenses like water and electricity in Gaza, where the power outages are constant. Kurd said that he pays an extra 500 shekels ($140) a day to supply water and buy the fuel needed to run generators.