Gaza’s beach is a respite from the heat and power outages, but also a microcosm of Gaza’s challenges. 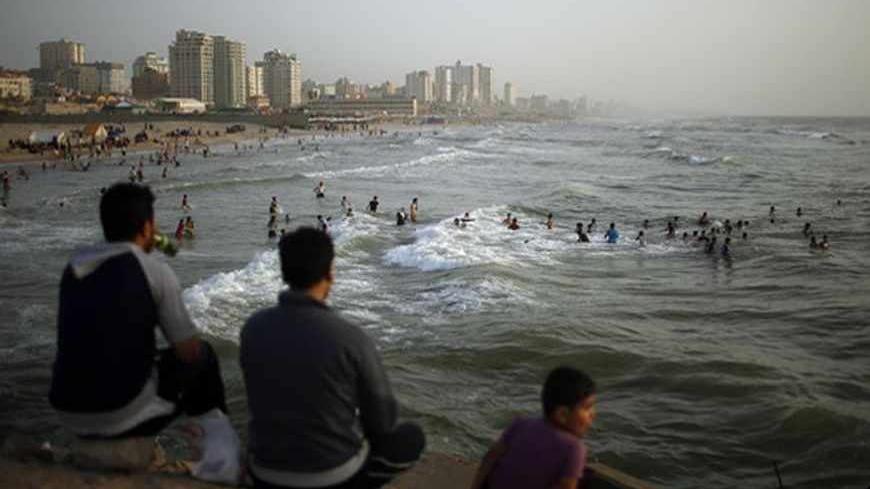 Palestinians enjoy the warm weather at a beach in Gaza City, May 31, 2013. - REUTERS/Mohammed Salem

As summer arrived, the inhabitants of the Gaza Strip — who number around 1.7 million — found in the sea an avenue to escape from the summer heat and electricity outages.

Thousands of men and children on vacation swam or lay on the beach, while most women sat carefully or swam in their black abayas. Every now and then, the scene was broken by the passage of a horse or camel to lure people into taking a ride for less than $1.

Ibrahim, 20, rode his camel from the Mughraqa region of the Gaza Strip toward the shore, which takes about an hour, to earn a daily income that does not exceed $15. Speaking to Al-Monitor while looking around for potential customers, he said, “The summer season continues until Ramadan (due to start on July 9). Because they are fasting, people don’t come to the beach much, and summer goes by quickly. During this time of the year, nobody rides camels, so I will have to find another job in construction or sales.”

Ibrahim said that in the past he had a herd of camels, but the war in 2012 left him with only one. Two girls who seemed to be friends approached his camel, and Ibrahim helped them up onto the saddle. They cried out in fear when the camel stood up to walk, while one of them said, laughing, “I feel like I’m looking out from the third floor.”

Hares, 12, and Anis, 11, just came out of the water, reluctantly, after being stung by jellyfish.

“We want the lifeguards to get rid of the jellyfish because they are so annoying. I have stings all over my hands and legs,” said Hares, while extending his red arm.

Their relative, 39-year-old Mazen al-Shaer, was also there with three of his sons. He said, “We live close to the beach, and we believe it’s the only escape for the children. There are no clubs or places where they can spend their time.” Shaer also complained about the pollution on the beach.

Papers, empty cans and plastic bags are spread out on the shore, in a scene that completely distorts the general image of the beauty of a beach and sunset. There is also a stench that can be smelled from time to time, because the beach has become a sewage dump in several spots.

Unlike Hares and Anis, not all children come to enjoy themselves, as some of them have bigger responsibilities. For instance, 13-year-old Ahmad calls out “Anbar Anbar,” while approaching families sitting in chairs and others stretched out on the ground. He is trying to sell them “Anbar,” a Palestinian term for candied apples. Not many buy candied apples from him, since families believe that their high sugar content is harmful, not to mention the fact that it comes without a cover. Still, attracted by its flashy red color, some children insist on buying one.

Suddenly, a horse carriage makes its way between the people. Families cry out, while moving away from the man leading the horse and insulting him. Yet, he insists on steering clear of the water since it ruins the wheels of the carriage. Atop the carriage there is a stove he calls the “potato stove,” which is fueled by wood logs to grill potatoes. He calls out, “Sweet potatoes.”

While putting another potato on the stove, 21-year-old potato merchant Hatem al-Nounou told Al-Monitor, “The farmers sell us sweet potatoes for a high price. For this reason, we sell one potato for two or three Israeli shekels [$0.55-0.83]. Sales are very low these days, despite the fact that there are thousands of people on vacation, in addition to 12 potato merchants on the Gaza shores alone.”

Giving us a delicious piece of grilled sweet potato served on a newspaper page, Nounou wrapped up the conversation. He then left, insisting on making his way past the vacationers once again, thus pushing them to run in all directions for fear of being hit by his carriage.

Yet, horses, bad smells and filth are not the only things ruining the beach experience for vacationers. Alerted by the sound of an ambulance siren, people suddenly run to the same spot on the beach. “Someone drowned! Someone drowned!” people cried. At that moment, rumors start spreading. Some say that a child was taken under by the current, while others talk about a man who thought himself undefeatable but did not return from the sea. Others say a woman nearing the shore was dragged into the current. Whatever the story, the ending is rarely happy.

Yahya Tayeh, a mayor and head of the marine rescue department in the civil defense services, said that since the onset of this year, there have been seven deaths from drowning and over 400 rescue cases. He added that four deaths happened before the start of the summer season — which lasts from the beginning of June until the beginning of September — and three deaths were recorded during the summer. He confirmed that these deaths occurred before or after the lifeguards’ shifts, which start at 8 a.m. and end at 8 p.m.

In an interview with Al-Monitor at his office that overlooks the port, Tayeh mentioned that before the summer season there were 100 lifeguards, and the number increased to 360 during the season. He also asserted that they advise vacationers not to swim before 8 a.m. or after 8 p.m., but some do not listen. They also spread awareness and hang up banners telling people not to swim in spots where sewage is pumped or in dangerous rocky areas.

He also noted that there is an operations room to facilitate constant coordination between the civil defense services, the marine police and the relief team. They are prepared for any emergency. This is especially important amid an increased number of children going missing on the beach on Thursdays and Fridays, when the number of vacationers reach into the thousands. He also warned that they lacked rescue equipment such as lifeboats and life preservers.

Close to the beach, 18-year-old Khouloud al-Sarraj sat with a book in one hand while holding her little sister Hanane's hand with the other. She said that she came here in search of some calm and fresh air to study for her baccalaureate exams, after electricity service was cut.

Surrounded by two watermelons and some towels, 48-year-old Salem al-Dreimli sat with his family, comprising mostly women and girls, on plastic chairs. He said that while they love the sea, there is a lack of lighting and lifeguards on the shore at night. He also noted that most families — his own included — come to the beach after 8 p.m., when the lifeguards’ shift has ended.

Dreimli’s wife, Umm Saed, complained about pollution and noted that the families keep the place clean and put their waste in bags. The problem, however, is that there are no bins to throw the trash in.

Regarding the issue of cleanliness, Hatem al-Sheikh Khalil, head of public relations for the Gaza municipality, stated that the beach is cleaned in the early morning. He also noted that it is impossible to clean it while the families are there. He said that the massive number of vacationers has pushed the municipality to pay extra attention to completing Gaza’s corniche, which is costing more than $3.5 million and aims at reducing crowding on the beach.

Speaking to Al-Monitor, he said that every year they get ready for the season by preparing to offer vacationers leisure options. He clarified that in the past year they allowed 15 cafeterias to rent beach spots, as opposed to only seven this year. They want to leave wide spaces open for people to sit, especially amid the tough economic conditions.

Gaza’s shore is not only an escape for students, families and children but also for newlyweds such as Samar, 19, and Mohammad, 23, who found no better place than this to spend their honeymoon. They fight and laugh, while looking at the vast ocean, counting the days of their marriage and enjoying the sunset.