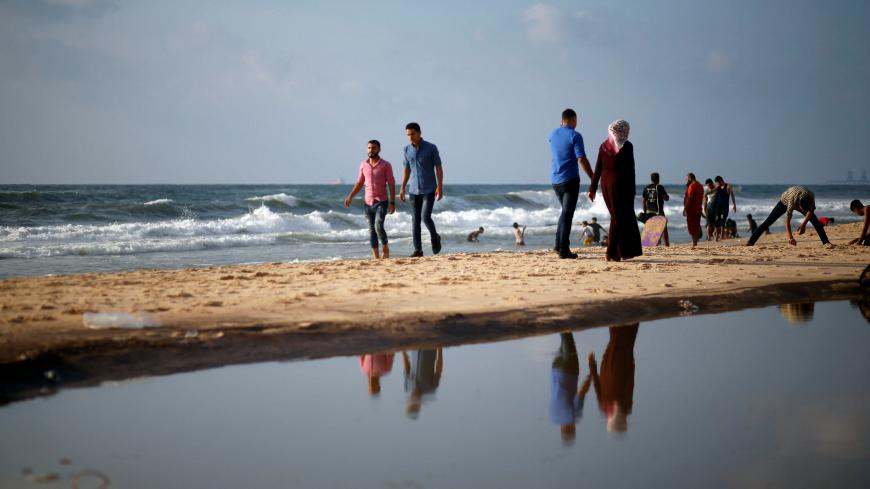 Palestinians walk past a pool of sewage on a beach in the northern Gaza Strip, July 13, 2018. - REUTERS/Mohammed Salem

The new project seeks to end pollution along the coast that untreated wastewater poured into the sea has caused since 2013, preventing the inhabitants of the Gaza Strip from going to the beach and swimming in the sea in the summer. The crisis came after the wastewater treatment plants stopped operating as power outages hit more than 12 hours a day before climaxing to 20 hours daily in May 2017.

The beach water-quality monitoring tests the Environment Quality Authority in the Gaza Strip conducted in April 2018 indicated that 75% of the 40-kilometer (25-mile) coast is polluted and unfit for swimming, with Gaza Strip municipalities dumping more than 115,000 square meters a day of untreated or partially treated wastewater into the sea, the Palestinian Alray news agency reported May 24, 2018.

Mohammad Thabet, the company's public relations director, said the project “would ensure that all 11 wastewater treatment plants in the Gaza Strip are supplied with power around the clock, in order to guarantee that untreated wastewater is not poured onto the Gaza beach.”

Khalil Abou Charekh, a resident of Beach Camp west of Gaza City and a father of seven, told Al-Monitor, “It has been three years since my family and I stopped going to the beach. The odor has been really bad and two of my children got infected with amoebiasis.” He added, “The beach was the primary source of pleasure and recreation for the residents. We had no other refuge to escape the summer heat.”

Abou Charekh also said, “The project, designed to ensure that wastewater is treated before it is poured onto the Gazan shore, has been a long-awaited dream that would bring summer fun back to the beaches.”

The director of the water and sanitation department in Gaza City municipality, Ramzi Ahl, told Al-Monitor, “Qatar's Gaza Reconstruction Committee allocated $4 million in funds to this project to ensure that all wastewater treatment plants in the Gaza Strip operate in a way that ends the problems along the Gazan coast.”

He said Qatari support to the Gaza power generation plant has resolved the majority of the environmental and basic services problems relating to the municipalities’ work.

The seawater pollution prevented Gazans from spending their summer at the beaches, and resulted in the building of many private dwellings on private agricultural lands where pools are filled with fresh underground water.

Nevertheless, these chalets are exclusive to well-off families that can afford paying an average daily rent ranging between 400-800 shekels ($110-$220). This is while most Gazan families can’t afford to pay such a sum, as the poverty rate in the Gaza Strip has reached 53%, according to the Palestinian Central Bureau of Statistics.

Alaa al-Kurd, owner of Al-Alaa cafe on the Gaza beach, decided to shut down his business in the summer of 2018 given the seawater pollution and ongoing decline in the number of beachgoers. Kurd told Al-Monitor, “The numbers of beachgoers have declined since summer 2013, because they cannot swim in the polluted water. Subsequently, our revenues dwindled since we bank on renting them tents and offering drinks and shisha” (hookah smoking).

He said, “This drop caused us to reduce the number of employees at the cafes from 30 to seven, and to dramatically reduce their monthly salaries from 1,200 to 700 shekels [$330 to $195].” He said the number of beach cafes in Gaza City dwindled from three in 2017 to zero in 2018; there were six beach cafes in 2016 and eight such establishments prior to the crisis.

Kurd said ensuring that the wastewater treatment plants operate and that untreated sewage is not dumped into the sea will revitalize the summer season, lift the number of beachgoers and subsequently reboot the beach cafes.

Ahl said the Gaza municipality, in conjunction with Qatar, seeks to ensure a safe summer free of pollution.