A film focusing on the January 25 Revolution produced in 2011, which was never screened in Egypt, is now stirring controversy after appearing online. 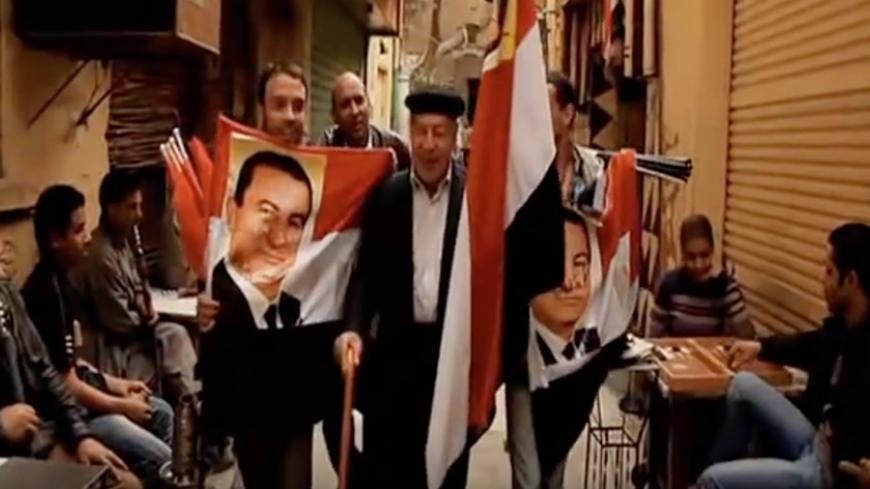 A still from the film "18 Days." - YouTube/TheFollifolli

CAIRO — “18 Days” is not only the duration of the 2011 January 25 Revolution but also the title of one of the most controversial films in the history of Egyptian cinema.

Oddly, the Egyptian film premiered at the 2011 Cannes Film Festival but did not reach the Egyptian masses until July 3, 2017.

The film did not stir controversy because it is political or because it focuses on one of the most sensitive political events in Egyptian history; in fact, many films have been stricken by bans in Egypt because they are political. Instead, it is controversial because its lack of screening in Egypt is so mysterious.

The controversy behind “18 Days” was sparked in May 2011 when news spread about it competing at the Cannes International Film Festival, though few in Egypt had heard of it. Its producers clarified in a statement on May 13, 2011, that the film consists of 10 stories or short films recounting humanitarian and political events during the revolution from both inside and outside Tahrir Square. An elite group of actors, including Ahmed Helmy and Mona Zaki, starred in the film.

The statement said the film is initially a work of art not intended to promote any political idea or fuel revolution, indicating that preparations started in February 2011 with the personal efforts of the filmmakers and that profits will be allocated to development projects.

Almost a week after it appeared on YouTube, the film got nearly 3 million views despite its somewhat serious and rather depressing social and political content, and was able to have a rating that competed with that of films released in cinemas during the 2017 Eid al-Fitr season.

The film was screened in May 2011 at the 64th Cannes Film Festival as part of the festival’s new initiative celebrating cinema in a different country each year. It also participated as a contender in the Baghdad International Film Festival in 2011. However, it was never released in Egypt’s film theaters. In October 2015, Vetogate news website reported the film was banned by Egypt’s General Directorate for the Censorship of Artistic Works because of its offensive language and reported that the censorship authority had informed the filmmakers of its comments.

In a press statement on July 5, Khaled Abdul Jalil, the head of the General Directorate for the Censorship of Artistic Works, said the film was not banned by the directorate since it was never submitted to it, asserting that the directorate has nothing to do with the film’s delayed screening.

Also on July 5, Sherif El Bendary, one of the film’s directors, told Raseef22 news website, “I do not know who has been banning the film all this time.”

In an interview with CNN on March 6, director Yousri Nasrallah — a co-director in the film — said, “The film has been banned in Egypt by the censorship authority and some security services because some are trying to obliterate the memory of the January 25 Revolution.

The former head of the General Directorate for the Censorship of Artistic Works, Sayyed Khattab, had told Al-Monitor during the shooting of the film in 2011, “Two permits are required to show a film in Egypt. The first is the shooting permit, which is obtained by the filmmakers after having submitted a copy of the script to the Directorate for Censorship. '18 Days' has obtained this license, and no comments were raised on its script. The second permit is the commercial permit to show the film in film theaters. This permit is obtained when the Directorate for the Censorship approves the final version of the film. The filmmakers of '18 Days' did not submit this version to obtain such a permit.”

He added, “The film is a collaborative work of several producers and directors, and they may have disagreed about its commercialization or release date, especially if one of the filmmakers modified the script approved by the Directorate for Censorship during the filming by adding obscene and offensive terms showing in the version released on YouTube. The dispute between the filmmakers is likely due to inconsistencies in statements between Nasrallah, who claims the film has been banned by the Directorate for Censorship, and Bandari, who says he does not know who is banning the film.”

The film contained some scenes showing torture by State Security Investigations service officials of citizens calling for demonstrations on January 25, 2011, and this may be why Nasrallah insists that the film was banned by the censorship authority or upon recommendations of security services.

Khattab ruled out this possibility, saying, “Many artistic works displayed between 2011 and 2012, and perhaps even now, have criticized the Interior Ministry under the Mubarak era. This does not harm the current Ministry of the Interior, whose leadership has been changed several times in the past years.”

He added, “It is also unlikely that the foul language would be the reason for a ban since several films have been able to solve this issue by bleeping or by rating the film for specific age groups. I think the reason the film was never screened is due to a dispute among filmmakers who have divergent political orientations and views and different ways of dealing with the recommendations of the censorship authority.”

In a press statement July 5, Nasrallah said he was thrilled the film received such a large number of views after years of being banned. A source close to the filmmakers told Al-Monitor on condition of anonymity, “Many of the filmmakers had lost hope of seeing it shown in Egypt’s film theaters. They were happy with the fuss it caused and the millions of hits it obtained and did not submit to YouTube management any request to remove it.”

Film critic Nader Adly explained the success of the film on YouTube by saying, "The film is very influential and really good despite the weakness of some of its stories. I think the six-year ban created a great desire by the audience to see it.”

He added, “YouTube is popular among the youth, and youth played a major role in the revolution. They are interested in seeing their personal experiences in the revolution materialize on screen.”

State efforts have found it harder each year to ban, track and remove artistic works. The same networks and social networking sites that served as a platform for young Egyptians’ demands for political freedom on January 25, 2011, have now become an arena for the protection of artistic and cinematic freedoms after the screening of “18 Days” in July 2017, regardless of who was behind the film not being screened.