Oscar-nominated 'The Square' not yet available in Egypt

With the recent violence in Egypt, the first Egyptian film nominated for an Academy Award is more relevant than ever, but not yet available for general viewing. 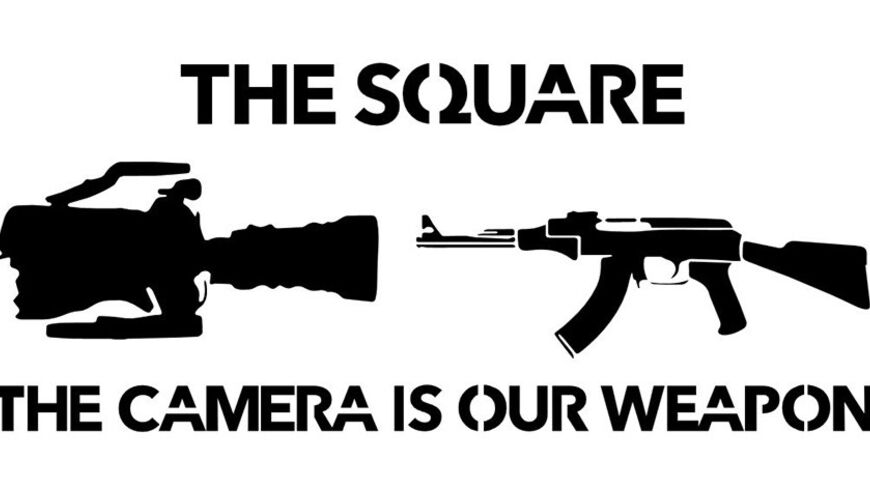 The makers of "The Square" offer a stencil on the website to help spread the word. - thesquarefilm.com
Shadi Rahimi
@shadirahimi
January 27, 2014

CAIRO — On the third anniversary of Egypt's January 25 Revolution, activists were delivered a number of blows. Thousands of army and government supporters rallied in Tahrir Square, the iconic epicenter of the revolution. Security forces shot tear gas and bullets at a crowd of activists marching toward Tahrir, including Khalid Abdalla, one of the stars of "The Square," the Oscar-nominated documentary about the revolution.

Two days before this year's anniversary, two dozen friends gathered in the living room of a houseboat on the Nile to watch a pirated copy of "The Square." They booed and hissed when a military spokesman defends the state’s actions, and they clapped when a Muslim Brotherhood member denounces the group’s political maneuvering. The next day, Jan. 24, many of them woke to the sound of a deadly car bombing that echoed downtown, one of four blasts in Cairo that day.

As eight major US cities prepared for the film's cinematic debut, Tahrir Square was closed to traffic by military vehicles, and members of the Muslim Brotherhood were clashing with security forces in other districts. At least 14 Brotherhood supporters were killed.

The following day, the anniversary of the 2011 uprising, clashes among police, activists and Brotherhood protestors would leave more than 50 dead and in excess of 1,000 arrested, including journalists. Government supporters on Tahrir called for General Abdel Fattah al-Sisi, the defense minister, to run for president. On Jan. 26, the interim president announced that presidential elections would be held before parliamentary elections, altering an army-drafted political road map and increasing the likelihood that Sisi will be elected to lead the nation.

The climate in Egypt today is starkly different from three years ago, but many who have seen "The Square" here are telling others to do the same, if for nothing else, to remind them of what drove them to push for the ouster of President Hosni Mubarak in the first place. The film documents the twists and turns of Egypt’s ongoing revolution, mostly through the eyes of activists and a member of the Muslim Brotherhood. “The revolution as we lived it, and are living it. Please watch it,” the screening organizer from the houseboat wrote on her Facebook page.

In Egypt, those wanting to see a screen version of the tumultuous events they have witnessed are finding that they must watch pirated uploads or reroute their computer networks using a virtual private network (VPN) to access "The Square" on Netflix, which is not available for streaming in Egypt. The film is not in theaters here, and no official screenings have been held.

Instead, several unauthorized viewings have been organized by activists in Cairo, and thousands have watched pirated uploads online, some even offering confessions to the filmmakers.

One Egyptian viewer wrote, “I want to apologize for watching the movie on YouTube. I've never been sorry to watch a pirated movie like I did with "The Square," but I was afraid to miss the movie, so I searched for any other solution, even if it’s illegal.”

The film’s Egyptian American director, Jehane Noujaim, shared this confession, posted on the film’s Facebook page by a Mohamed Omar, who promised to make amends by purchasing the DVD upon its release. “Long live the revolution,” he added.

“Very sweet. The uploads have been uncontrollable and thousands watch within the hour, it's been nuts,” Noujaim wrote in sharing Omar’s comment.

Noujaim, in an interview with Al-Monitor, said that she has “mixed feelings” about the pirating of the film. On the one hand, she said, the low-quality and manipulated versions online are not the product the 30-person film crew was hoping Egyptian audiences would see. On the other hand, she said, “To see that magic and beauty that we saw and tried to capture in a film being spread so widely by the people themselves is truly exciting.”

Dozens of uploads appeared on Youtube and Vimeo shortly after the film was made available on Netflix Jan. 17, most of them deleted in short time due to copyright claims by Netflix. One YouTube upload that eluded detection logged more than 27,000 views in a few days.

"The Square" is the first Egyptian-made film to be nominated for an Academy Award. Its Egyptian premiere was anticipated at a film festival in Cairo in December, but Noujaim said they decided not to screen it because they had not received written permission from Egypt’s censorship board. Head censor Ahmed Awaad contended in an interview with Mada Masr that he had granted permission for the film to be screened at the festival, but that a copy of it did not arrive in time. Noujaim and the film’s producer, Karim Amer, dispute this claim.

“We keep seeing the rush of people that have gone online and found ways to show it,” Amer said. “An Egypt that doesn’t understand that young people are going to express themselves and find the beauty whether it’s allowed or not is not an Egypt that’s understanding of [who] young Egyptians are.”

The producers last week signed a contract with Misr International Films for commercial distribution rights in Egypt, and are applying again for a permit to screen the film. They are also considering uploading the film for Egyptian access to their YouTube page, Noujaim said. Meanwhile, they are asking Egyptians to be patient and to avoid pirating.

“Every time the film is pirated, and the wrong version is shown, we lose our audiences,” the filmmakers wrote on the film’s Facebook page. “Please help support us in releasing this properly.”

Among the responses to their statement were more confessions, along with criticism, support and even defiant comments, asserting that Egyptians should be able to watch the full, uncensored film — pirated if necessary. Some even expressed disappointment about the Jan. 17 online release being on a platform unavailable in Egypt.

In one tweet, ‏@NadeemGawad asked Noujaim, “How come @TheSquareFilm, a movie about what we have been living for the past 3 years, won't be available in #Egypt tom.?!” The director replied, “Good question. Working on changing the Rekaba's [censorship] decision.”

Cairo resident and film enthusiast Ahmed Ellaithy accessed the film on Netflix through Hola, a Google Chrome app, and screened it for friends last week. He said he found the film to be “brilliant” for its ability to present varying perspectives during the seismic political shifts and a “more cohesive and realistic reading” of events in Egypt.

“I am of course not a proponent of [pirating] films, but I am also a proponent of reform [of] the system so we get easier and quick access to a larger variety of good cinema,” he said. “I know I'll likely buy the DVD and catch the film in the cinema — if it ever makes it — as the experience of watching this film with a large of group of Egyptians in Egypt who I don't know would be worth every penny.”

Another Cairene, Muhammad Mansour, recently shared a list on Facebook of unofficial viewings organized by local residents. He said he does not think the film will have an impact on the general public or on current events in Egypt, “but for the revolutionaries it means a lot.” He added, “I felt a little uplifted and for a few seconds believed there was hope for Egypt. It may only have lasted a few seconds but that in itself, for me, made the movie worthwhile.”

Rasha Hassan, who owns a cultural center in Cairo, said that she is awaiting permission from the filmmakers to screen "The Square" at her weekly movie nights. She will not show it if they decline her request, which includes compensation, she said.

It is vital, Hassan thinks, for a film made by Egyptians about Egypt to be seen inside the country, especially with frustration permeating activist camps on the third anniversary of the revolution. “We didn't earn what we dreamed of — not yet,” she asserted.

The current reality on the ground makes "The Square" all the more poignant, Hassan believes. “The movie means a lot for the revolutionary Egyptians,” she said. “It documents the most critical point in our modern history. The pain … It documents the ongoing pain. Being nominated for the Oscars adds depth to that pain now disclosed to the world.”