Erdogan tones down rhetoric in light of Qatar's fate

Turkey fears it could be next in line to be ostracized in the region due to guilt by association with Qatar and the Muslim Brotherhood. 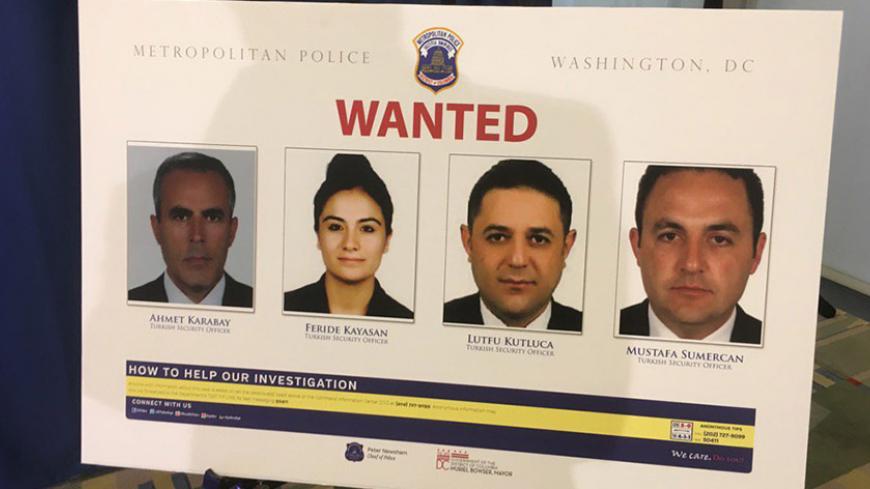 A poster displayed at a news conference shows four members of Turkish President Recep Tayyip Erdogan's security detail who have been criminally charged following a May incident in Washington, DC, in which they allegedly attacked protesters during Erdogan's visit. Image uploaded June 15, 2017. - Twitter/@DionNissenbaum

Will Turkish President Recep Tayyip Erdogan ever be welcome in Washington again? Many US legislators would like to think he wouldn't dare come back after the horrid events of May 16, when his security detail attacked peaceful protesters.

Just days later, a bipartisan House resolution was introduced to condemn Turkey and ask for the perpetrators to be prosecuted. Dana Rohrabacher, Republican chairman of the House Foreign Affairs Subcommittee for Europe, said Erdogan "is an enemy of everything we stand for. … More importantly, he is an enemy of his own people.” These are some of the strongest words of public criticism Erdogan has received from an American lawmaker. In early June, the measure asking that those involved in the Washington mayhem be brought to justice was accepted by a 397-0 vote.

Two powerful members of the Senate also voiced sharp bipartisan criticism of the incident. Dianne Feinstein, D-Calif., and John McCain, R-Ariz., in a May 18 letter told Erdogan that his staff had blatantly violated American freedoms and that the "affront ... reflects poorly on your government." McCain chairs the Armed Services Committee, and Feinstein is the ranking member of the Judiciary Committee.

On June 15, Washington law enforcement officials announced criminal charges had been filed and arrest warrants issued for 12 members of the detail. Though the guards had already returned to Turkey and it's unlikely they will ever stand trial, media coverage of their photographs with the word “Wanted” at the top sent shock waves to Turks. Most Turkish media outlets were not quite sure whether to publish the news or ignore it.

Erdogan promptly lashed out at the US justice system, asking, “What kind of law is this?” He claimed the protesters were terrorists — members of the Kurdistan Workers Party (PKK) and the Gulen movement — and were demonstrating only about 50 yards from him, yet the US police did not act. Erdogan said, “If these bodyguards would not protect me, why am I taking them with me to the US?"

Erdogan sees any protest as a direct attack on himself, hence his justification of his bodyguards’ physical assaults on peaceful protesters. Anyone in any location who dares protest against Erdogan is seen as an imminent threat — a terrorist who needs to be eliminated.

Yet Erdogan’s fluency in anger didn't pack much of a punch in this case. US Secretary of State Rex Tillerson shared a clear and strong message backing up the bipartisan House resolution and the actions of Washington law enforcement agencies. Although the United States has not expelled the Turkish ambassador and is well aware that the 12 bodyguards won't be extradited, its strong message has been sent and received.

On June 16, a rather mellow and patient Erdogan gave an interview to a Portuguese TV channel in which he said Turkey is ready to do whatever it takes to be accepted into the European Union. He clearly and repeatedly stated that the Islamic State (IS) and al-Qaeda are terror organizations. So what led to this calmer and compromising Erdogan? It seems the Gulf crisis, in which many countries cut ties June 5 with Turkish ally Qatar, has been quite effective in curbing Erdogan’s anger and serving as a wake-up call for different groups in Turkey. Could the same thing happen to Ankara?

For decades, members of the Justice and Development Party (AKP) along with affluent businessmen operated under the assumption that Turkey is deeply integrated into the West and there is too much money invested to isolate the country.

Al-Monitor has interviewed business elites in the past two years about Turkish involvement in the Syrian civil war. The majority were confident that as a NATO member, Turkey need not worry that it might be accused of being a state sponsor of terror. However, since the Qatari crisis began, concern has risen. The thunderbolt sanctions imposed on Qatar for allegedly supporting terrorist networks — which it denies — was a shock for Turks. One businessman told Al-Monitor, “For the first time, I realized that what can be done to Qatar in a day would destroy my family’s businesses overnight" if it happened in Turkey. "I need to secure my assets before it is too late.”

Indeed, Turkey has been associated with Qatar for a while. For example, in 2014, the US Congress held hearings into Hamas’ benefactors in which Qatar and Turkey were named as the group's two main financiers.

Over the years, Turkish involvement with questionable armed groups in Syria has also been raised by different sources. Several firsthand testimonies blamed Erdogan directly for aiding terrorist entities in Syria and even providing weapons to unvetted groups. Jailed Al-Monitor columnist Kadri Gursel, for example, wrote about these charges multiple times. Now there is a lawmaker, Enis Berberoglu, in jail for publicizing the scandal involving the National Intelligence Organization transporting weapons to Syria.

Also, Turkey's government has been criticized for punishing left-leaning and peaceful Islamist groups more brutally than those with open links to IS and other armed terror networks.

The Saudi-led coalition’s strong reaction against Qatar grabbed the attention of Erdogan and the secular business elite in Turkey. The fear that Turkey could be the next to come under fire has been voiced not only in Turkish media but also in The Wall Street Journal, which explains Erdogan's personal stake in the issue.

The anxiety indeed runs deeper than so far acknowledged, and it connects to whether the United States will officially declare the Muslim Brotherhood a terror organization. Some senior AKP bureaucrats known for their history of open and friendly relations with all Muslim Brotherhood chapters now respond angrily to any implication that the AKP is associated with the Brotherhood. Two tweets from a pro-Erdogan journalist who mostly writes for English-speaking audiences provide an example. In one tweet is a picture of Erdogan raising four fingers, a symbol of the Brotherhood and its support of ousted Egyptian President Mohammed Morsi. In the other tweet is the journalist’s desperate claim that the AKP’s organic connection to the Brotherhood is just a myth. Given the rising international pressure, we can expect to see pro-Erdogan media struggling to distance themselves from the Brotherhood.

One prominent Islamist, who asked to remain anonymous, told Al-Monitor, “We do not forget how Erdogan disowned the [victims of the] Mavi Marmara [the flotilla to break the Gaza embargo in 2010] and turned against them in 2016. Most Islamists in Turkey never even consider armed struggle against the state, so it is easy to discard us when the going gets tough. However, now Erdogan is dealing with different groups. Some of these groups have become militaristic due to their involvement in Syria. Can they be disowned as easily?”

US President Donald Trump initially supported the Saudi-led coalition's actions against Qatar, and he immediately became the target of outsized Turkish anger, with Erdogan bashing him to express support for Qatar while trying to avoid offending Saudi Arabia. Trump quickly backed off his statements for unrelated reasons, however, and the United States even agreed June 14 to sell F-15 jets to Qatar. Now, with Qatari officials making statements to the international press about the United States, such as “Our militaries are like brothers,” it is understandable that Erdogan would quiet his criticism of the United States and initiate a campaign to distance himself from the Muslim Brotherhood.

Indeed, Turkey was left standing alone and now realizes that the cost of all future angry outbursts will be higher both domestically and internationally. Erdogan’s next trip to the United States, whenever or if ever that might be, could be most interesting to watch after all.