With evidence indicating imminent IS attacks against them, Turkey's Alevi minorities wonder who they can trust after years of dangerous rhetoric and polices from the AKP government. 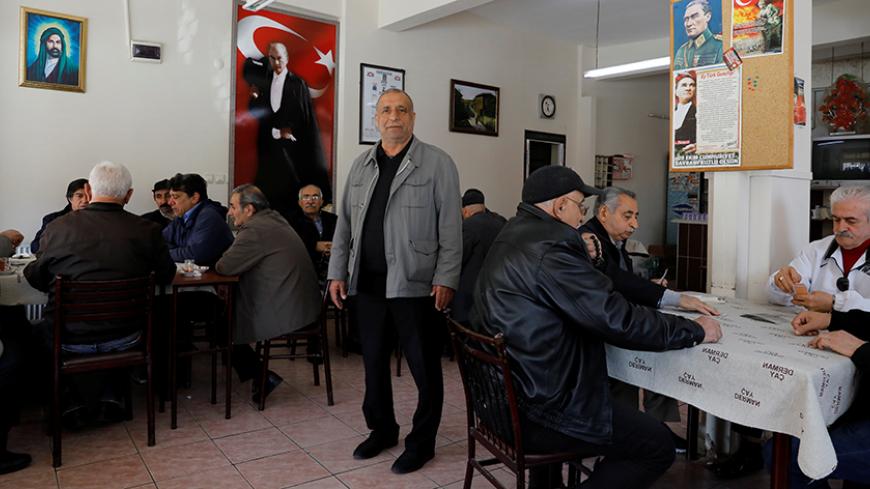 The head of an Alevi association, Muzaffer Aksakal, 65, stands in his association's cafe in Istanbul, Turkey, April 10, 2017. - REUTERS/Umit Bektas

News broke May 21 that a team of Turkish police officers with the Counter-Terrorism Department killed two Islamic State (IS) members who were preparing for an attack in the capital, Ankara. One suspected target was a prominent Alevi cultural foundation in Ankara. The terrorists had photos and floor plans of the building. This was not the first time a "cemevi" (an Alevi house of gathering and prayer) appared on IS' radar.

Ankara Gov. Ercan Topaca assembled representatives of Alevi organizations and senior police officers May 25 to warn the Alevis to be vigilant and seek private security for their prayer houses. The news was published only in a few news outlets and did not receive much attention except in the Alevi population. Gani Kaplan, chairman of the Pir Sultan Abdal Cultural Association, told the newspapers something crucial: "The authorities always tell us we are under threat and we must take precautions. We fear Turkey is under the threat of a civil war." Kaplan warned that tensions are already so high between Sunnis and Alevis that any attack could set off further conflict.

IS could provoke such a situation by creating the appearance that Sunnis and Alevis have attacked each other. Kaplan said, "Just bombing a cemevi would not instigate a civil war, but [IS] attacking a mosque after a cemevi would present a risk." He added, "We shared our concerns with the governor."

Kaplan told Al-Monitor, "The government suggested concrete methods of cooperation. For example, they told us to hire private security. However, we do not have the financial means to hire security. They told us only police officers or certified private security officers have the authority to do [preventive] searches for private entities. So we will have to get our own Alevi youth trained and certified. Municipalities will assist us in acquiring X-ray machines."

He added that the problem runs deeper, and IS isn't the only threat. For nearly 15 years, Justice and Development Party (AKP) governments have instigated anti-Alevi policies and rhetoric and fanned the flames of enmity toward Alevis. Alevis have been resisting state-sponsored efforts at Sunnification and therefore face increasing discrimination at all levels of public life.

Baki Duzgun, who was chairman of the Alevi Bektasi Federation from 2014 to 2016, told Al-Monitor, "If we view the gathering of the Ankara governor with the Alevi leaders in Ankara simply as a security meeting, it would be incomplete. This would be ignoring historic, cultural and sociological realities of the Alevis.”

Duzgun cited dozens of attacks that have taken place in modern Turkey against Alevi communities. These were large-scale attacks that have not been prosecuted properly, leaving deep scars in Alevi communities. In the past decade, with the AKP's intensified Islamization efforts, Alevis have been one of the most disadvantaged groups in the country. It is not just bomb threats that scare these groups, but the deep-rooted anti-Alevi sentiments.

Alevis refuse permanent police presence on their premises. They have good reasons to fear blacklisting by the security and intelligence services. For example, in May 2014, Ugur Kurt — an ordinary citizen who was waiting to attend a service inside a cemevi in Istanbul — was shot by a stray police bullet. The police officer was tried but did not serve one day in jail. In April 2017, the court decided he should only pay 12,100 Turkish liras (about $3,400) to Kurt's family. On May 29, Kurt's mother was in court because a prosecutor alleged she had harmed the wrist watch of the police officer’s lawyer.

It would not be an exaggeration to say that the justice system in Turkey has been systematically working against the Alevis. Kurt is only one of dozens of painful examples in recent years. Hatice Altinisik, chairwoman of Alevi Bektasi Institute, told Al-Monitor, "Who can guarantee us that the police officers sent to protect us would not be the ones attacking our prayer houses? I mean, what if they are members of the Gulen organization or others? Was it not an active duty police officer who assassinated the Russian ambassador?"

Altinisik, along with other active Alevi community members, is worried about the increasing security risks, but they are also concerned about the government's unrealistic recommendations. The advice of hiring private security is worrisome. Turkey's private security industry has been a burgeoning sector in the last five years. A prominent security expert who owns one of the major companies in Istanbul spoke to Al-Monitor on the condition of anonymity and said, "The government has been providing certificates for companies who follow an ultranationalist and Islamist line. You cannot find any left-leaning or Alevi companies in this sector, because they cannot receive certificates." In addition, dozens of security firms were shut down after the July 15 coup attempt for their alleged links to the Gulen organization. Plus, it takes months to complete training and paperwork for certification.

So the suggestion to train Alevi youth to protect cemevis, as good as it sounds, is neither a timely nor viable solution. The security expert said, "Even if they are certified, look at what happened at the New Year shooting at Reina nightclub in Istanbul. There was one gunman and dozens of private security guards, and scores of people, including security personnel, were murdered within minutes." Private security is not a credible solution to an imminent IS attack.

Yet, having this environment of fear, coupled with police surveillance, prevents observant Alevis from visiting the places where they usually congregate. Given that none of the proposed solutions provide any sort of relief from an imminent IS attack on cemevis, why would the governor of Ankara hold such a meeting? If the threat is serious, shouldn't the interior minister and other senior authorities be involved? Altinisik emphasized a crucial point in this discussion that the risk of an IS attack is elevated not just for Alevis but for everyone in Turkey. Authorities also suspected the terrorists might have been targeting an enormous AKP meeting in Ankara May 21 that drew tens of thousands of people, including hundreds of politicians.

Numerous Alevi community members in Ankara, Istanbul and Europe told Al-Monitor that they believe the state informed them of the risk assessment to provide itself with political cover. If an attack happens, the government could wipe its hands clean and say, "We warned you."

It's quite telling that Turkish President Recep Tayyip Erdogan, who was busy Turkifying the names of sports arenas, did not bother to comment on the issue or try to defy IS with a declaration. Alevis and many secular Turks don't believe the government is even fighting IS. In fact, one Twitter user implied the AKP government is actually helping IS: "Who treated [the wounded IS soldiers at hospitals] in Istanbul, Hatay and [Gazi]Antep [provinces]?"

That may just be the crux of the growing threat in Turkey after all.