After IS threat, Turkey’s Alevi community on alert

The Turkish police have disclosed intelligence of possible IS attacks on Alevi institutions but have yet to enforce protection measures. 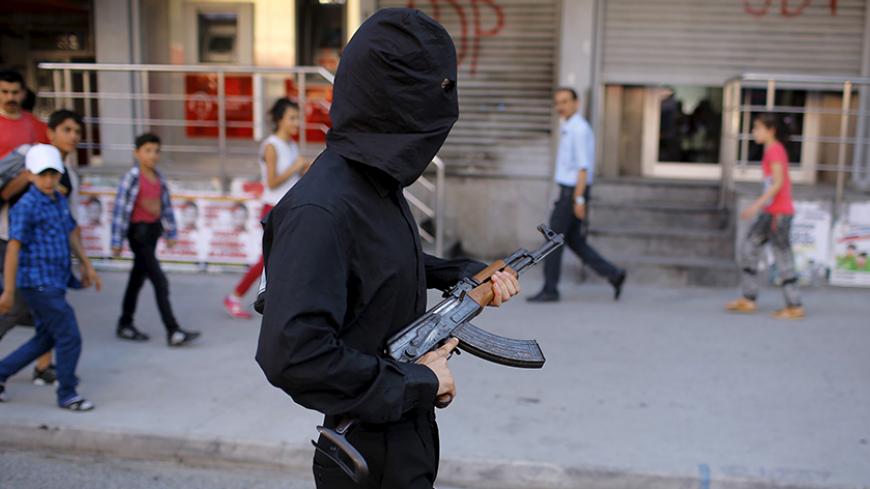 Armed men escort the coffins of victims who were killed in a bomb attack in Suruc as they arrive at Gazi Cemevi, an Alevi place of worship, in Istanbul, July 21, 2015. - REUTERS/Huseyin Aldemir

On Nov. 6, the head of Turkey’s Alevi-Bektashi Federation, Baki Duzgun, received a call from the police anti-terror department, inviting him to their headquarters in Ankara. Duzgun was in Istanbul that day, so a delegation representing the federation went to the meeting. It turned out the police had an alarming message to convey. “We got intelligence that the Islamic State [IS] is planning attacks on Alevi institutions. You have to take precautions,” they said.

That’s how Duzgun recounted the meeting to Al-Monitor. And was he surprised with the police’s message? “No,” he said, “not at all.”

The Alevi community and the Turkish public in general were hardly surprised either, for Alevis have been the target of a series of disturbing incidents in the past several years. The list is long, but even a short overview of the most recent ones explains why the alert came as no surprise.

To start with, unidentified people have been marking Alevi homes across Turkey for months. For Alevis, the marks are an ominous message with historical connotations. The 1978 massacre of Alevis in Maras was preceded by similar red "X" marks on Alevi homes. Four decades later, the marks are back.

In June, for instance, the marking of an Alevi family’s apartment in Istanbul’s Bahcelievler neighborhood became the subject of a criminal complaint that included the account of a witness who had stumbled on the markers. The witness, a neighbor living upstairs, described the two perpetrators as bearded men wearing military shirts. “The next time we come, it will hurt,” the neighbor quoted one of them as saying. In an even more alarming detail, he said the pair had a list of the neighborhood’s Alevi residents and sought to confirm their identities. Simultaneously, Alevi homes were marked in Istanbul’s Umraniye and Catalca neighborhoods as well as in the provinces of Kocaeli and Malatya.

Marks have appeared also on the walls of Alevi homes in the eastern province of Adiyaman, which has emerged as a major IS recruitment center in Turkey. Umut Oran, a former lawmaker for the main opposition Republican People’s Party (CHP) who made a field trip to Adiyaman in July, described a terrorized Alevi community, with some keeping round-the-clock watch outside their homes and villages.

The markings have been accompanied with reports of dubious people conducting “reconnaissance” in Alevi villages. In early August, residents of the Maksutusagi village in the eastern province of Erzincan reported that two bearded strangers, clad in white robes, roamed through the village in a car for two days in a row. When residents attempted to stop the car, it sped away. The villagers believed the visitors were IS militants on a “reconnaissance” mission. Around the same time, Adiyaman’s Yarmayaka village reported a visit by bearded men wearing baggy pants who went around the village posing as carpet vendors while asking questions about Alevi communities in the area.

Ali Haydar Hakverdi, an Alevi parliament member for the CHP, also believes the strange visits to be a kind of a reconnaissance. In an interview with Al-Monitor, he said, “People call me also from villages in Sivas and Malatya to convey their anxiety over bearded men clad in robes coming to their villages. These are villages with very small populations, made up mostly of vulnerable, elderly people. They shy away from confronting those suspicious visitors to ask them who they are. So, they choose to call us instead, and we refer them to the security forces. In my opinion, these incidents do seem to be reconnaissance activities, and that’s what everybody suspects.”

The alarm grew further on Aug. 7 when Duzgun, his wife and Dogan Demir, the head of the Alevi Cultural Associations, came under an armed attack on a highway near Ankara as they drove to a conference in the capital. Luckily, all escaped unscathed.

“We filed a criminal complaint [but] not even a crime scene investigation was conducted,” Duzgun told Al-Monitor. The attack, he said, “could have been the work of either IS or those who nurture it.”

In further remarks, Duzgun disclosed details about the police’s latest alert, while making no secret of his deep mistrust in the security forces. “The police officials told our delegation they had intelligence of IS threats against Alevi institutions. They said we have to take precautions and that they, too, would take measures. Later, they offered to assign me a bodyguard, but I declined. ‘Who is going to guard me from that bodyguard?’ I thought. In this system, I have no trust in the police either. A state does not report the intelligence it gets to the threatened institutions. But when it comes to us this happens because they want Alevis to feel frightened, to give up their struggle and sit at home.”

The Alevi community, however, remains largely “calm” and “high spirited,” Duzgun said, stressing that the Alevi psyche “has been hardened by all the massacres Alevis have suffered” since Ottoman times.

“And that’s how it is supposed to be,” he added. “After reading about the police’s alert, people called to ask what they should do and how they should react. We told them to wait. The threats are not something new. The new thing is that we are being officially notified of the threats. The problem here is not only an Alevi problem. It is everybody’s problem and hence everybody holds responsibility.”

As Duzgun’s remarks clearly show, the latest incidents have only deepened the mistrust of a community historically ostracized and persecuted over its distinct faith. Alevis were already disgruntled over persisting discrimination in many realms, from education to religious rights. The Turkish state views Alevism not as a faith but as a culture, and Alevi children are subjected to compulsory Sunni-dominated religion classes in public schools. Unlike Sunni mosques, which receive state assistance, the Alevi houses of worship — the cemevis — are not recognized.

And now, no real investigation has been carried out into the marking of Alevi homes, torching incidents at Alevi businesses and the armed attack on Alevi leaders. No wonder then that Alevis prefer to turn down police offers of protection.

This, however, does not exempt the state from the duty of protecting its citizens. And though the police have chosen to disclose some alarming intelligence, they are yet to enforce any protection measures at Alevi institutions.