Alevis find saying no to Erdogan a tall task

Prime Minister Recep Tayyip Erdogan’s lavish iftar feasts during the presidential campaign are generating controversy, including a decision by the Alevi community to reject an invitation to one of the dinners. 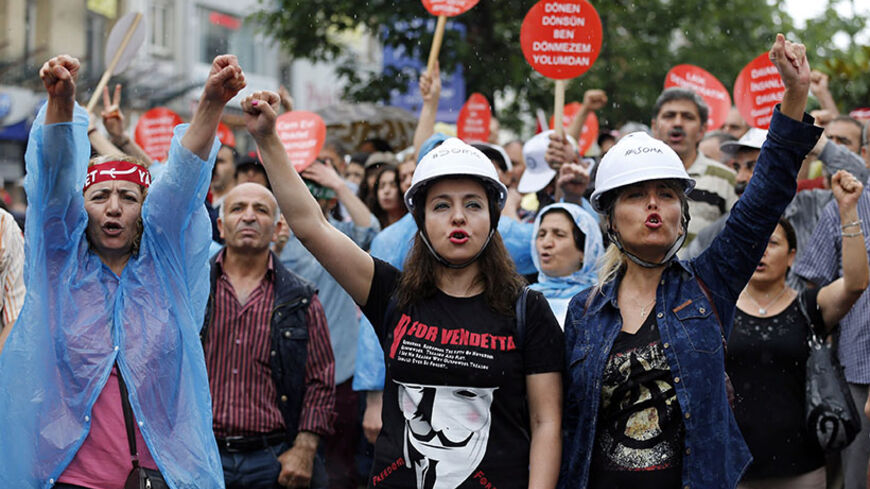 Alevi demonstrators shout anti-government slogans during a protest against the latest violence in Okmeydani, a working-class district in Istanbul, May 25, 2014. - REUTERS/Murad Sezer

On July 21 in Ankara, the Alevi Bektasi Federation (ABF) announced that it had politely declined an invitation from Turkish Prime Minister Recep Tayyip Erdogan for its members to attend iftar, the breaking of the fast during Ramadan. As the holy month draws to a close, Turkey's presidential candidates have mobilized to attract different groups to their iftars.

The prime minister and his Justice and Development Party (AKP) were already known for their lavish, high-end iftars, and the election campaign has only intensified dinner traffic. Every evening, the media carry reports of Erdogan addressing pre- and post-iftar gatherings, turning them into live events for the country to follow on multiple TV channels. Crowds are encouraged to cheer for Erdogan during the live broadcasts as he passionately campaigns. In the first days of Ramadan, a photo of Erdogan was shared on social media asking, “Are you ready? He is fasting and is even angrier.”

At the July 11 iftar, Erdogan had announced his “vision program,” which involves multiple democratization and resolution packages, in particular concerning the Kurds and Alevis. Following that dinner, the AKP informed the media that there would also be an iftar where the details of the Alevi opening would be announced. The main goal was to “gather all Alevi organizations under one roof.” Ministers, Alevi parliamentarians, academics and elders were to be invited.

This was the setting as I approached the quiet, shaded garden in Ankara on July 21 to listen to an announcement by Fevzi Gumus, chairman of ABF. A soft-spoken and articulate lawyer, Gumus was calm and clear in justifying the Alevis' rejection of Erdogan’s invitation. Everyone in the garden was confident that the announcement would not make the prime time news on mainstream media unless some major drama unexpectedly ensued. One journalist observing the event told Al-Monitor, “Unless someone here curses at Erdogan or declares their love to him and calls us all traitors, this news will not see the light of the day.”

On behalf of the federation, Gumus presented a list of reasons why the Alevis would not be dining with Erdogan. Although the AKP prides itself on being the first party to allow Alevis to express their identity and their demands, the ABF and several Alevi elders and associations offered firm evidence countering AKP claims of advancing Alevi rights and freedoms.

The ABF's news release noted that the 293-page long “Research on Religious Life in Turkey,” published by the Religious Affairs Directorate, does not include the word “Alevi.” Turkey will have to assess at some point where the Alevis fit in a country described as 99.9% Muslim: If they are Muslims, why aren't their houses of prayer, cemevis, considered official places of worship in official rhetoric? If they are not Muslims, how can Turkey have a population that is 99.9% Muslim? The government’s rhetoric on the Alevi opening fails to address this issue.

The ABF release also made it clear that Erdogan’s iftar invitation was being declined because the enmity of the prime minister and the AKP toward Alevis is clear and in the open. Gumus read the 13-item list detailing repeated discrimination against Alevis on multiple levels. Among the items were that their holy places were being turned into “mosques.” When Alevis in Erbaa, Tokat, protested the government's takeover of their historic holy shrine this month, Abdulkadir Demir, the district governor and government representative, went on record as saying, “Are you trying to silence the ezan [call to prayer] in Muslim Turkey? Then I wonder whether you are Muslims.” In addition, Gumus emphasized that the Gezi protests are being called “Alevi rebellions,” and Alevi businesses and neighborhoods have been the target of angry crowds.

Among other concerns cited were the labeling of Berkin Elvan, the Alevi teenager who died this year after being hit by a police-fired tear gas canister in 2013, as a “terrorist” by Erdogan, the AKP government’s dubious dealings with militant Islamist groups in Syria and Iraq and Erdogan’s resistance to formally designating Jabhat al-Nusra and the Islamic State as terror organizations. Gumus ended his speech with a heartfelt statement, announcing, “We will not attend Erdogan’s iftar, because when children are being murdered in Gaza, Syria and Iraq, it would be haram [religiously forbidden and unacceptable] for Alevis to dine in luxury restaurants, with fake smiles and perpetual lies.” Another member of the federation added, “We refuse to be used as mannequins or movie extras, figurines who endorse Erdogan’s candidacy for the presidency.”

Despite their serious grievances and the documented discrimination against them — such as being blocked from government employment and denied recognition of their religious rights — the Alevis at the gathering were polite and soft-spoken. The meeting ended with the message that they were ready and willing to engage the government for find real solutions to their concerns. They were, however, unapologetic in their refusal to be “showcases” for the de facto endorsement of an Erdogan presidency through his iftar dinners.

The ABF had informed journalists, “The AKP government has supported the creation of fake Alevi federations. They take the names of existing ones and insert Anatolian in the title. These associations do not represent Alevis.” The federation also expressed concern that only a few Alevi elders with close business relations with the government had attended for the announcement.

As predicted, the ABF's rejection did not make headlines in the mainstream media. Indeed, watching pro-AKP TV channels one never would have known about it. Instead, pro-AKP media reported that Erdogan had held an iftar dinner with “prominent opinion leaders.” This iftar, however, was different, as there were no post-dinner photo ops of the participants with Erdogan. Attendance was small, and the cameras focused exclusively on the presidential candidate.

There was another detail that did not make the news in Turkish. Ali Kenanoglu, chairman of the Hubyar Sultan Alevi Culture Center, told Al-Monitor, “There were certain elders from prominent 'dergahs' [dervish lodges] at the iftar. This is important to note because these are respected associations of the Alevi community. Why did they feel obliged to attend? Because according to [Turkey's] arcane rules, all dergahs belong to the state; every nine years, there is a new contract. So when the government sends an invitation, what option does the dergah elder have but to oblige?” The government indeed uses the properties of the Alevis against them: If they want to keep what little they have, they must comply.

The iftar with Alevis must have felt quite different for Erdogan compared with the others, where he is received warmly and with excessive fanfare. A couple of these controversial gatherings have involved Turkish celebrities. One such dinner was held while Palestinian President Mahmoud Abbas was in town, and Gaza was being bombed. This iftar generated incongruous photos of Erdogan and Abbas among Turkish celebrities. Social media buzzed with strong criticism of the smiles and fancy dinner as the country mourned the victims in Gaza. Social media users were particularly harsh on the actors who attended, so much so that Zerrin Ozer, an Alevi singer, announced that she planned to sue some 50 people who had insulted her. Ozer's use of slurs against her fellow Alevis convinced more than a few people that there are indeed rewards for those who comply with Erdogan’s dinner invitations and potential penalties for those who do not.

Public endorsement of Erdogan during the presidential campaign is seen as a good investment for future personal returns among many businessmen, community leaders and actors. It is an open secret that refusing Erdogan is hard to do.