The relative calm prevailing in northern Syria’s opposition-controlled areas, specifically in Idlib province, is inspiring relief organizations to launch reconstruction projects aimed at infusing life back into the devastated areas. 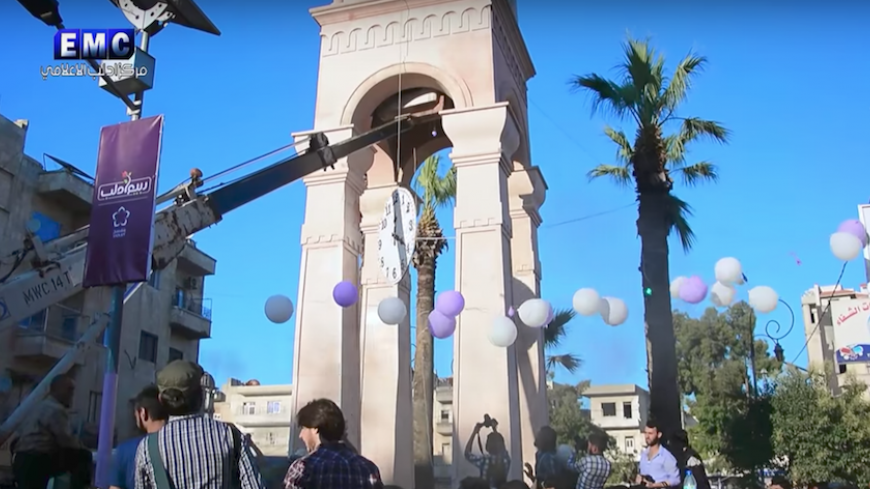 Residents of Idlib celebrate the restoration of the city's famed clock tower in a screenshot from this video uploaded May 27, 2017.

ALEPPO, Syria — There are signs of new life, and hope, in northern Syria.

On May 27, the Violet organization, with the cooperation of the Idlib Provincial Council, launched the Idlib Spring project in light of the de-escalation deal signed May 6 in Astana, Kazakhstan, between the Syrian regime and armed opposition factions. The deal, brokered by Russia and Turkey, has brought a relative calm in opposition-held areas, particularly Idlib city. The agreement establishes four de-escalation zones for a minimum of six months in Idlib province and parts of Aleppo, Hama and Latakia.

The Idlib Spring project is designed to rehabilitate areas shelled by regime forces. It hopes to bring the city back to life as it was before the shelling. The project also aims to rebuild all areas shelled in Idlib city and recondition the city’s infrastructure, such as schools, hospitals and public parks. More than 1,500 workers are involved in the project and perform their duties under Violet’s supervision.

Violet, a humanitarian relief nongovernmental organization, was established in 2014 and receives funding from international, Arab and individual donations. It's noteworthy, however, that the project doesn't include home construction, and no other government or nongovernmental agency has so far announced such plans for Idlib.

About the current efforts, Violet Communications Director Nour Awad told Al-Monitor, “As spring season opened, Violet launched Idlib Spring, a huge project in and around Idlib city.” With the provincial council's help, on May 27, the newly restored tower clock and surrounding City Clock Square were dedicated, signaling completion of the project's first phase.

The second phase of the project is expected to launch by early June and end in late August. By then, Awad said, "All the public facilities shelled in Idlib city [will be] restored and rehabilitated."

“More than 600 workers and 100 volunteers will take part in the renovation works. The organization has already started during the month of Ramadan with preparations for similar projects in other cities in Idlib, such as Maarat al-Numan, Jabal al-Zawiya, Marea and Jarablus near Aleppo. As the work starts in these parts, the overall number of workers will go up to 1,500” and will include both men and women, Awad said.

Civilians welcome Violet’s project, and a number of young men and women have volunteered. The people of Idlib province see the effort as the first step toward other reconstruction work in their cities that were destroyed by indiscriminate bombing. It also gives them hope that they can live in Syria despite all the tragedies caused by the strikes and siege.

A man using the pseudonym Abu Alaa told Al-Monitor he had fled his city of Aleppo to Idlib city. “It is good to see that signs of life have returned to Idlib city. Our hearts were filled with the fear that Idlib would turn into a battlefield for the regime aircraft, as was the case with Aleppo. The shelling was, however, halted and organizations embarked on restoring bombarded districts. We hope that similar projects be implemented in Aleppo city, which the regime has almost ruined.”

Abu Alaa added, “As a civilian, I hope the war comes to an end and the international community does everything in its power in this regard. I have children and I wish them to grow up under better conditions. I really hope that our cities and villages can be brought to life again. It all depends on [Syrian President] Bashar al-Assad stepping down. If the international community had helped oust [Assad] a long time ago, we would not be experiencing these crises. If it does now, Syria will become better than it was six years ago. We have the talent and youths. One cannot imagine how fast we can rebuild our country.”

Syrians hope life will return to their towns and villages. Displaced Syrians in particular hope to return to their houses, which were mostly ruined by the regime air raids, surface-to-surface missiles or barrel bombs. Idlib Spring's signs of beauty are clearly observed in the city, recalling the vibrant streets and alleys prior to the war.

Abbas Shami, who lived in the Madaya city of Rif Dimashq before he fled to Idlib city, told Al-Monitor, “As a Syrian citizen, I am overjoyed to see Idlib city residents rehabilitating and reconstructing what the bombardment destroyed. I am saddened, however, for not being able to return along with my family to my hometown, to where I was born and grew up. My house was destroyed in airstrikes.”

He added, “I hope that one day soon I return to Madaya and help whoever is willing to rebuild the town. We are exhausted by the yearslong war. We want to live in peace, and we hope that peace prevails as soon as possible. We are praying to God to save us from the dark cloud that has persisted" since 2011.