Coming just days after the Pentagon began distributing weapons to the YPG, Turkey could easily construe threats of escalation by the Kurdistan Freedom Falcons as proof that US support for the Syrian Kurds emboldens the Kurdistan Workers Party. 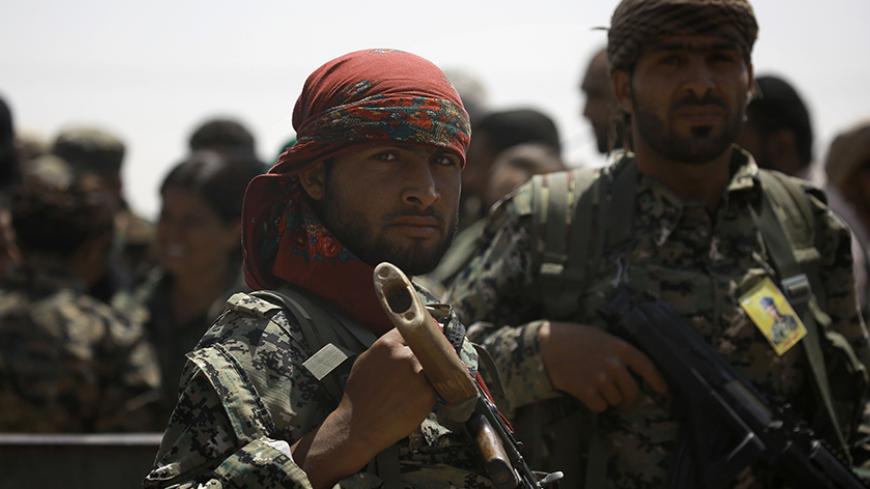 Members of the US-backed Syrian Democratic Forces stand on the northern outskirts of the Islamic State group's Syrian bastion of Raqqa in the village of Hazima, Syria, June 6, 2017. - DELIL SOULEIMAN/AFP/Getty Images

The Syrian Kurdish militia and its Arab allies known as the Syrian Democratic Forces (SDF) formally announced the start of the fight to liberate Raqqa, the self-declared capital of the Islamic State, just as another Kurdish group declared it was escalating its war against Turkey.

The Kurdistan Freedom Falcons (TAK) declared today in an incendiary statement that just as Turkey had launched “a ruthless war against the Kurdish people,” it too would be more ruthless than ever before against the Turkish state. TAK, which murdered numerous civilians in a string of previous attacks, vowed to target Turkey’s already buckling tourism industry, igniting the “fires of hell” in Turkish cities. The statement read, “We call our brave Kurdish girls and boys to take part in this war of revenge, this struggle for honor.”

Should TAK act on its threats, it will give the government further justification to continue its state of emergency slapped on in the aftermath of the failed July coup. It may also further complicate Turkey’s troubled relations with the United States, as TAK acts as the urban wing of the Kurdistan Workers Party (PKK), the militant group that has been fighting for Kurdish self-rule inside Turkey since 1984. The PKK is in turn closely linked to the People’s Protection Units (YPG), the Syrian Kurdish militia that is the United States’ top ally in the fight against IS.

Turkey insists the three groups are all branches of the same terror tree and is furious that the United States ignored its warnings against directly arming the YPG for the Raqqa campaign. Turkish Prime Minister Binali Yildirim voiced Turkish anger again today, telling the parliament that Turkey had warned the United States against the risks of "eradicating one terror group with another terror group." Yildirim said, "To support terror groups does not behoove our alliance."

Coming just days after the Pentagon began distributing weapons to the YPG, the TAK threats could easily be construed by Turkey as proof that US support for the Syrian Kurds emboldens the PKK.

It will not have helped that top PKK leader Bese Hozat told reporters, “It's time to overthrow the fascist AKP.” She was referring to Turkish President Recep Tayyip Erdogan’s ruling Justice and Development Party. Hozat also dismissed speculation of the possible resumption of peace talks between imprisoned PKK leader Abdullah Ocalan and the Turkish government that were frozen in 2015. Alluding to the jailing of thousands of Kurdish lawmakers, mayors and activists and ongoing Turkish military operations in the mainly Kurdish southeast region, Hozat said, “Discussing peace in these circumstances is equivalent to surrender.”

So far the United States has tuned out Turkish complaints about the YPG and will likely continue to do so until the operation to capture Raqqa is completed. That may not be anytime soon.

Lt. Gen. Stephen Townsend, the Baghdad-based US general in charge of Operation Inherent Resolve, said today that the Raqqa offensive would be “long and difficult.” Administration officials speaking on condition of strict anonymity to Al-Monitor have acknowledged their repeated demands, last conveyed in December through third parties, for the PKK leadership to declare a cease-fire have borne no fruit. They also concede that PKK attacks inside Turkey, especially when they result in civilian casualties, put pressure on their relations with the YPG, even though the official US line is that the two groups are separate.

Meanwhile, the United States has pledged to increase military and intelligence cooperation with Turkey against the PKK, breezily signaling a continuation of its cynical policy of supporting one arm of the Ocalan-inspired movement while working against another.