In a now familiar pattern, the Turkish authorities are denying any responsibility for the intelligence lapses linked to the stream of terror attacks that have shaken the country and whipping up fury against their opponents to deflect attention from Turkey’s ballooning other problems. 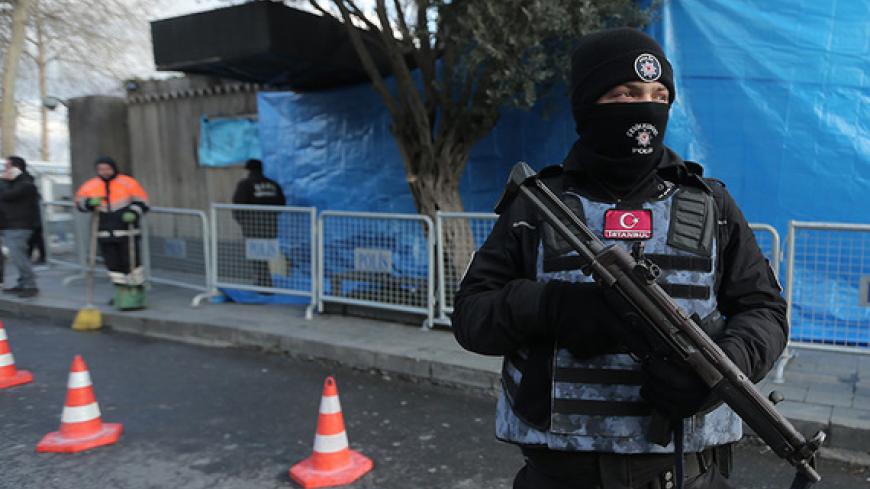 A Turkish police officer stands guard outside the Reina nightclub, which was attacked by a gunman on New Year's Eve, Istanbul, Jan. 1, 2017. - REUTERS/Huseyin Aldemir

The hunt for the unknown assailant who shot his way though security and into the heart of one of Istanbul’s most popular nightclubs, Reina, continues amid confusion over his identity.

The Islamic State has claimed responsibility for the attack, saying it was in response to Turkish military operations against it in northern Syria. The move marks the first time the group has formally acknowledged its role in a series of suicide bombings and other lethal attacks in Turkey thought to have been conducted by the jihadis.

But the pictures circulated of the man who was originally thought to be the perpetrator proved to be of an innocent Kazakh. Today, a Kyrgyz site published an interview with a second central Asian-looking man whose picture was also circulated as the likely assailant.

The man denied all involvement with the shooting spree that left at least 39 people, many of them Arab holidaymakers, dead. At least 16 people, two of them foreign nationals, have been detained in connection with the slayings so far.

In a now familiar pattern, authorities are denying any responsibility for the intelligence lapses linked to the stream of terror attacks that have shaken the country in recent weeks. Not a single official head has rolled so far, and government toadies in the media are spinning tired conspiracy theories about how the United States and its supposed accomplices are the real perpetrators.

The sole purpose, according to their argument, is to weaken and divide Turkey. Yet there is hardly any debate over what Western security officials have been warning against for some time: the growing threat of homegrown Islamic extremism and how it may be infecting members of Turkey’s own security services.

In a related development, a police officer said to have supported IS in a series of tweets was detained in the southeastern province of Siirt today.

Scapegoating others and whipping up fury against them via social media is a favored tactic to deflect blame and attention away from Turkey’s ballooning problems, including a weakening economy.

Turkey’s Prime Minister Binali Yildirim claimed today that “only Turkey” was really combating IS. “The others are engaged in a fake struggle. America isn’t doing a damn thing, nor are the others,” he fumed in a parliamentary address.

He added that 1,270 jihadis had been “neutralized” since Turkish troops launched Operation Euphrates Shield in northern Syria 133 days ago.

Yildirim also blasted the United States for arming the Syrian Kurdish militia called the People’s Protection Units (YPG), the US-led coalition’s top ally against the jihadis in Syria. “They are doing this to sow more terror, more anarchy in Turkey,” he charged. Turkey has long campaigned for Washington to ditch the YPG because of its close links to the Kurdistan Workers Party (PKK), which has escalated its terror attacks inside Turkey in recent months. As expected, the parliament extended the state of emergency that was declared after the July 15 coup attempt for a further three months.

The Barack Obama administration is still weighing whether to authorize the Pentagon to train and equip the Syrian Defense Forces (SDF), a coalition of Kurds and Arabs dominated by the YPG. Turkish pressure and the PKK’s bloody actions make it unlikely to do that. Ankara hopes that the incoming Donald Trump administration will go with Turkey’s proposal to liberate Raqqa from IS with Syrian opposition rebels instead of the SDF.

Turkey’s ongoing campaign to liberate IS-held al-Bab is partly calculated to demonstrate that it is capable of doing so. This is probably one of the biggest reasons IS has decided to declare war against Turkey and match its words with action.

Sansal was thrust to the ground and kicked around by an angry crowd that was allowed to gather on the tarmac at Istanbul's airport as his flight neared. Sansal was flying in from northern Cyprus, from which he had been deported after posting a controversial video lambasting Turks for celebrating the new year during such dark times. “Drown in your own shit, Turkey,” he said. He remains under police detention on charges of insulting Turkey and the Turkish people and inciting enmity and hatred. The semi-official Anatolia news agency had provided Sansal’s flight information prior to his arrival.