Syrian Kurds in uproar over US jabs at PKK leader

Some Syrian Kurds are furious over US attempts to placate Turkey at the expense of Kurdistan Workers Party (PKK) leader Abdullah Ocalan, and their angry statements and videos are being shared widely via social media. 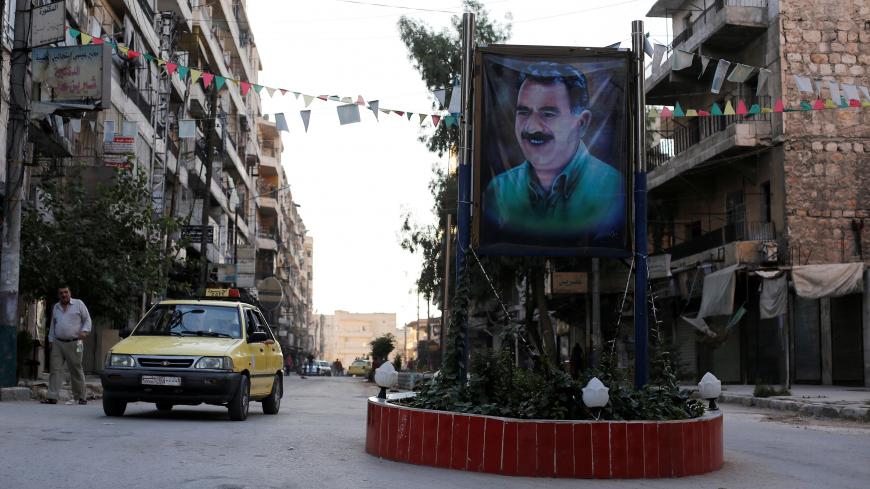 America’s gauche stabs at placating Turkey have triggered fury with another ally, the Syrian Kurds, deepening suspicions that once the battle against the Islamic State is over, they may become dispensable in Washington’s eyes.

Syrian Kurdish politicians and fighters have aired their anger against the United States for belittling imprisoned Kurdistan Workers Party (PKK) leader Abdullah Ocalan in statements and videos that are being widely shared via social media.

“As a woman, I can never imagine life that is worth living without him,” said a young Syrian Kurdish People's Protection Units (YPG) fighter in a video circulated by the group's press office. “The resistance here is first and foremost for him.”

Another male fighter proclaimed that without Ocalan, “we can’t even breathe.”

They were responding to an Oct. 21 statement from the US Embassy in Ankara that noted, “The United States Government works closely with Turkey to fight terrorism and increase regional stability. The PKK is a Designated Foreign Terrorist Organization, and Ocalan is in prison in Turkey for acts of terrorism as part of the PKK. He does not merit respect.”

The woman fighter in the video riposted: “Those who think Reber Apo [leader Apo] doesn’t deserve respect are unworthy of respect themselves.” Apo means “uncle” in Kurdish and is widely used as an affectionate honorific when referring to Ocalan.

The Movement for a Democratic Society, the top governing body in the Syrian Kurdish-controlled territories, declared in another statement: "With his ideas and philosophy, leader Ocalan represents hope for all the peoples in the region ... the American [embassy's] statement violates democracy and human rights."

An SDF official who responded to Al-Monitor’s questions on condition that he not be identified by name confirmed that women fighters in particular were extremely upset by the embassy’s statement. “They are the ones who are sacrificing their lives in this battle. They have a right to celebrate their victory as they so please,” he said in a Whastsapp exchange. “And of course it leads many to ask is this partnership one of strict convenience for [the Americans].”

The furor over Ocalan erupted on Oct. 17, when fighters from the Syrian Kurdish Women’s Protection Units (YPJ), the YPG's all-female affiliate, became the first to declare victory against the jihadis in Raqqa, the erstwhile capital of their crumbling “caliphate.” In an impassioned speech, YPJ commander Nesrin Abdullah dedicated the liberation of Raqqa to women worldwide and to Ocalan, who is a dogged if unlikely champion of radical feminism and embraced by many Syrian Kurds as their leader, too.

During the course of the ceremony, the women unfurled a giant yellow banner featuring the mustachioed Ocalan’s face in Raqqa’s central plaza, where IS had carried out public beheadings.

Turkey seized on the spectacle as further proof of Washington’s connivance with “terrorists.” The Syrian Kurdish group is closely allied with the PKK, which is waging a ruthless and bloody campaign for self-rule in Turkey. As noted by the embassy, the PKK is on the United States’ list of terrorist outfits but the YPG and the YPJ are not. The omission has smoothed the path for what has become an unquestionably effective military partnership against IS. But it has also poisoned relations with a key if increasingly difficult NATO ally, Turkey.

In an apparent bid to smooth ruffled feathers, the US Embassy in Ankara posted its controversial statement but only in Turkish not in English as well. Similar rebukes came from the coalition spokesman, Col. Ryan Dillon. He said, “The Coalition does not approve of the display of divisive and symbols and imagery at a time in which we remain focused on the defeat of [IS] in Syria."

Many Kurds would beg to differ, and some analysts agree that if anything, Ocalan is a unifying symbol. Aliza Marcus is the author of “Blood and Belief,” one of the most authoritative books on the PKK. She told Al-Monitor in an interview, “The bigger the movement gets and the more territory it controls, the bigger need for ideology to hold together a more disparate group of fighters and backers. Ocalan is useful in that regard.”

A growing number of Arab fighters are joining the YPG and the YPJ rather than their fellow Arabs in the Syrian Arab Coalition. The latter is fighting alongside the Syrian Kurds under the umbrella of the Syrian Democratic Forces. One of the fighters featured in the YPG video described the US view of Ocalan as “a mistake” and “a bit behind the times.”

Ocalan has remained in an island prison off the coast of Istanbul since his capture by Turkish special forces in 1999. The CIA tipped them off on his whereabouts at the Greek ambassador’s residence in Nairobi, Kenya. He has remained incommunicado since April 2015 after the latest round of peace talks between the Turkish government and the PKK collapsed. Turkish authorities continue to deny access to Ocalan despite growing worries about the 69-year-old inmate’s health.