Is Abdullah Ocalan key to peace between Turkey, PKK?

Many Kurds believe Abdullah Ocalan holds the key to peace between Turkey and the Kurdistan Workers Party, but does he retain the power to deliver? 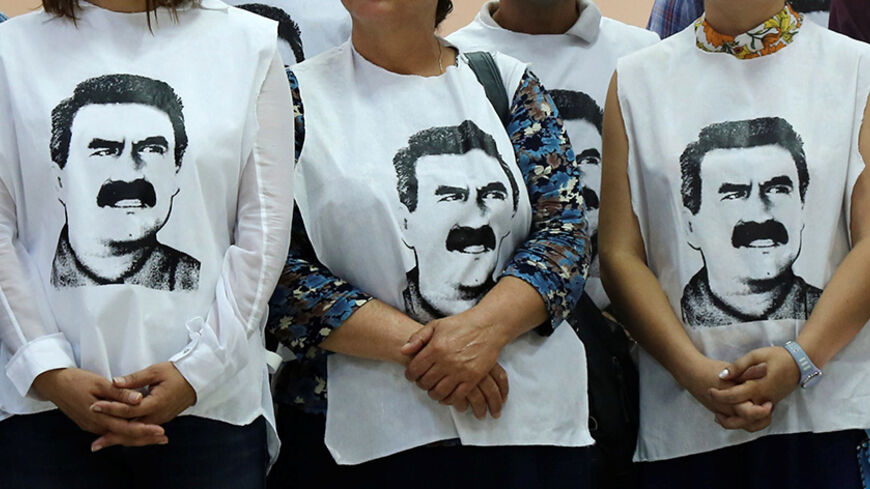 "Be Serok jiyan nabe!" The well-worn Kurdish adage means "no life without our leader." It was crafted for Abdullah Ocalan, the imprisoned founder of the Kurdistan Workers Party (PKK), which initially fought for independence then Kurdish self-rule inside Turkey, since 1984. The mantra has gained a new urgency after the botched July 15 coup. The rogue officers who were seeking to overthrow and kill Turkish President Recep Tayyip Erdogan were also allegedly planning to kidnap Ocalan from his island prison off the coast of Istanbul and murder him as well.

They almost succeeded, according to the pro-Kurdish Peoples' Democratic Party (HDP). Both PKK and HDP leaders claim that a group of helicopter-borne coup plotters succeeded in landing on Imrali and clashed with security personnel around Ocalan's prison before fleeing to Greece.

Justice Minister Bekir Bozdag has yet to either confirm or deny the allegation. But Bozdag has repeatedly denied that Ocalan came to any harm, saying he is in good health and that security measures around the prison have been reinforced. He insists the rumors about Ocalan's safety are being deliberately whipped up by the PKK and the HDP.

HDP lawmakers are among some 50 activists who launched an indefinite hunger strike on Sept. 5 to protest what they called a lack of news about Ocalan.

Bozdag has accused the group of spreading "unfounded information" about Ocalan's health and safety, so as to "mobilize the public for their own objectives."

HDP co-chair Figen Yuksekdag asserts that the best way the government can prove that Ocalan is alive and well is by granting access to him.

The PKK's top military commander in the field, Cemil Bayik, had harsher words: "Our patience has worn out … our leader Apo's [Ocalan's Kurdish nickname, which is a diminutive for Abdullah] health and safety is under threat. Therefore, everyone must rise up and do what they can."

As part of its mandate, the Committee to Prevent Torture (CPT), a monitoring arm of the Council of Europe, of which Turkey is a member, has made impromptu visits to Imrali and other Turkish prisons, and did so most recently in April. Ebru Gunay, a lawyer for Ocalan, told Al-Monitor that the government could have stifled speculation about Ocalan by granting the CPT access to him after the coup. In a Sept. 7 statement, the Council said it had visited three different prisons in Turkey between Aug. 29 and Sept. 6. Imrali was not among them.

The last time Ocalan was allowed to receive visitors was on April 5, 2015. They were a team of HDP lawmakers charged with relaying messages to and from PKK commanders in Iraqi Kurdistan, all part of the first-ever direct peace talks between Ocalan and the Turkish state. These had begun in late 2012, yet Ocalan's lawyers have been denied visits since July 2011 and his family members since October 2014. The stock excuse is that the ferries carrying passengers to the island "isn't working," Gunay said.

The talks collapsed last year when Erdogan abruptly walked away from a 10-point draft road map for peace that was unveiled by the government in February 2015.

The broad outlines of the agreement were that the PKK would disarm in Turkey and withdraw to Iraqi Kurdistan. In exchange, the government would enact constitutional reforms granting the Kurds political and cultural autonomy. Improved detention conditions for Ocalan would have been part of the deal.

A notorious micro-manager, Erdogan claimed he knew "nothing of it," even though he had publicly expressed hope that the talks would succeed.

In July 2015, a 2½-year-long cease-fire crumbled amid mutual recriminations, leading to the deadliest violence and most horrific rights abuses in decades. The International Crisis Group reported that between July 20, 2015, and July 19 of this year, at least 307 civilians, 582 members of the Turkish security forces and 653 militants had died as a result of the conflict.

The government has also ratcheted up pressure on the HDP, stripping its lawmakers of their parliamentary immunity and going as far as to indict several of its members, including the party's fiery co-chair, Selahattin Demirtas. Hundreds of Kurdish activists, politicians and journalists have been jailed, and the country's sole Kurdish language newspaper, Azadiya Welat, shuttered.

The conflict took a further violent twist when Turkish troops moved into Syria on Aug. 24 to battle the Islamic State (IS) but also to check the giddying expansion of the PKK's Syrian affiliate, the People's Protection Units (YPG) along Turkey's border.

There are growing fears that the nationalist rhetoric being pumped up by both sides could thrust ordinary Turks and Kurds into the kind of full-blown civil conflict that has been averted so far. "That is the greatest risk of all," warned Hisyar Ozsoy, an HDP lawmaker, in comments to Al-Monitor, pointing to a recent spate of hate crimes against ethnic Kurds. Many Kurds cling to the belief that Ocalan alone retains the power to end the fighting. "Only one person can solve the [Kurdish] problem, and that is Abdullah Ocalan," his niece and HDP lawmaker Dilek Ocalan, who is among the hunger strikers, told Al-Monitor in an interview.

Ocalan retains a cult-like following among millions of Kurds worldwide. Portraits of the burly mustachioed PKK leader adorn the walls of all official buildings in the YPG-controlled chunk of northern Syria known as Rojava.

His influence over the rank and file remains uncontested: When Ocalan was captured in 1999, over 100 of his supporters set themselves on fire in protest. Some of them died. Ocalan's intervention ended a hunger strike among PKK inmates in November 2012. And in February 2015 his call on the PKK's youth wing to bring down barricades in the southeastern border town of Cizre had an immediate effect.

Not all Kurds are enamored of "Apo." Many religiously conservative Kurds dislike Ocalan's embrace of socialism and near obsession with women's rights. Yet, attempts by would-be rivals within the PKK to dethrone him have failed. Aliza Marcus, the author of "Blood and Belief," an authoritative expose of the PKK, told Al-Monitor that Ocalan "remains incredibly relevant and critical to any peace process. He's what's held up the Kurdish national movement in Turkey."

A recently published compilation of transcripts of the peace talks between Ocalan, government representatives and HDP lawmakers — the latter address him as "baskanim," or "my president" — reveals that the famously egomaniacal PKK leader shares Marcus' views about himself: Peace is an impossible goal without him, Ocalan repeatedly suggests. More critically, the volume reveals just how far the peace talks had advanced and just how much influence Ocalan still wields over the PKK and the YPG.

The picture that emerges from the transcripts shows the government is clearly seeking to leverage Ocalan's hold over ordinary Kurds to drive a bargain mostly on its own terms. The biggest sticking point is Syria. Erdogan is cited as calling it "a red line," saying he would not allow the YPG to replicate Iraqi Kurds' quasi-state in northern Iraq. Ocalan ripostes that Syria's Baathist government cannot be permitted to "dilute" Kurdish identity.

Another hitch is the PKK's refusal to withdraw without some initial and concrete steps by the government. Frederike Geerdink, a Dutch journalist who has embedded with the PKK in Iraqi Kurdistan since late May, told Al Monitor, "The general view here is that the [Turkish] government was never serious about the peace process anyway."

Ocalan's continued isolation by the government may be calculated to bend his will, but analysts say this is likely to backfire. Arzu Yilmaz, a political scientist at the American University of Kurdistan, agrees that the government may have believed that his "god-like status" would enable Ocalan to sell the government's conditions to the Kurdish public and the PKK alike. But Yilmaz argued in an interview with Al-Monitor that this was unrealistic on several counts.

Since his capture in 1999, Ocalan's role has become largely symbolic, Yilmaz said. Moreover, the YPG's ongoing battle against IS in Syria has created a new set of dynamics where Ocalan's long-vaunted "strategic leadership" has been "eclipsed by military leadership on the ground."

Marcus concurs, saying, "Trying to pit Ocalan against the PKK won't work. Ocalan, more than anyone else, knows what the PKK as a military force can accept." The hunger strikers may well have to continue their protest indefinitely or accept "life without our leader."